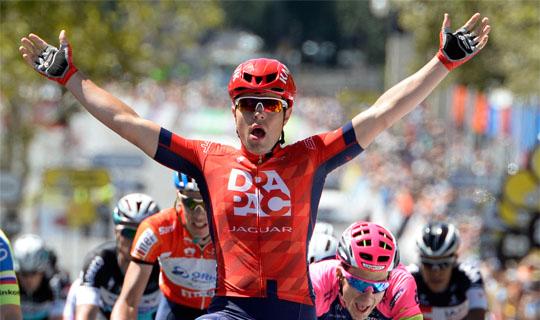 “It worked perfect today”, said a relieved-looking Wippert moments after the stage finish. “We planned to let a small break go. We could control it and we chased it down together with ORICA-GreenEDGE and one other team. The last 10km was just that fast with the tail wind so it was a really fast run in and the sprint went perfect for me. There was a little crash, which was not good – I was just lucky I could get past it. With 300m to go I felt pretty safe for the win. The boys rode the whole way on top of the bunch so when you finish first it’s like a great job for them as well.”

Three riders, Xue Chen (Giant – Champion System Pro Cycling), Kwon Soonyeong (KSPO) and Kim Okcheol (Seoul Cycling) broke away from the 119-strong field in the first 20km. Genki Yamamoto (Nippo – Vini Fantini) and Choe Hyeongmin (Geumsan Insam Cello) bridged to the trio shortly after, surprisingly eliciting little reaction from the peloton. After traffic issues caused a brief stoppage to the race after 46km of racing ? it resumed again at the 50km mark – the breakaway continued to extend its lead; at one point creating a healthy six-minute advantage.

As the day’s sole KOM (at 151km) approached, riders from ORICA-GreenEDGE, Drapac and RTS-Santic Racing slowly but steadily started reeling in the lead group. The pressure to maintain their lead on the ascent was already having an effect on the break and the last two holdouts, Yamamoto and Kim, were picked up by a calculating peloton within the final 20 kilometres. A crash within 400 meters of the finish line took race favourite Caleb Ewan (ORICA-GreenEDGE) and other key sprinters out of contention, leaving Wippert slightly fewer rivals to battle with for line honors.

Wippert was circumspect when assessing his chances to retain the yellow leader’s jersey all the way through to Seoul. “Our goal is to take as many stage wins home as possible. We’re not really looking to the GC because (stages) four and five is probably a bit hard for me, so the focus will be on the sprint stages. The teams are really small so it’s going to be hard to control an eight-day tour with five people. It’s not my goal (to win GC) but every day in yellow is really nice so of course we’ll try to get it one more day.”

GENERAL OVERALL CLASSIFICATION AFTER STAGE ONE

CLASSIFICATION LEADERS AFTER STAGE ONE 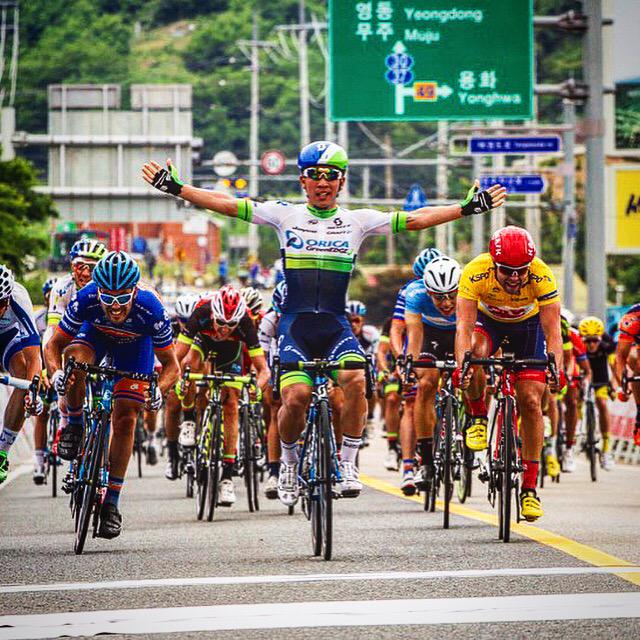 Fans  have been quick to throw their support behind Australian  ‘Boy Wonder’ Caleb Ewan, thanks in no small part to learning about his Korean roots. Today in Muju, Ewan – whose mother is Korean – delivered a “homecoming” victory of sorts, clearly beating Avanti Racing Team’s Patrick Bevin and race leader Wouter Wippert (Drapac Pro Cycling).

“It was good to have a bit of a drag race with Wouter and really see where I’m at against him and obviously he’s been going really well so it was good to get over him” said a beaming Ewan, still visibly battle-worn after being tangled up in a crash yesterday. “When I woke up I was pretty stiff and sore. Once my body warmed up and we got racing then everything seems to sort of numb and I was feeling alright halfway through the race. It was pretty hard in the end there, but the team did great to keep everything under control. All the little breaks (were) always kept within a few seconds so it was never really a big threat. I was feeling pretty good on the climbs as well.

“We’re hoping for more stage wins, but it will be interesting to see how the GC pans out. With six riders in each team it’s always hard to control the race. I think as long as Drapac and our team can co-operate, we should be able to keep everything in control.”

At 55km, four riders – Kazuo Inoue (Bridgestone Anchor Cycling Team), Kihong Yoo (Geumsan Insam Cello), Kyunggu Jang (Korail Cycling Team), Keisukke Kimura (Shimano Racing Team) – attacked and steadily started to increase their lead over the main bunch. Kyunggu Jang led through both KOM sections, with the remaining points traded amongst his companions. The break held onto a three-minute advantage over the peloton and, 60km from the finish, Jang started pulling away, gaining a lead of up to a minute. With 20km remaining, the peloton – once again spearheaded by Drapac – caught up with the break, leaving Jang as the lone escapee. Jang’s hopes of stage victory, if he ever harboured them in the first place, were dashed inside the last 5km and the race ended with a well-oiled ORICA-GreenEDGE sprint train setting Ewan up to win convincingly.

A clearly disappointed Wippert, who retains his yellow leader’s jersey by a narrow four seconds, voiced his frustrations at the lack of co-operation within the peloton and gave a clear message about the days ahead.

“We worked too hard for third place today”, stated Wippert. “It took 54km to get the break up the road and then on the hills the Iranians tried to smash it – that’s what they usually do as everyone knows – then it goes really fast and it was hard to follow them. Not even one other team helped us out, so in the end we were a bit less in numbers than the other teams.

“We were actually in a perfect position with 600-700m to go and then ORICA-GreenEDGE came along with two guys in front of Ewan and they had way more speed than us. Brownie (Graeme Brown) just waited a bit because there was someone else (blocking) before we could get out. I had to start my sprint at 500m and I came next to Ewan with 200m to go, but he was still sitting on his lead-out and I had already sprinted 300m – I had to, because there was nobody in front of me anymore. (ORICA-GreenEDGE) had a gap of a couple of meters, so I had to chase that down and I came up next to (Ewan) and at 150m he started off his lead-out and he’s just too fast.”