Despite numerous attacks on the final kilometers, Monday’s stage of Tour de Suisse ended in a sprint within a reduced group. Peter Sagan proved to be the fastest man up front when he outsprinted Daniel Moreno and Thibaut Pinot.

Today’s stage started out in a very tough way, with the riders having to climb the Gotthard-Pass (2093 meters above sea level) right from the beginning of the day. Stefan Denifl (IAM Cycling) and Marco Marcato (Wanty – Groupe Gobert) were the first riders to get away. Branislau Samoilau (CCC Sprandi Polkowice) then decided that he wanted to join the action. The Belarusian went solo to bridge the gap, which he managed to do on the first part of the following descent.

The front trio worked well together and quickly established a solid gap to the pack. With 40 km to go, the peloton was still more than six minutes behind the break. None of the three riders was a real threat to Tom Domoulin’s overall lead. Therefore, Giant-Alpecin didn’t seem to be in a hurry to rail them back in. Tinkoff-Saxo, however, had other plans. With Peter Sagan as one of the top favorites for the stage, the Russian team hit the front and set a furious pace.

As the break started on the penultimate climb of the day – with less than 20 km to go – the gap was down to under two minutes due to Tinkoff-Saxo’s hard work. Marcato lost contact with Denifl and Samoilau and he was caught by the peloton soon after. The GC riders kept quiet but on the top of the climb, the leading duo had a gap of just 33 seconds.

After the technical descent, it didn’t take long before the two riders at the front were caught by a select group of riders led by home favorite Michael Albasini (Orica GreenEdge) and overall favorite Jakob Fuglsang (Astana). Albasini then attacked with 8.6 km to go. Only Jan Bakelants (Ag2r) proved capable of following the strong Swiss rider. A few kilometers later, Sergio Henao (Team Sky) went clear and neutralized the breakaway. Numerous attacks occurred on the following kilometers but at the end, it all came down to a sprint.

Daniel Moreno (Katusha) started his sprint early but Sagan didn’t let him get away. The Slovakian seemed to have everything under control and he had no problems overtaking Moreno before the line. Behind the two riders, Thibaut Pinot (FDJ) fought off Julian Arredondo (Trek) to take third place on the stage. Today’s win is Sagan’s 10th stage win in Tour de Suisse history.

Tom Dumoulin finished 5th on the stage and thereby kept the yellow jersey. Dani Moreno (2nd) and Peter Sagan (3rd) are both just five seconds behind the Dutchman in the general classification. 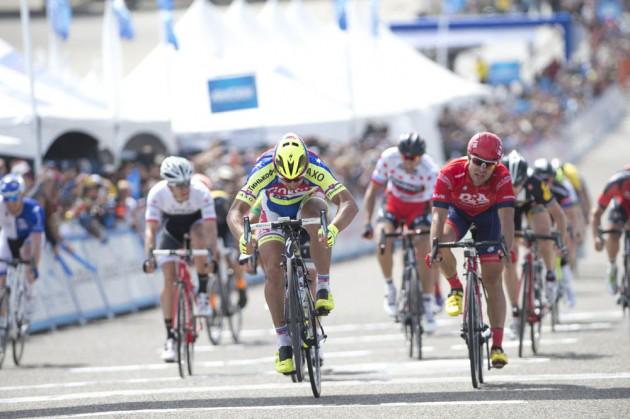