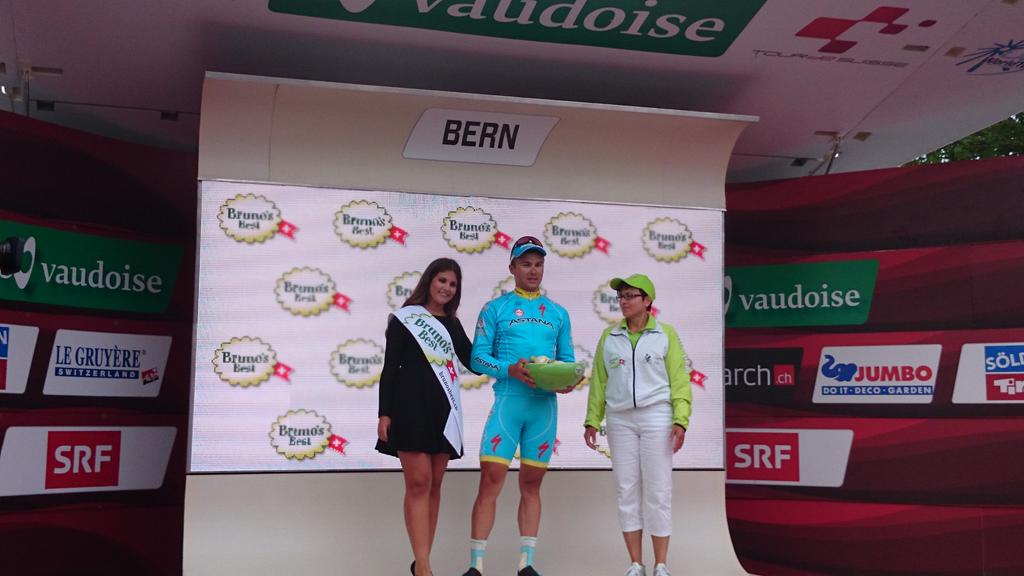 The former U23 world champion put on a fantastic performance when he attacked out of a strong breakaway on the last 20 km. Thibaut Pinot lost a few seconds in the general classification but he remains in yellow before tomorrow’s time trial.

Soon after the official start of the stage was given, a group of 12 riders got a small gap on the peloton. Amongst the riders at the front were the Swiss champion Martin Elmiger (IAM Cycling), Fränk Schleck (Trek), Michael Albasini (Orica GreenEdge) and the world champion Michal Kwiatkowski (Etixx Quickstep). In fact, both Trek and Etixx Quickstep had no less than three riders in the break. Tinkoff-Saxo had big plans with Peter Sagan today and therefore, they weren’t interested in letting the break get away. After a furious chase, it was all back together again.

The attacks continued on the following kilometers with many prominent names trying to distance the peloton. Finally, 19 riders managed to get away. This time, Tinkoff-Saxo had a rider amongst the escapees, leaving the rest of the team to sit back and relax in the pack. Kwiatkowski and Albasini made the break once again. So did other strong riders like Warren Barguil (Giant-Alpecin), Jan Bakelants (Ag2r), Winner Anacona (Movistar) and Jurgen Roelandts (Lotto Soudal).

In the peloton, FDJ started to work. With Barguil being only 4:52 minutes behind Thibaut Pinot in the general classification, the French team couldn’t allow him to get too much of a gap. Team Sky also contributed to the work in order to not jeopardize Geraint Thomas’ second place overall. Together with Cannondale Garmin, they made sure that the breakaway never got more than two and a half minutes on the pack.

Out on the last lap around Bern, the riders at the front group started attacking each other. The former U23 world champion, Alexey Lutsenko (Astana), put in a powerful move with about 20 km to go. The pace turned out to be too fast for Kwiatkowski who had to let go on the following ascent. Bakelants was quick to bridge the gap to Lutsenko but he didn’t have enough power to contribute much to keeping the chase group at bay. However, Lutsenko proved to be having a great day. Thanks to his hard work, the duo managed to stay clear. Despite his big effort, the young Kazakh had no problems winning the final sprint. Bakelants finished second, while Barguil crossed the line in third place 17 seconds later.

Due to a split in the peloton, once again Pinot lost a few seconds to the nearest rivals in the general classification. The Frenchman still leads overall but he’s now just 34 seconds ahead of Thomas. Simon Spilak (Katusha) is third, 47 seconds down.

The last stage of the race takes place on Sunday. Thirty-eight undulating kilometers against the clock will determine who will be crowned king of Tour de Suisse 2015. For the last two years, the overall winner didn’t wear the leader’s jersey at any point until the end of the last stage. It will be interesting to see if this odd tradition continues tomorrow.