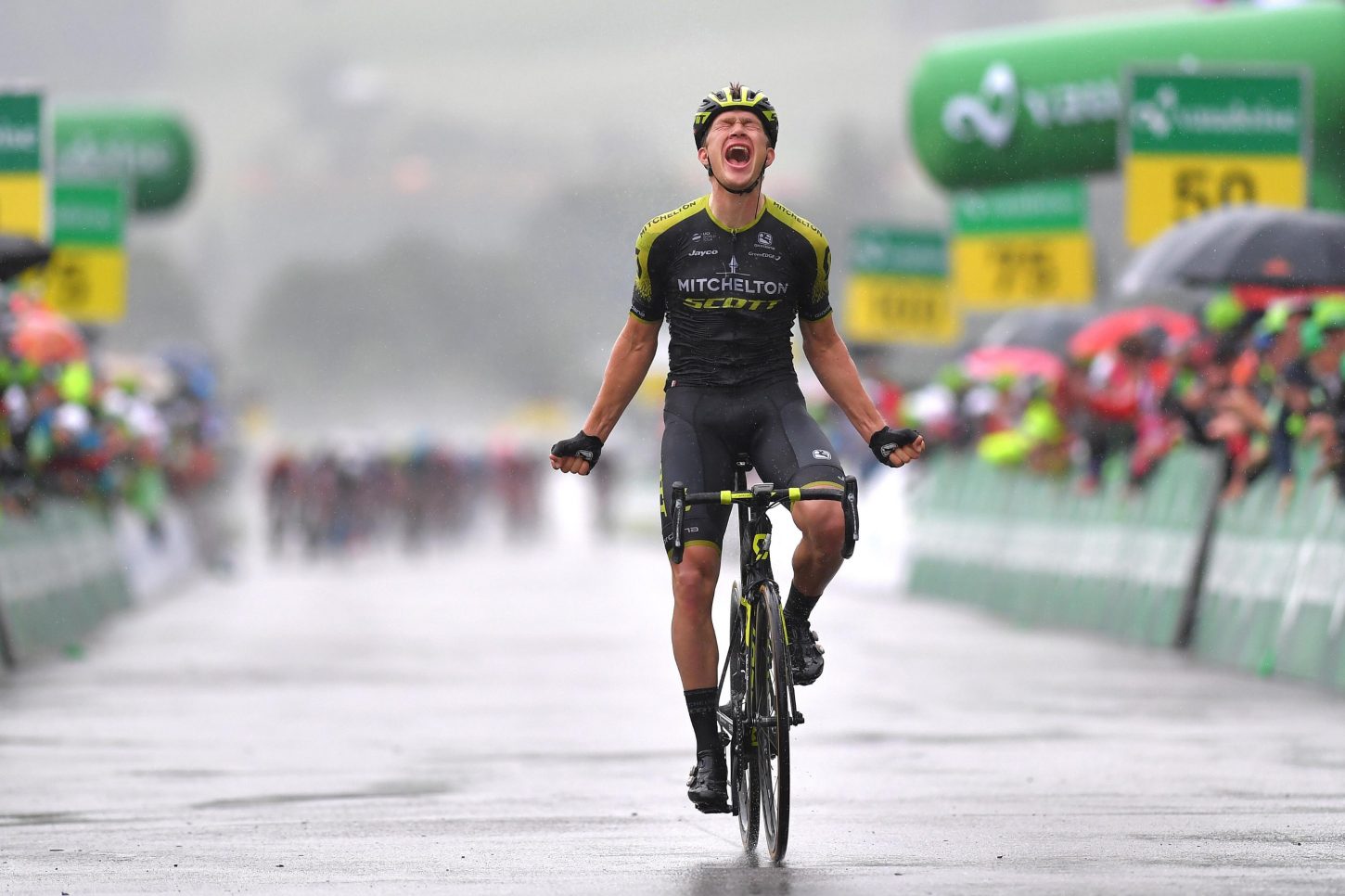 Chris Juul-Jensen took an impressive victory today on the fourth stage of the Tour de Suisse after attacking away from the day’s breakaway to win solo in tough, rainy conditions

“I’m super happy, we didn’t expect to stay away on a day like today but when we had two minutes at the bottom of the climb, then suddenly the break started to believe it was actually possible. I am over the moon”, said Juul-Jensen.

“Coming out of a great Giro with Mitchelton-SCOTT, I felt I had good form and when he (Peters) attacked I kept him at a relatively close distance and I could see that he was maybe taking the corners slightly slower then I was. I was closing the gap and decided to make the most of it before it was too late.

“It was a long three kilometres on the airfield here but it is a fantastic feeling. Especially here, being in Switzerland with the king of Switzerland on the team, I am happy to pull out a good result.”

After spending all of today’s stage in the breakaway, Juul-Jensen jumped away with Nans Peters (AG2R) on the final climb of the day with 10 kilometers to go.

The 28-year-old showed great determination by attacking solo in the final three kilometers to hold off the peloton by just eight seconds to claim his first victory of the season for Mitchelton-SCOTT.

After racing aggressively and jumping across to the breakaway yesterday, Juul-Jensen took his chances once again by making it into the six-rider breakaway that formed within the opening kilometers of today’s 189 kilometer stage from Gansingen to Gstaad.

The Danish rider, along with other five escapees worked together to gain an advantage of over six minutes ahead of the peloton.

As the rirders entered the final half of the stage, the rain began to pour down and the leader’s advantage plummeted down to two minutes.

With 10 kilometers, to go on the final second category climb of the day, the breakaway riders started to believe they had a chance and began to attack one another which saw Juul-Jensen head away with Peters.

On the final descent to the finish line, the peloton swept up the other leaders leaving only Juul-Jensen and Peters out front as the weather condition continued to deteriorate further.

Peters actually distanced the Mitchelton-SCOTT rider and with the peloton sat just 20-second behind, it looked like Juul-Jensen’s chances were over. However, he continued to fight on to regain contact and shortly after attack Peters with three kilometers to go.

As the 28-year-old entered the airfield, it was touch and go if he would be caught or not but he maintained a small distance, enough to claim the victory.

Meanwhile, Stefan Küng (BMC Racing) finished safely in the reduced peloton to maintain his hold on the overall race lead.