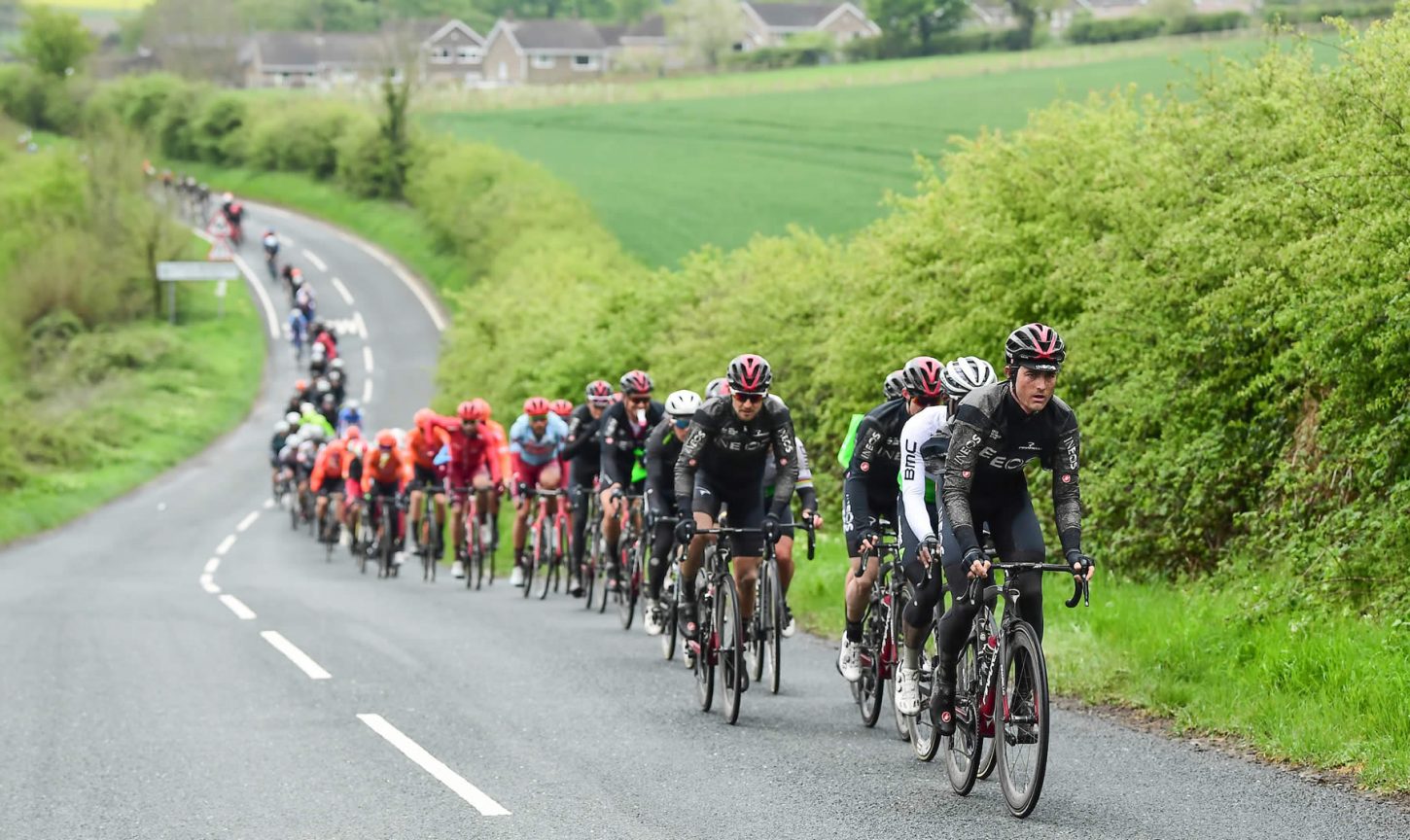 Rick Zabel (Katusha-Alpecin) was a surprise winner of stage two of the Tour de Yorkshire 2019 in a thrilling bunch sprint in the North Yorkshire town of Bedale. Zabel held off a group of British sprinters including Daniel McLay and Mark Cavendish to clinch the victory for Katusha-Alpecin.

The French rider Fabien Grellier (Direct Energy) set the tone for the 132km stage with a fast start to the day and was soon joined out in front by five other riders including Team Wiggins duo James Fouche and Rob Scott, and Scott’s fellow Briton Tom Stewart.

They led the race up Cote de Lindley and into Harrogate, where the peloton got to sample September’s Road World Championship course, and where Mark Cavendish took time on the front to wave to the dense crowds in an area where some of his family hail.

The peloton eventually swallowed the break with 10 kilometers to go, only for another little attack group to shoot off the front and disrupt the sprint teams’ plans. But when the heavens suddenly opened, the rain slowed the leaders and everyone came back together.

That produced a sprint finish which was up for grabs, and it was Zabel who moved clear to the front and stay there right to the line, winning by a length.

Three of these riders would take the sprint points too as Tom Stewart crossed the Pontefract line ahead of Jake Scott and Chris McGlinchey. The break was then joined by two more riders in the form of WIGGINS teammates James Fouché and Robert Scott.

With 12 kilometers to go until the day’s only classified climb at the Cote de Lindley, the break was still out in front, although their lead had been cut to around a minute twenty.

It was one of the WIGGINS riders who animated himself enough to take the King of the Mountains points, as James Fouché raced ahead of sprint winner Tom Stewart with Chris McGlinchey taking another third place.

From there, the riders got their first and only look at the UCI Road World Championships circuit under race conditions and it seems that the crowd had the same idea as droves of supporters lined the route and watched the peloton ride up Parliament Street and past what will be the finishing straight in September.

Harrogate also saw the second sprint of the day and roles were reversed from the first sprint as Jake Scott took the spoils ahead of Chris McGlinchey and Tom Stewart.

With only a 60 second advantage as the race left Harrogate, it was thought that the bunch sprint would eventually be caught – the peloton wanted no part of another breakaway stage win.

With 16 kilometers to go, the breakaway riders start to attack each other ahead of the advancing bunch but it was only around 3km to go that the peloton finally regrouped. It was here that the sprint teams started to organise themselves and a bunch sprint ensued.

A few riders looked as though they could take the stage but an emphatic ride from Rick Zabel gave Katusha-Alpecin their first stage victory in Yorkshire.

Continuing Roompot-Charles’ great form at this year’s TDY, Boy van Poppel took second place and with it the Asda points jersey; ahead of Team INEOS’ Chris Lawless who took third.