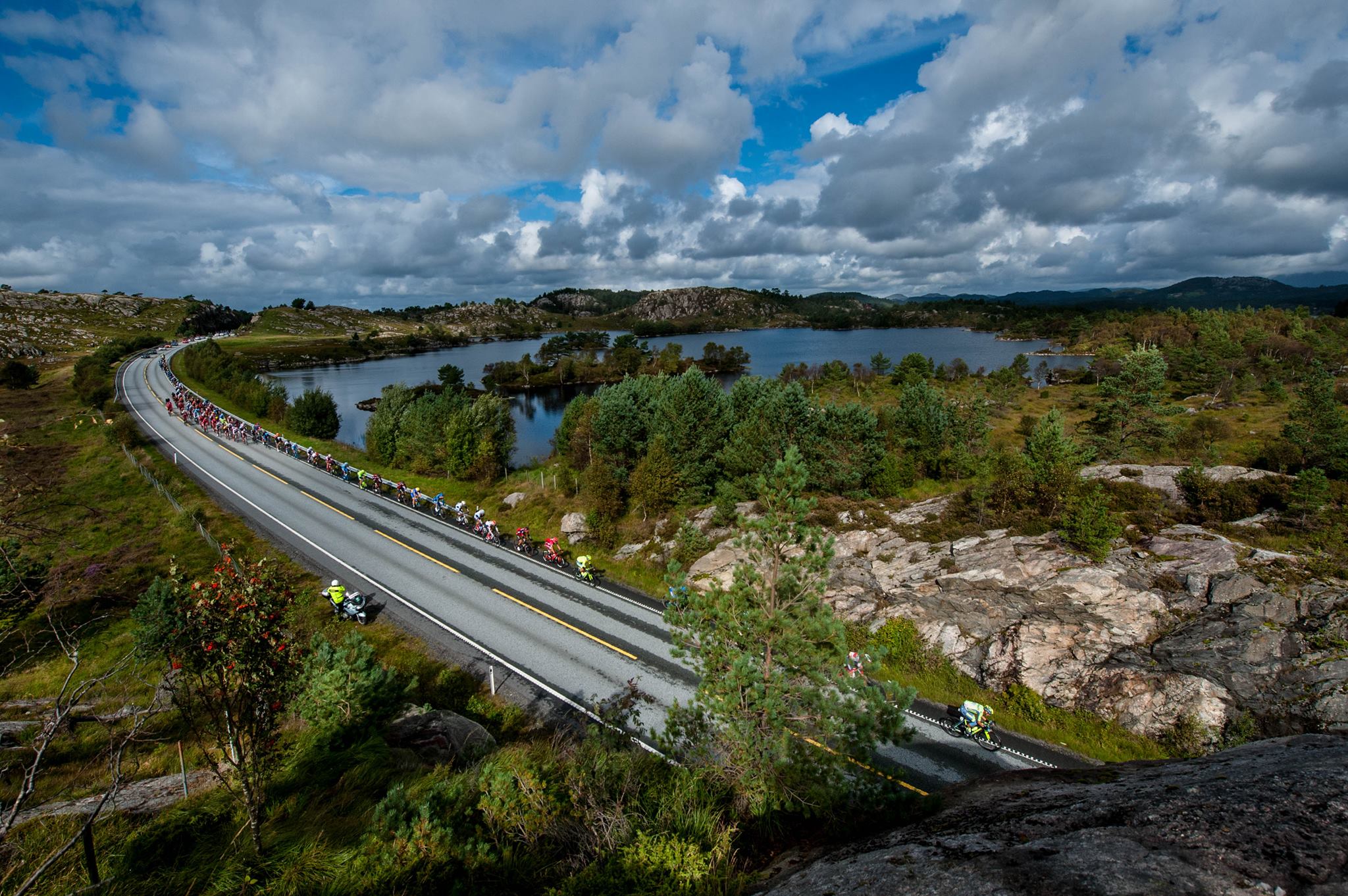 Local hero Alexander Kristoff (Katusha) made it two in a row after chasing down a three-man break to claim stage 3 (221km) in a sprint finish at Tour des Fjords (UCI 2.1) in Suldalsosen, Norway, on Friday, September 3.

The 2014 race winner outsprinted Dutchman Nick van der Lijke (Roompot-Oranje Peloton) and German Jonas Koch (Verva ActiveJet), both of whom helped the 29-year-old Norwegian bridge the gap to catch the remnants of a seven-man break.

“The pack was not really strong enough to catch back and over the top I tried to keep the speed and then sprinted a little bit on the descent,” explained Kristoff. “At the bottom I saw I had a gap and I just kept on going. Two guys managed to bridge up and then me and the ActiveJet guy, who was also doing a good job and doing strong pulls, managed to come back and I was really happy when I saw the time go down.”

“In the sprint I was the strongest, but I had to go from the front so it’s not ideal,” he continued. “Normally I should beat them in the sprint anyway, no matter the position I start.”

Dutchman Pieter Weening (Roompot-Oranje Peloton) and two BMC riders Michael Schar (SUI) and Damiano Caruso (ITU) were all that remained from an initial seven-man break launched at the 68km mark before the first of two climbs, including Røldalsfjellet, which rises from 100m to 1130m in elevation on a narrow, rarely-used carriage road before descending steeply into the fog and ascending Kringletjørn (981m) just 9km later.

“It was a terrible day out there,” said Shar, who was named the ‘most active rider’ on the day. “It was really cold and rainy up in the mountains. We tried to open up the race because we have no chance to sprint against Kristoff.

“Damiano and I gave all we had all day long, but unfortunately with 3km to go he caught us, and after 220km you are on empty with nothing else to give.”

“I am very happy with the win today and to take the jersey,” said Kristoff. “It’s my home race, but still not in my home city. The last two days are in my home training ground (Stavanger) and I know every corner, so I look forward to racing there.”

It was the longest stage in the five-day race with Alexander Kristoff taking up the chase on his own to ensure he was part of the action for the finish. In the end, the Norwegian rider took his second win in as many days, crossing the finish line at the front in Suldalsosen, marking his eleventh win for the 2016 cycling season.

The win and gap to the main field also gave Alexander Kristoff the yellow jersey and the lead in the general classification. With two stages to go, the Team KATUSHA rider leads by 20-seconds to Michael Schar of BMC and van der Lijke. Besides, Kristoff took control over the point classification (blue jersey).

“It was a little bit like a classic today. It was a long race and horrible weather conditions. At the end I saw we did not have the power to close the gap to the strong three guys in the front so I made one big attempt to do it myself and I’m happy it worked out in the end. I can’t predict on the GC yet. There are still two more days to go and tomorrow is a very hard day. Maybe if I still have the lead after tomorrow I think I have a good shot, said Alexander Kristoff.

Saturday’s stage 4 is familiar terrain for Alexander Kristoff with the stage beginning in his home town of Stavanger. At 165,6 km, the stage ends in Sandnes and promises to be a difficult day on the bike.