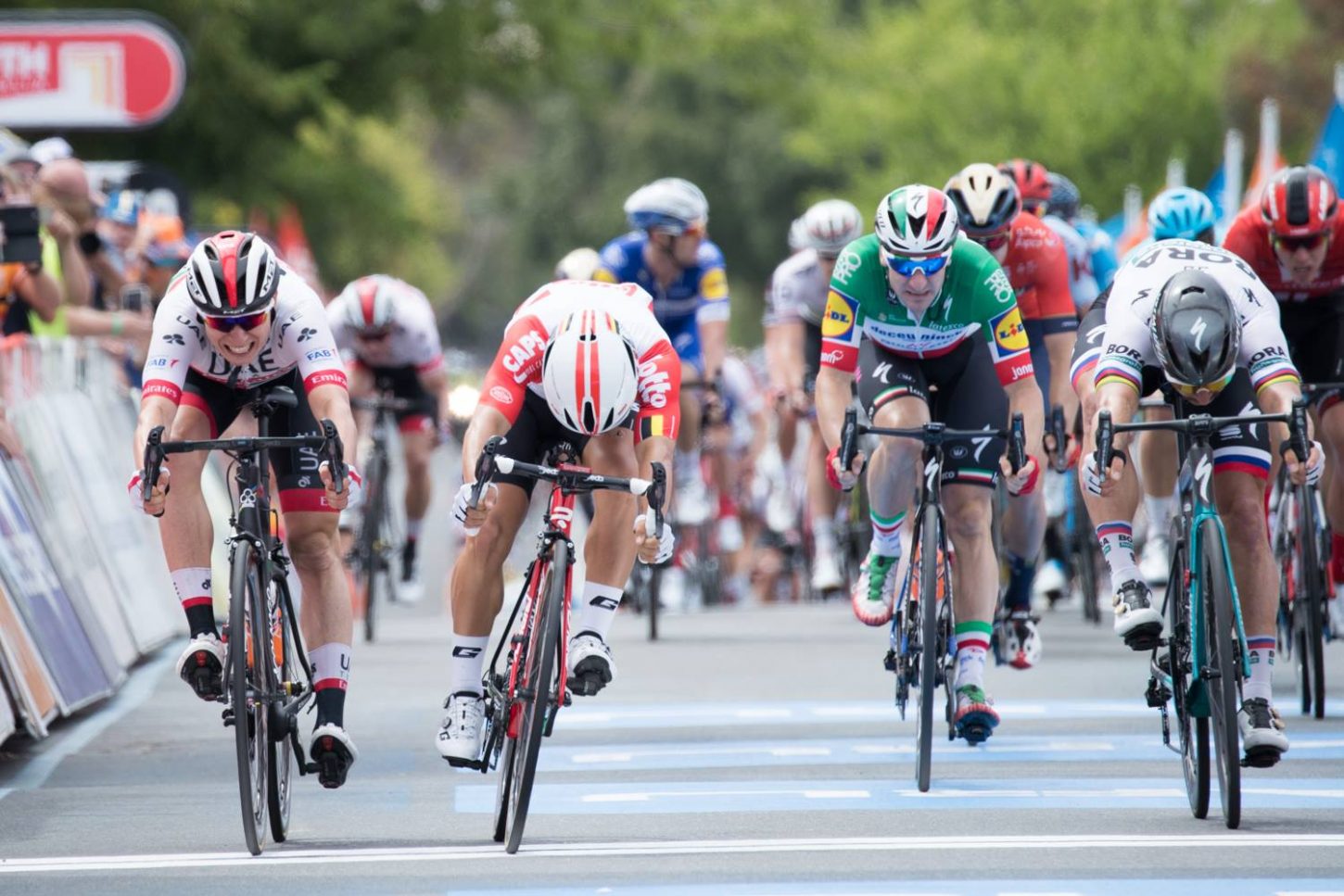 JASPER PHILIPSEN has claimed UAE Team Emirates’ first stage win at the Santos Tour Down Under amid a controversial finish during today’s stage 5.

While Lotto-Soudal’s Caleb Ewan crossed the line first, commissaires reviewed the final kilometre of the stage and found his sprint to the finish to be in breach of UCI road racing regulation 2.12.007 Article 5.1. The article polices deviations from the chosen line obstructing or endangering other riders or an irregular sprint.

As a result of the finding, Ewan was relegated to last place in the group, deducted 15 points from his place in the Ziptrak points classification and imposed a 30-second penalty on his overall race time.

Consequently, 20-year-old Belgian Philipsen recorded just his second career win, and first on a UCI WorldTour stage. Phillipsen has been a competitive sprinter all week – having finished no lower than sixth in the other two sprint-finish stages (Ziptrak Stage 1 and Novatech Stage 2).

It also marks UAE Team Emirates’ first Santos Tour Down Under win in its time as an Emirati-based team, and second as the continuation of the former Lampre team.

Gallant recovery from crash for Ochre-wearer

While the dramatic result to the race will have fans talking after a big day in Strathalbyn, it was a crash that felled Santos Ochre Leader’s jersey-wearer Patrick Bevin (CPT) just 10km from the finish line that will draw the sympathies of the peloton and fans alike.

The New Zealander hit the road with a group of riders on the approach to the finishing town, and was aided by teammates back to his bike.

Flitting through the convoy back into the peloton in obvious pain, he managed to finish the race in the lead group.

It was an impressive result, particularly given the peloton’s seemingly sportsmanlike behavior in awaiting the recovery of the race leader, rather than pressing to the finish without him.

The Ziptrak Sprint, Subaru King of the Mountain and Southaustralia.com Young Rider classifications are set to be decided on Be Safe Be Seen MAC Stage 6 on Sunday.

With Peter Sagan (BORA-hansgrohe) promoted to second in the bunch sprint in the official results, the stage is set for a close finish.

Jason Lea (UniSA-Australia) continues to lead the Subaru King of the Mountains classification after collecting more points atop Sellicks Hill at the start of the stage. He leads George Bennett (Jumbo Visma) by 14 points overall.

With a maximum of 16 points up for grabs on each of the Willunga Hill climbs on Sunday, that lead is by no means secure.