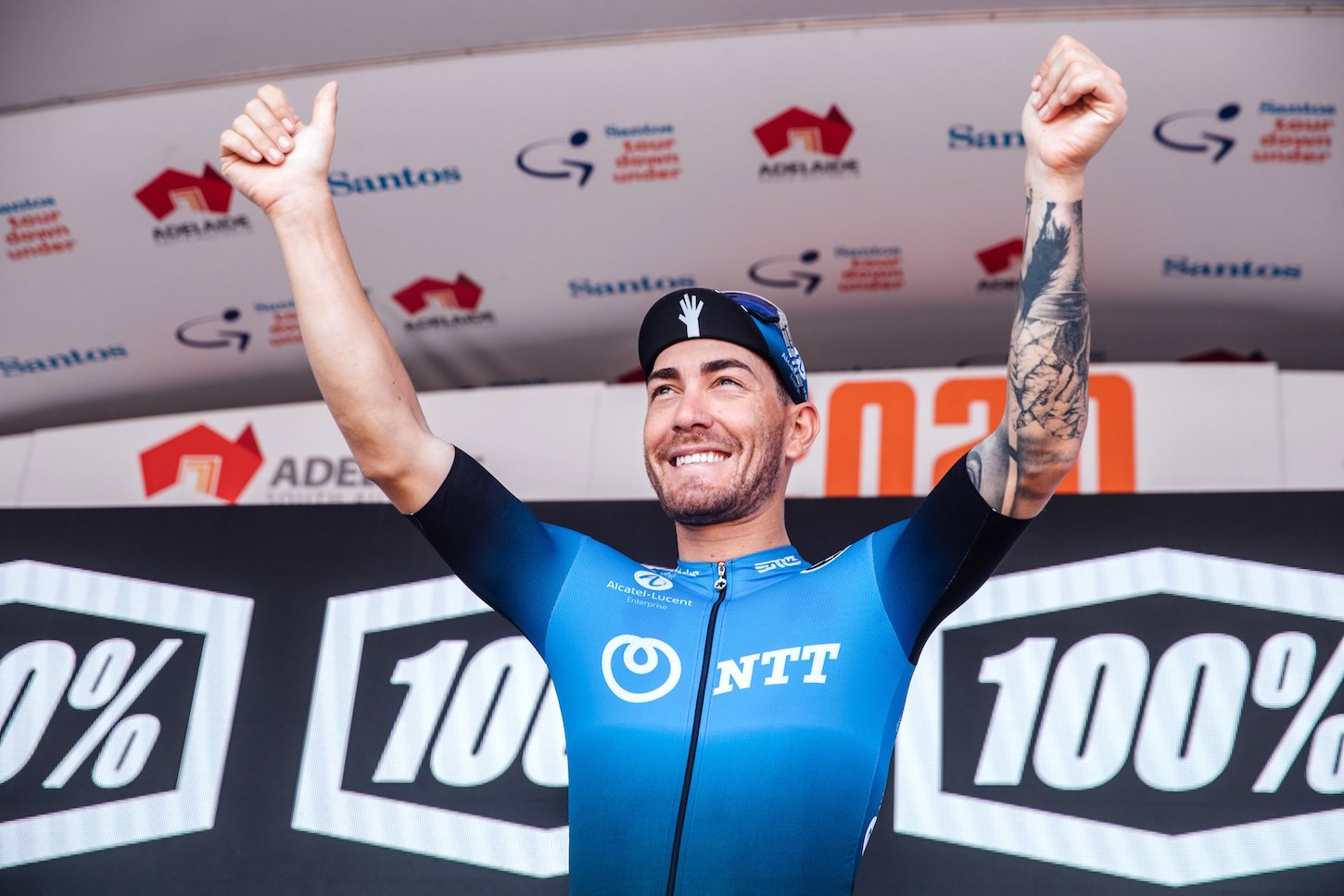 “I don’t know if it’s enough but we’ll know tomorrow but we have given ourselves every chance to try and win this bike race.”   is back in the lead of the Tour Down Under. He did it with grit and determination at the intermediate sprints.

Impey did what he’s done year after year since Richie Porte won the title in 2017. He did it in a way everyone is becoming accustomed to but that doesn’t mean the other teams have an answer to what the South African from the Australian-registered WorldTour team, Mitchelton-SCOTT, has done so well in January in recent years.

“We did exactly as we planned on the climb,” continued Impey who stole the Ochre Leader’s Jersey off Porte with one day remaining in the six-stage event.

“Lucas did a hell of a tempo up the climb,” said Impey of the rise that peaked 20km from the finish of 100% Stage 5 in Victor Harbor. “We had a very select group and I was praying that group would make it to the line because I fancied my chances there.

“The sprinters brought us back in the end but I’m really chuffed with today.”

At the first Ziptrak Sprint (at McLaren Flat, 33.8km) he couldn’t overcome the world champion, Porte’s team-mate Mads Pedersen, who earned first place and the three-second time bonus. But the two-second bonus for second meant he was closing in on the virtual lead of GC: just one second separated Porte from Impey – and more was yet to come.

At the second Ziptrak Sprint, Impey was first, propelling him into the virtual lead thanks to the time bonus. And, try and Pedersen did to absorb more bonuses, he crossed the line in Meadows in third place after 56km of racing.

It can get complex but the basics is this: time bonuses have often helped seal the title of the Tour Down Under. Again, these extras from the Ziptrak Sprints are having an impact on the final GC result, but that doesn’t mean the pure sprinters – i.e. the guys who know they won’t be able to climb with Porte or Impey on the ramp to the finish on Old Willunga Hill tomorrow – are still also vying for the points on offer.

That’s why Jasper Philipsen, the runner-up on day one, was there to interrupt the GC narrative at the second Ziptrak Sprint. The young Belgian leads the Ziptrak Sprint classification (now with a total of 63pts, well ahead of Impey’s 48 and Caleb Ewan’s 47).

Philipsen had a reason to be in the mix. He wants the blue jersey, a prize he seems assured of winning in his second attempt at the TDU…

Meanwhile, however, the men chasing the Ochre Leader’s Jersey on Sunday were also keen to sprint for the extras on offer. And Impey’s conquests added up to him muscling his way ahead of Porte in the overall rankings.

The fifth stage was a race of two parts. The first act, was up until the Ziptrak Sprint points (and crucial time bonuses). Then came the quest to eliminate sprinters like Philipsen and Ewan, and – so the theory goes – give Impey a chance of winning a stage with his puncheurpanache, taking the 10-second bonus and giving himself a buffer in advance of the inevitable attack that’s going to come on what is parochially known as Richie Porte Hill (aka. Old Willunga).

“Everybody knows that Richie is going to attack between 1.3 and 1km to go,” said Mitchelton-SCOTT’s sporting director, Matt White. “And we’ll see who can hang on.”

Like Impey, White is chuffed that the team has the leader’s jersey after five stages but they want it after six, when it becomes the winner’s jersey. But he’s also realistic.

No one has beaten Richie Porte on Old Willunga for six years. It has become an iconic climb in Australian cycling and everyone knows how the Tasmanian has won there. For six years in a row, he begins his final surge around the same mark. Just because it’s predictable, however, doesn’t mean there’s a remedy to overcome the phenomenal acceleration Porte has on an incline.

Impey can hang tough in such situations, as he did last year, but he needs a buffer because there’s almost an acceptance that Richie will win and in so doing earn a 10-second bonus for his first place.

After five stages and 718.7km of racing, Impey’s advantage over Porte is just two seconds.

“Everyone knows Richie has got great climbing form and he’s going to attack,” said White while Impey was collecting his first ochre jersey of the 22nd edition of the TDU.

“Daryl is going to do what he can and we’ll help him, as much as we can, to hang onto that jersey tomorrow. But it’s certain: our backs are against the wall, that’s for sure.”

The effort by Mitchelton-SCOTT to isolate the sprinters going over Kerby Hill on the approach to Victor Harbor did split the peloton. It did lure a mix of strong riders to the fore. It did give Daryl a rush of adrenaline and the belief that he might earn some more bonuses in the sprint.

But it wasn’t enough to eliminate Porte.

Richie Porte is the best climber in the race. But, for a moment, he looked as though he too was prepared to have a crack in the sprint… should it have come to that. But it didn’t.

Instead, what happened was that the surge over the climb sapped some of Impey’s strength and, once his group was caught, he didn’t have time to recover enough to take on the pure sprint specialists.

What’s that all translate to? Another battle of the lead-out men in advance of the rush to the line. And, this time, there was a chance for another team to celebrate.

Words of advice from Bjarne Riis, the new co-owner of NTT, were delivered in the morning and riders from the South African team paid attention. They were assigned roles, told how to manage the final climb, and encouraged to overcome their fears and take on Ewan and Sam Bennett and his ‘wolfpack’.

They found a solution too. Coming out of the final corner, Ryan Gibbons, NTT’s final lead-out man for sprint specialist Giacomo Nizzolo was fourth wheel. Ahead of him was Giacomo himself, along with Cofidis’ Simone Consonni and Ewan’s lead-out maestro Roger Kluge.

What made the difference for Nizzolo – who’d go on to take a fine victory, the first for the recently renamed NTT team (formerly Dimension Data) – was Gibbons’ tactical decision to allow the trio ahead of him to continue. Knowing that his job was done, Gibbons deliberately sat up and opened a gap that Sam Bennett had to overcome if he were to win.

The Irishman was the fastest in the sprint but the extra distance limited his hope of a second stage victory in this year’s TDU. Instead he finished third while Nizzolo celebrated.

“Of course, I can’t thank the team enough,” said the Italian from NTT Pro Cycling.

“Today we were great. The plan was, if I were dropped, they had to wait for me on the climb,” he said of a momentary crisis at the time of the surge by Mitchelton-SCOTT on Kerby Hill.

It was all part of the pep talk from Riis who instructed each rider where to be, and when.

They waited. They got their sprinter back into the mix. And then managed a lead-out in perfect style.

“They did a great job and then I just put everything I had into the pedals and I’m so happy.”

The 149.1km fifth stage of the 2020 Santos Tour Down Under got rolling a little earlier than usual. The peloton rolled away from Glenelg at 10.40am and, after brief neutral zone, racing commenced at 11.00am. There were two abandons overnight: Laurens De Vreese (Astana) and Szmon Sajnok (Israel Start-Up Nation); added to the withdrawals during southaustralia.com Stage 4 – both Tyler Lindorff and Kelland O’Brien (UniSA-Australia), victims of crashes on Friday, there are now 133 riders still competing.

Early attack: over before the Ziptrak Sprint

It took 2.5km before Axel Domont (AG2R La Mondiale) became the first breakaway rider of the stage to Victor Harbor but the Frenchman only enjoyed a maximum advantage of 50 seconds. Why didn’t he get further? Well, it’s obvious: Daryl Impey and his Mitchelton-SCOTT team wanted the chance to sprint for time bonuses. And if Daryl wants to sprint, then escapees don’t get an early opportunity. That’s how it’s been for a couple of years at the TDU and the script is being repeated in 2020.

Domont’s move was over 5km before the Ziptrak Sprint at McLaren Flat (33.9km) and guess what… yep, got it in one: Mitchelton-SCOTT dominated the head of the bunch and then kept the pace high on the approach to the site where points and time bonuses are on offer.

In a hotly contested sprint, we saw the world champion Mads Pedersen (from Richie Porte’s Trek-Segafredo team) take 5pts and the three-second bonus. Impey was second in the sprint: 3pts for the South African champion and, crucially, two-seconds off his cumulative time. This shifted him even closer to Porte’s GC lead; only one-second separated last year’s champion from the leader in 2020 (and winner of the TDU in 2017).

A climb, a split, a chase… a sprint

The story of the finale is explained above. Kerby Hill had an impact. It hindered a sprinter who would recover enough and go on and win thanks to the support of his team-mates. It prompted a split in the peloton. It provided a platform for Lucas Hamilton to demonstrate why he is one of Australia’s brightest cycling prospects. It also allowed Team INEOS to show that each of the three that were given leadership roles – Rohan Dennis, Pavel Sivakov (who successfully defended his white jersey as University of South Australia Young Rider) and Dylan van Baarle – to show what classy riders they are.

But it didn’t do what Impey would have liked. Instead of catching Porte unaware or gaining enough time to eliminate the sprinters, it lured the race leader to the fore.

Porte claimed first-place points on the climb and although he’s now ranked second in the Subaru King of the Mountain classification (trailing the CCC Team’s Joey Rosskopf who has 35 points, nine more than Porte), that’s not the main concern of Trek-Segafredo’s leader.

Porte has come to win the TDU and although he’s second after five stages, the assumption from many – including the new team leader – is that he will indeed win again on Old Willunga. If that happens, he’ll earn his second TDU title.