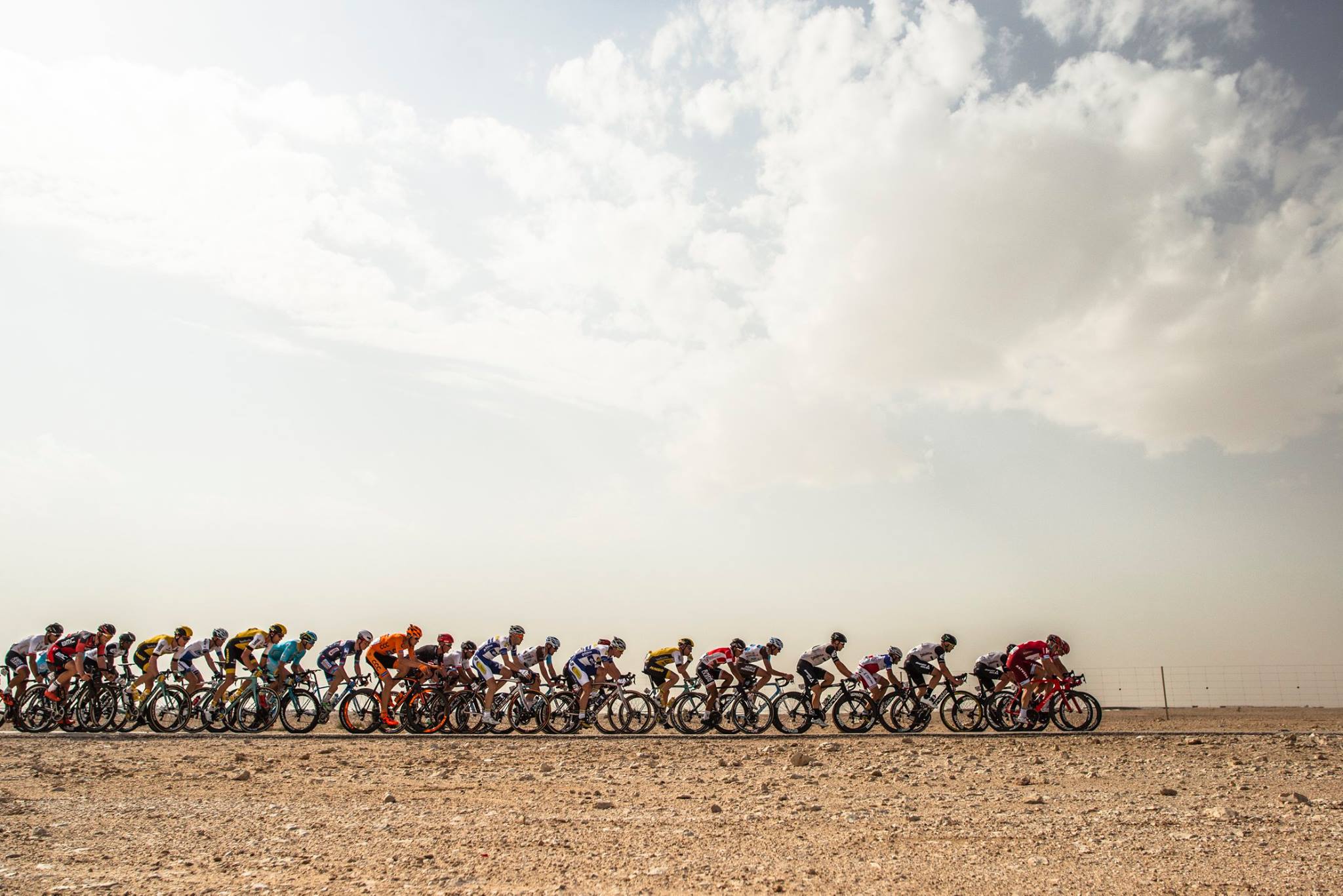 Alexander Kristoff (Katusha) claimed stage 2 of the Tour of Qatar today, nixing Mark Cavendish (Dimension Data) on the line in a sprint finish by less than a bike length to take the stage honors.

Meanwhile, Roy Jans (Wanty-Groupe Gobert) rounded out the podium in third place, after a late crash in the peloton claimed numerous riders.

From there, the escapee’s lead would fluctuate back and forth, until they were eventually reclaimed by the peloton at the 32 kilometer mark.

Shortly thereafter, a split occurred in the peloton, creating as many as four groups, while riders like Alexander Kristoff (Katusha), Andrea Guardini (Astana) and Greg Van Avermaet (BMC) lead at the front.

From there, the lead group went on to establish an 18 second lead over the chase, while Kristof took the first of the intermediate sprint points ahead of Edvald Boasson Hagen (Dimension Data) and his teammate Vyacheslav Kuznetsov.

As the race reached the 75 kilometer mark, Alexander Kristof et al were still holding onto a 50 second lead over the chase group containing Cavendish.

However, heading into the final 65 kilometers, the breakaway group’s advantage started to dwindle, prompting fellow escapees, Mike Teunissen and Preben Van Hecke to go on the attack.

With the Kristof group caught, Gatis Smukulis (Astana) decided to attack from within the peloton, immediately passing Teunissen and tracking down Van Hecker.

From there, the duo went on to open up a slight gap of 15 seconds during the final 60 kilometers.

With 35 kilometers to go, the leaders were now holding a one minute advantage over the peloton. However, a further 5 kilometers later, and their lead started to diminish quickly.

Entering into the final 20 kilometers, Smukulis and Van Hecker were still clinging to a 30 seconds lead. But, shortly thereafter, Van Hecke decided that it was time to sit up, leaving his breakaway companion to forge ahead alone.

With less than 17 kilometers remaining, Smukulis realized his chances of holding off the peloton were futile, and therefore decided to rejoin the peloton.

From there, Katusha took over control, with Nils Politt and Dmitriy Kozontchuk leading the charge. However, BMC and Dimension Data soon found their way into position as well, with Jay Thomson taking control at the front for the South African team, while Katusha drifted slightly backwards.

However, with 10km to go, BMC and Bora-Argon 18 were attempting to organize their respective lead-out trains as well, with Michael Schär and Christoph Pfingstqn breifly setting the pace for a few kilometers. But, Dimension Data once again moved up to the front, followed by a huge surge from Tyler Farrar, while BMC and Bora-Argon 18 tried to respond.

Once more however, Katusha took control during the final 6 kilometers, only to see Astana moved up next to them.

With 4km to go, things got even more animated, as Fortuneo-Vital Concept briefly hit the front. But, a defiant Dimension Data, as well as Bora-Argon 18, had their stints at the front as well.

With Katusha and Dimension Data back in the mix, several of their respective riders hit the front. But, chaos would soon plague the peloton in the form of a major crash, that claimed several riders such as Sam Bennett (Bora-Argon 18), Andrea Guardini (Astana), Yauheni Hutarovich (Fortuneo-Vital Concept), Zico Waeytens, Søren Kragh Andersen (Giant-Alpecin), Brenton Jones and Graeme Brown (Drapac).

Meanwhile, Boasson Hagen sprinted past the Katusha riders, but Guarneri reacted quickly enough to keep his teammate, Kristof, on his wheel. Cavendish was also quick to react to his rivals moves. And, for a brief moment, it looked like Cavendish might seize another victory, but Kristoff had enough of an impetus to hold off the Manxman in what unfolded into a photo finish.