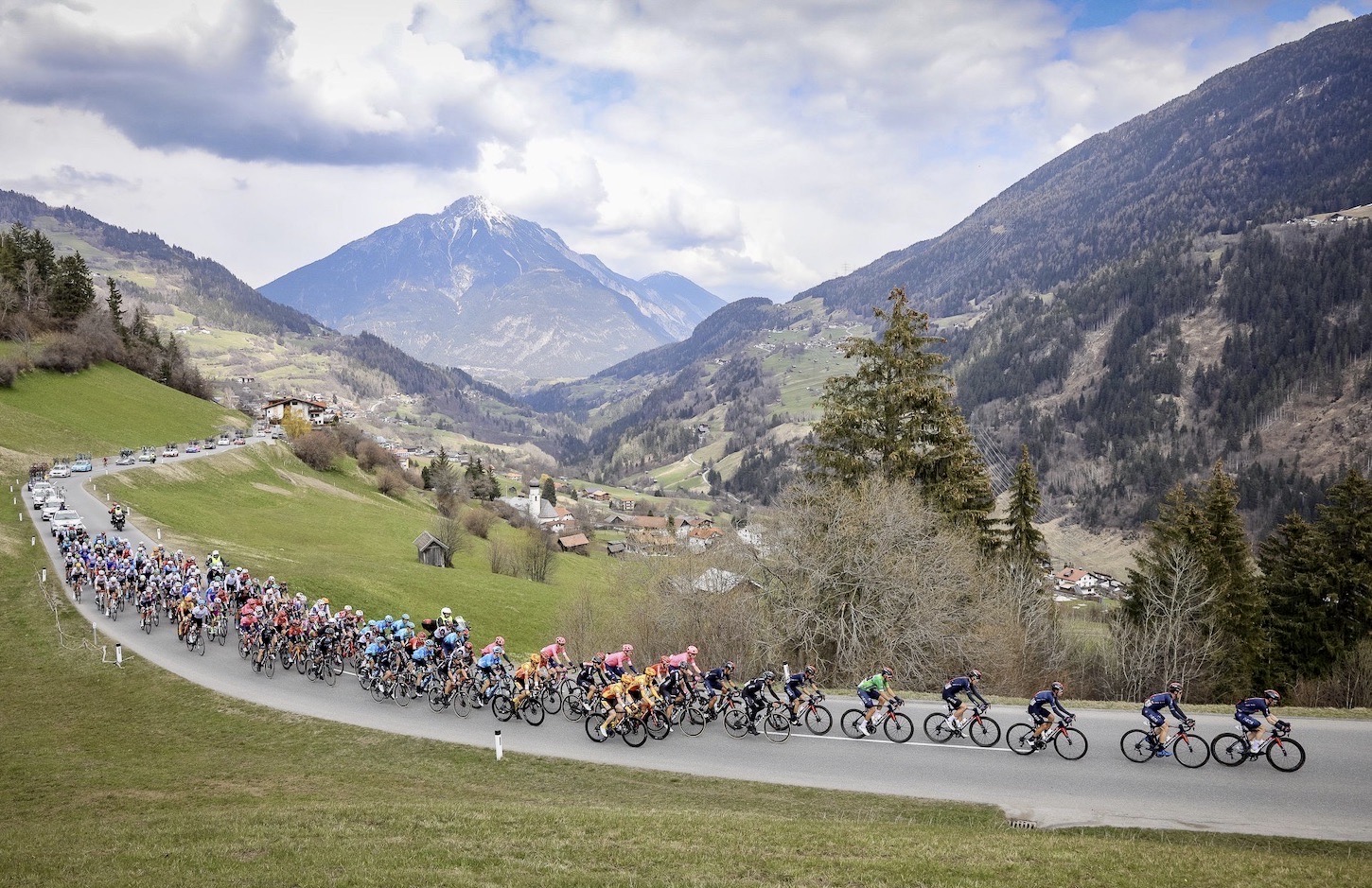 Simon Yates (Team BikeExchange) won stage 2 of the Tour of the Alps today, winning a short but mountainous stage after following a series attacks from the likes Pavel Sivakov (Ineos Grenadiers), Nairo Quintana (Arkéa-Samsic) and Hugh Carthy (EF Education-Nippo), before setting off on his own along the final climb of the Piller Sattel.

Yates quickly opened up a 30-second gap during the final two kilometers of the climb, while Sivakov tried to limit his losses, finishing 41 seconds down on Yates, with Dan Martin (Israel Start-Up Nation) beating out Aleksandr Vlasov (Astana-Premier Tech) to claim the final spot on the podium.

From there, the escapees went on to establish an advantage of three minutes over the peloton.

Van Rensburg was the first rider to fall back along the climb of the Gachenblinck-Piller Sattel with 55 kilometers to go, while Thompson took the maximum points on the climb and forged ahead with Bais over the top with a gap of 2:30.

With 35 kilometers to go, Thompson and Bais were still clinging to a 22 second lead, but later stretched their margin back out to over two minutes again. They later hit the second ascent of the Kaunergrat side of the Piller Sattel with 30 seconds ahead of the rest of the break and two minutes to the peloton with 29 kilometers remaining.

A surge from Yates later saw the peloton splinter dramatically, with just Sivakov, Carthy and Quintana able to follow with 24 kilometers left. But,  the TeamBikeExchange rider putting in another big attack with only Sivakov able to follow.

Yates went over the top of the climb with a gap of 20 seconds, while Pello Bilbao (Bahrain Victorious) and Romain Bardet (DSM) made it to the chasing trio at the bottom of the descent. Bardet attacked straight away but was brought back as the group swelled to 15 riders with 9 kilometers to go.

Alejandro Osorio (Caja-Rural) and Martinez went clear from that group before being joined by Hindley, Cepeda and Ruben Guerreiro (EF-Nippo) with 8km to go. Aleksandr Vlasov (Astana-Premier Tech), Sivakov and Dan Martin (Israel Start-Up Nation) joined them but they just continued attacking each other.

It finally snapped allowing Sivakov, Vlasov, Hindley, Martin and Cepeda to get away as they started working hard to catch Yates who was 44 seconds further up the road.

Sivakov attacked the chase group and went clear with Cepeda before dropping the young Ecuadorian rider and going clear during the final 4 kilometers. Sivakov held on for second with Martin and Vlasov catching and beating Cepeda to the line.

Yates now leads the overall race with a 45 second advantage over Sivakov going into stage three, a hilly route from Imst to Naturno that’s just over 162 kilometers.