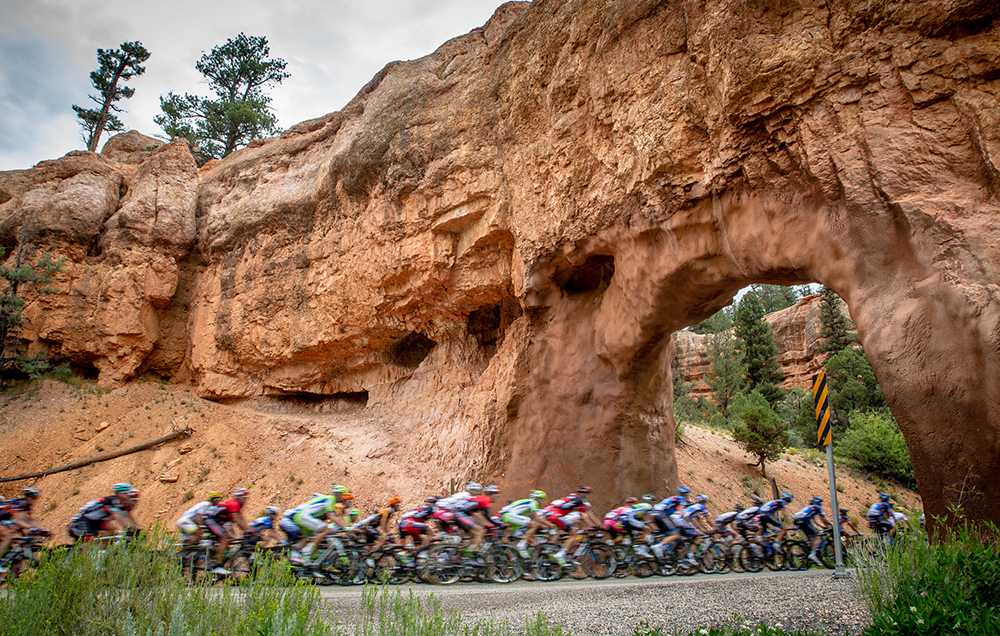 The preliminary rosters have been confirmed for the 16 men’s teams competing at the weeklong 2016 Larry H. Miller Tour of Utah, Aug. 1-7. A total of 122 athletes from 26 countries are expected to line up and contest “America’s Toughest Stage Race”. Starting Monday, Aug.1, at Zion Canyon Village and finishing on Sunday, Aug. 7, in Park City, the UCI 2.HC-sanctioned stage race boasts an all-star field of national champions and Grand Tour stage winners.

“I’m looking forward to coming back to the Tour of Utah and hopefully successfully defending my title. It’s a beautiful state and a beautiful race, and I have fond memories there,” Dombrowski said about racing in Utah.

From the preliminary rosters provided by teams, there are 24 athletes who were born on or after Jan.1, 1994, qualifying them at Under-23 for Subaru Best Young Rider classification points. USPRO champion Daniel of Axeon Hagens Berman is one to watch.

“It is a huge honor to represent the U.S. national champion’s jersey in such a big American race. I hope to ride with integrity and try to represent my U.S. national title as well,” said Daniel, who won the Utah Office of Tourism KOM classification at last year’s Tour of Utah. “Winning a stage would be amazing. I won the king of the mountain jersey last year and I don’t know if I can do it again. But to come back and get a good result, either as a stage win or to hold the jersey for a day, would be very special. I am in no rush to change my national championship jersey, either.”

The Larry H. Miller Tour of Utah continues to be free for all spectators, making professional cycling one of the most unique professional sports in the world today. Fans can follow the race live each day with mobile applications from Tour Tracker powered by Adobe®, as well as live coverage each day on FOX Sports2 (ROOT Sports in Utah viewing areas). Prior to the race start, the teams will be introduced Saturday, July 30 at the Team Presentation presented by America First Credit Union. This event is free for spectators at the Aston Family Greenshow stage on the campus of Southern Utah University in Cedar City from 5-6:30 p.m.

“We have an impressive field of international riders for this year’s Tour of Utah. The competition will be incredible, the scenery is always magnificent, and our host communities roll out the red carpet for everyone. From the athletes and teams to the spectators and volunteers, we are excited for a 12th season of racing and a great week,” said Jenn Andrs, executive director of the Tour of Utah.

Joe Dombrowski will be supported by four Americans on his Can nondale-Drapac Pro Cycling team, including Nathan Brown and Andrew Talansky, who have Grand Tour experience; 2010 U.S. National Road Race Champion Ben King; and Phil Gaimon, who finished 11th at this year’s 2.HC Criterium International.

Joining Eisenhart of the BMC Racing Team is Colombian climber Darwin Atapuma, who was ninth overall at this year’s Giro d’Italia and claimed a stage at the Tour de Suisse. Another American on the team is Joey Rosskopf, who was the Utah Office of Tourism King of the Mountain winner in Utah in 2014.

Making its inaugural appearance at the Tour of Utah is the Swiss-based IAM Cycling team, featuring Australian Heinrich Haussler. He has competed at all three Grand Tours and won a stage at the 2009 Tour de France. Supporting him in Utah will be American Larry Warbasse, who raced the 2016 Giro d’Italia, and reigning Swiss National Time Trial Champion Jonathan Fumeaux.

Trek-Segafredo brings Julian David Arredondo, who won a stage and the KOM classification at the 2014 Giro d’Italia, as well as Americans Peter Stetina and Kiel Reijnen. Stetina completed the 2016 Tour de France in 46th overall, the second highest American at the event. Reijnen won Stage 1 at the 2015 Tour of Utah.

Closely tied to its roots in Brittany, the Fortuneo-Vital Concept team (named Bretagne-Seche previously) earned a wildcard invitation to the Tour de France for the third year in a row. The all-French roster will feature the reigning Under-23 World Champion Kevin Ledanois, who claimed his rainbow stripes in Richmond in 2015. His teammates will include the eight-time French national cyclocross champion Francis Mourey and Jean-Marc Bideau, who returned to racing this year after suffering a double fracture of the pelvis in October 2015.

Other Pro Continental teams racing in Utah are Nippo-Vini Fantini, ONE Pro Cycling, Team Novo Nordisk and UnitedHealthcare Pro Cycling Team. The Nippo-Vini Fantini team will be led by Damiano Cunego of Italy. A veteran with more than 15 Grand Tours in his career, he won the 2004 Giro d’Italia. Cunego finished second in the KOM classification in this year’s Giro.

ONE Pro Cycling, based in Great Britain, will bring a pair of 23-year-old New Zealanders, Dion Smith and James Oram, both previously racing at the Tour of Utah with other teams. Smith finished third in the points classification and fourth in KOM points at last year’s Tour of Utah riding for Hincapie Racing Team.

Team Novo Nordisk continues as the first professional cycling team comprised of all riders living with diabetes. Irishman Stephen Clancy, named Cycling Ireland’s ‘Domestic Rider of the Year,’ earned his best career finish at a UCI 2.1 race when he sprinted to fourth place on Stage 3 of the Tour of China last year.

The UnitedHealthcare Pro Cycling Team has participated in every edition of the Tour of Utah since 2006. American Matthew Busche won the 2015 U.S. Professional Road Race national championship. He is joined by Tanner Putt, a Utah native and a two-time (2013-14) U.S. National U23 Road Race champion, and Italian Marco Canola, who was third overall at the 2016 Philadelphia International Cycling Classic.

Team rosters from Continental teams include strong talent who have excelled at the Tour of Utah in past years and also left their mark on the season so far. The Axeon Hagens Berman squad is comprised of riders who are all 22 years of age or younger. Guerreiro of Portugal is the oldest at 22 years of age. Another American to watch in addition to Daniel and Costa is Logan Owen, who won Stage 3 at the 2015 Tour of Utah.

Jelly Belly presented by MAXXIS returns to Utah for the seventh year with Australian Lachlan Morton, who finished 10th overall at 2015 Tour of Utah. He made a name for himself at the 2013 Tour of Utah by winning Stage 3 in Payson with a screaming descent of Mt. Nebo and capturing the overall Subaru Best Young Rider jersey at week’s end. The Aussie won the 2016 Silver City Tour of the Gila and finished second on G.C. at the 2016 Cascade Cycling Classic.

Rally Cycling will bring Americans Eric Young and Tom Zirbel to Utah. Young has sprinted to two stage wins at the Tour of Utah, in 2014 and 2015. Zirbel is the silver medalist from this year’s U.S. National Pro Time Trial championship.

Team Jamis returns to Utah with Colombian climber Janier Acevedo, who finished third overall at the 2013 Tour of Utah. After racing for two years on a WorldTour team, Acevedo returns to Team Jamis this season. He will be joined by 2014 U.S. National Pro Road Race Champion Eric Marcotte and Grant Tour rider Lucas Sebastian Haedo of Argentina.

Lupus Racing Team and Silber Pro Cycling make their first appearances in Utah. Lupus Racing Team is led by Americans Chris Horner and Chad Beyer. A 22-year veteran of the professional peloton, Horner has competed in 10 Grand Tour events and was the 2013 champion of Vuelta a España. The oldest rider in the peloton at 44 years of age, Horner has finished second overall twice at Tour of Utah, in 2013 and 2014. Beyer is a former WorldTeam rider with BMC Racing Team. He finished fourth overall at this year’s USA Cycling Professional Road Race National Championship.

The Larry H. Miller Tour of Utah continues to be free to all spectators. It is the first internationally-sanctioned cycling competition in North America following the Tour de France. More information about the Tour of Utah, the host venues and the teams can be found by visiting www.tourofutah.com, as well as social channels Facebook (tourofutah), Twitter (@tourofutah, #TOU16), Instagram (thetourofutah), and YouTube (tourofutah).