Turn Your Ford Into a Bicycle 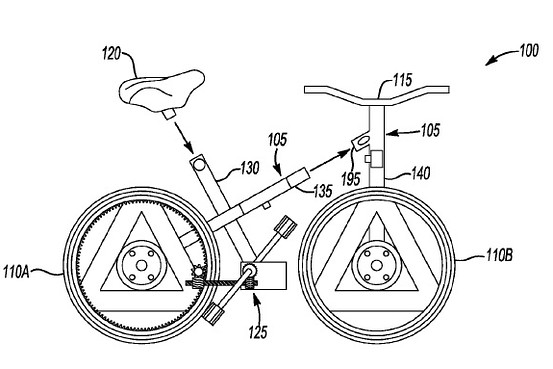 Despite the tensions that may sometimes exist between motorists and cyclists, there’s no denying the benefits a bicycle has to offer in terms of mobility in and around an urban setting. Particularly, in heavy traffic situations.

Ford Motor Company seems to be working on a project, which may not only give its owners a way out of traffic jams, but may also bridge the gap between cars and bikes.

If Ford is successful in getting its patent application off the ground, owners will be able to retrieve a compact frame from their trunk, and along with some other parts of the vehicle – assemble a fully functional bike.

Ford sees this as a way of getting motorists out of a traffic bottle-neck, or limited parking situation, than it does a means of recreational cycling.

“A collapsible frame may allow the rider to conveniently store the bicycle in an ultimate destination such as an office,” Ford says.

“The rear wheel and the front wheel may be fixed to one another for use in a spare wheel in a vehicle or separated for use in the bicycle.

“Moreover, the frame may be collapsible so that it may be easily stored in the vehicle when the bicycle is not in use.”

Back in 2013, the compact bicycle maker, Dahon, announced plans to partner with Ford on the design of a stowable, compact bike.

It will be interesting to see if their partnership includes such a design as this one.