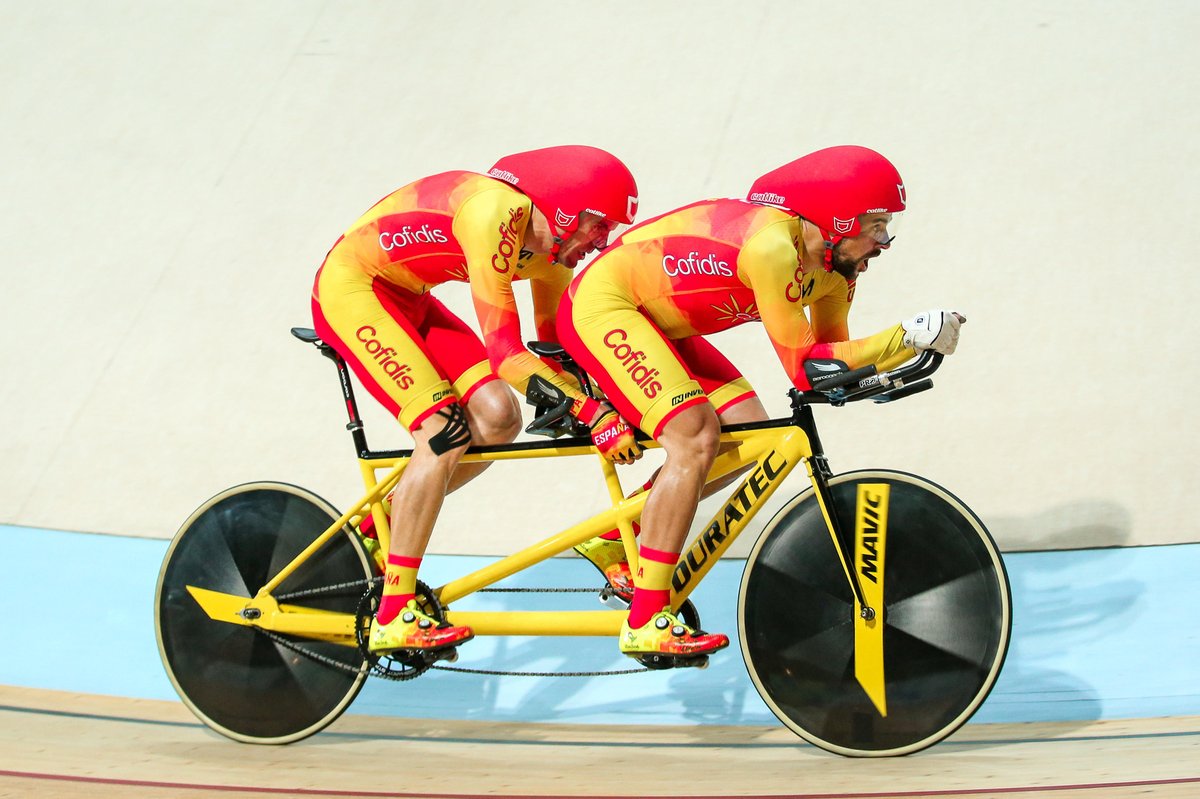 The first day of the UCI 2019 Para-Cycling Track World Championships in Apeldoorn, the Netherlands, was marked by two new world records in the individual pursuit, test events for the tandem team sprint and the Omnium. Australia celebrated three individual pursuit world titles.

The racing began with the first athletes taking to the track for the qualifying round of the Women’s C2 – 3km individual pursuit: Christelle Ribault from France and the Colombian Leidy Yolani Ramirez, with the latter progressing to the next round. The WC2 individual pursuit qualifying rounds established the medal races set-up for the evening: the gold final would pit Sini Zeng of China against another Colombian, Daniela Munevar, while the bronze medal final would see China’s Zhenling Song vs Sarah Ellington of New Zealand. Zeng’s fastest time was 4:13.780, with an average speed of 42.557km/h.

The morning program continued with a bang. In the Women C3 individual pursuit qualifying, the Australian Paige Greco established a new world record over 3km of 4:00.20, an average speed of 44.961km/h. The gold medal final was set for Greco vs Denise Schindler of Germany, while China’s Xiaomei Wang and Anna Beck of Sweden would go head to head for the final place on the podium. One of the race favorites, Megan Giglia (GBR), was out of the medal battle, having recorded only the 6th fastest time.

In the Men C1 individual pursuit qualifying rounds, another of the favorites, the C1 UCI Hour Record holder Michael Teuber – the German who set the record in November 2018 on this very same velodrome – also failed to reach the final. Another legend of the sport, Ricardo Ten from Spain, posted not only the best time of the morning but also set a new world record for 3km with 3:50.05 at the blistering average speed of 46.946km/h. In the gold final, Ten would face Zhangyu Li of China, while the bronze final would see Ross Wilson (Canada) vs Pierre Senska (Germany).

In the last individual category for the 3km Men individual pursuit, C3, the best time went to Australian David Nicholas with 3:30.775, at an average speed of 51.239km/h. In the UCI World Championships final he would face the Spaniard Eduardo Santas. The bronze ride-off would pair Finlay Graham (Great Britain) against Diederick Schelfhout (Belgium).

The day’s first battle for gold was the Women’s C5 500m time trial, with a great result for local hero, the Dutchwoman Caroline Groot, recording a time of 36.464 (49.364km/h), only 0.46s off the world record of Ju Fang Zhou, which the Chinese rider set in Rio in 2016. The silver medal went to enrich the already vast collection of Dame Sarah Storey of Great Britain, one of the most successful female Paralympians in history, while third was Marie Patouillet of France.

Great Britain took its revenge in the Women’s C4 500m time trial with Kadeena Cox, the world record holder winning in 36.176 at the average speed of 49.757km/h. She was joined on the podium by China’s Jianping Ruan and New Zealand’s Katherine Horan.

Some of the athletes in these two races were also competing for the Omnium test event, with the 500m time trial being the first race counting towards the final classification. In Women’s C5, Caroline Groot is leading, while in Women’s C4, Russia’s Elena Galkina is in command. Both athletes have scored 40 points.

In the Men’s C5 1km time trial, world record-holder and race favourite, Spain’s Alfonso Cabello, won gold in style with the time of 1:04.414 at the average speed of 55.888km/h. Second place went to Blaine Hunt (Great Britain), while third was Christopher Murphy (USA).

Britain’s Jody Cundy, world record holder and defending champion, confirmed his dominance in the Men’s C4 1km time trial, winning gold in a time of 1:05.422 at the average speed of 55.027km/h, ahead of Slovakian Jozef Metelka and American Justin Widhalm.

Jody Cundy said, “wearing the rainbow jersey again is an amazing feeling, it’s what you are trying to do in this competition. To pick up eleven kilometer titles now, it’s pretty special. I would have liked to go faster but four weeks ago I didn’t know I would have even been able to race today, so being able to do it at this level and winning by nearly a second is pretty special.”

The day closed with the finals of the individual pursuits. In the Women’s C2 final Sini Zeng of China, confirmed her best time in the qualifying rounds by beating the Colombian Daniela Munevar for gold. The bronze medal final went to New Zealand’s Sarah Ellington.

In the Men’s C1 individual pursuit, Ricardo Ten from Spain was victorious over Zhangyu Li of China. Canada’s Ross Wilson claimed the bronze medal. The Spaniard commented, “incredible, I can’t believe it! Another world title, for the second consecutive year. Wearing again the rainbow jersey is fantastic, I’m even happier than last year!”

The final race of the Day 1 program of the 2019 UCI Para-Cycling Track World Championships saw another gold medal go to Australia, as David Nicholas beat the Spaniard Eduardo Santas with a time of 3:29.879, to take the Men’s C3 individual pursuit world title. Diederick Schelfhout of Belgium was the victor in the bronze medal final.