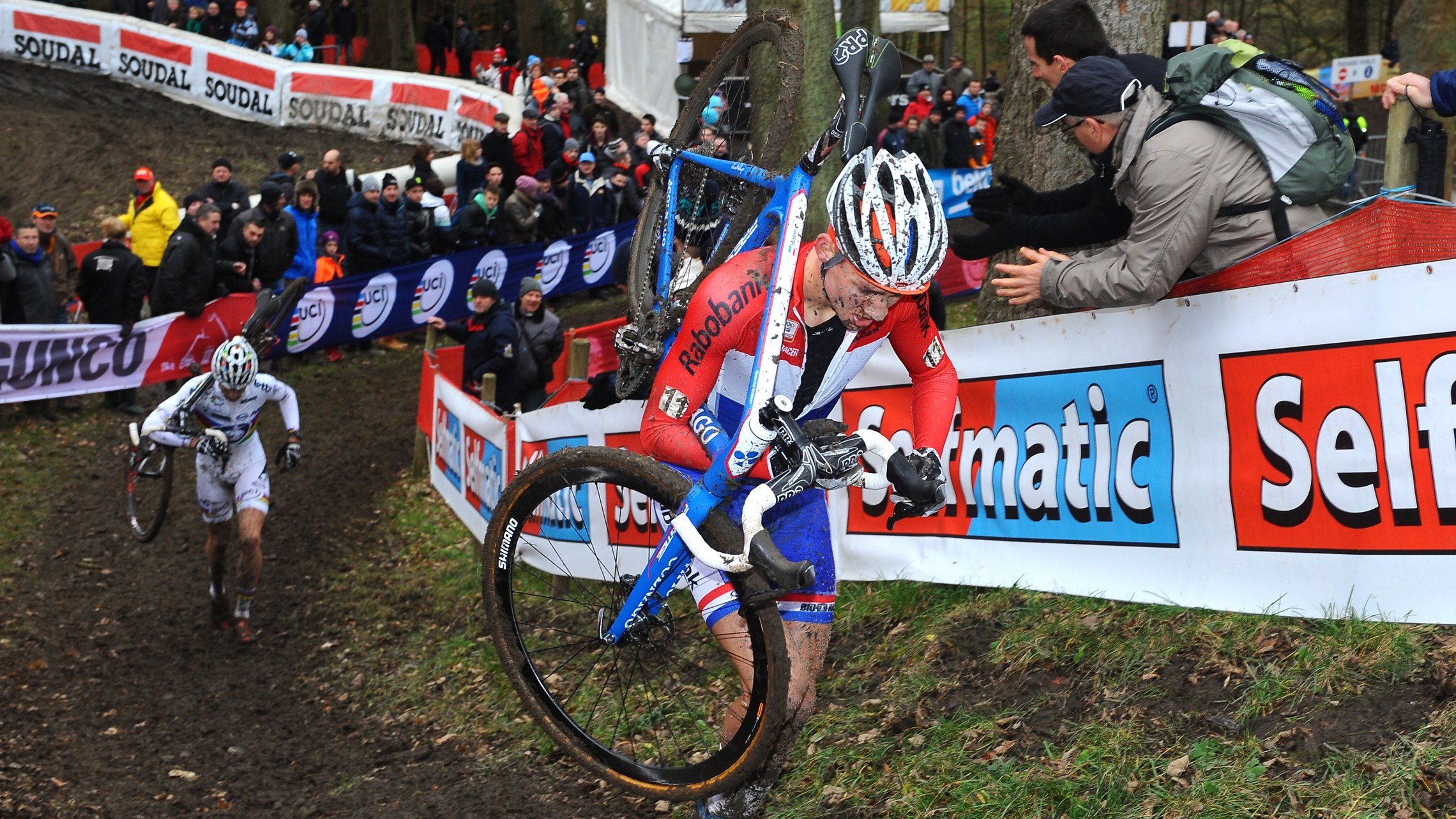 20 Dec 2015
By Gianni Pericolo - In LATEST ARTICLES, THE GREAT RACE

“I just followed the lead of Wout and I felt good but I didn’t think I had the legs to win. But on the last lap, I felt I was growing,” Van der Poel said. “That final sprint, well those are the duels you’re training for.”

Sven Nys (Crelan-AA Drink) was the fastest starter in today’s race, quickly leading the field led up the steep start, with Corne Van Kessel (Telenet-Fidea) glued to his wheel, while Van Aert and van der Poel remained within striking distance.

However, it wasn’t long before Nys and Van Aert were off the front, while Van Kessel and Tom Meeusen (Telenet) chased in earnest.

From there, Nys and a handful of riders followed, as Aerts proceeded to ride up a steep section, while others were forced to run.

At the second passage of the finish line, Aerts had an advantage over of 5 seconds over a small chase group that included Van Aert, Nys, Meeusen, Venturini, van der Poel, Vanthourenhout, van der Haar and Pauwels. Meanwhile, his teammate van Kessel abandoned the race.

All along, Van Aert and Nys had been doing most of the work in the chase group, albeit at a conservative pace. However, Venturini decided to take over the reigns, as they started into the third lap – slowly reeling in Aerts.

Meanwhile, Michael Boros made the junction from behind, while Meeusen was dropped and Vanthourenhout was taken out of contention by a stroke of bad luck.

Boros then made his way to the front to take over the pace-setting, while Nys suddenly appeared to be suffering at the back.

Van der Haar then took over with only Boros, Van Aert and van der Poel able to follow his pace.

However, Pauwels, Aerts and Venturini succeeded in making their way back, as they crossed the finish line, only to be joined by Nys and Klaas Vantornout as well.

At that time, van der Haar decided to attack at the start of the next lap, subsequently creating a slight gap. But, bad luck quickly befell the leader, as he hit the ground during a tight turn. And, despite a fast remount, he was soon rejoined by the chase.

Van der Poel then took over at the front, until Van Aert decided that it was time to test his rivals. As soon as the overall World Cup leader hit the front, he created a gap that appeared to be a fast-track to another victory.

However, van der Poel had other plans for himself, after losing out on yesterday’s victory, nor did Pauwels have any interest in giving up either, as they both took off in pursuit of Van Aert.

Van Aert continued to set the pace as they tackled the next lap, but he was unable to shake off his rivals. Meanwhile, back in the chase group, Vantornout and Nys took turns on the front of the chase group, but to no avail.

From there, it briefly looked like the world champion was poised for victory, but Van Aert and Pauwels soon made their way back to the leader.

Pauwels was allowed to briefly set the pace during the first part of the final lap, until van der Poel took over.

The world champion then initiated a fierce attack, but was unable to shake Van Aert off. Instead, the young Belgian rider countered, quickly putting van der Poel in trouble.

However, Van Aert then sat down, while van der Poel still had enough reserves to initiate a final move.

Indeed, van der Poel proceeded to pass the fading Van Aert and seize the victory by a mere second on the line.

Harris won the fourth round of the series, after finishing 10 seconds ahead of Caroline Mani (Raleigh-Clement) and more than a half-minute over Eva Lechner (Colnago), who moved into the World Cup lead ahead of Sanne Cant (Enertherm-BKCP).

Today’s victory was more than just a win for Harris, it celebrated her first-ever World Cup victory.

“I can hardly believe that I won,” said Harris. “This is my first win of the season and I’m incredibly happy. I immediately felt that it was right. It was a tough race and I counted the laps, but I felt that I could keep going. That I am now third is quite a nice bonus in the standings.”

Meanwhile, Katie Compton (Trek Factory Racing) was the top American rider, finishing in fourth pace, at 39 seconds, while the unstoppable Sanne.Cant experienced an off-day – finishing as far back as 14th.

“I don’t know what was wrong, but I really could not follow,” she said. “Everything hurt today.”

Harris led from midway through the first lap and despite being pressed hard in the closing lap by second- placed Caroline Mani of France, the 2013 national champion did not let the result she has chased for so long slip through her fingers.

Italian champion Eva Lechner led from the start line but it wasn’t long before Harris took over and began to lay the foundations of a superlative performance.

With three laps to go, Harris had built a lead of 20 seconds and was totally committed to her task, handling the technically-challenging Namur citadel course with aplomb.

At the bell lap Harris still led but Caroline Mani of France was chasing hard, trying to deny Harris her maiden win. But the pressure didn’t faze the 29-year-old from Derbyshire, crossing the line overjoyed to taste the world cup victory she has worked towards for her entire cyclo-cross career.

“I can’t quite believe it myself. I’ve literally dreamed of winning a world cup for so long,” said Harris.

“I’ve wanted to win a race the whole season and I’ve kept trying and kept trying and today I just took the lead and I just felt good. I could just keep going on my own lines.

“It was so hard,” Harris continued. “Every lap I was just counting it down and it was like, one more lap, one more lap and I just knew if I could keep pushing and keep my own pace then I could take the win.

Fellow British rider and yesterday’s runner up in the Bpost Bank Trofee Scheldecross in Antwerp, Helen Wyman, had a problem on one of Namur’s numerous drop-offs on lap one, tangling in the barriers and losing precious seconds. A subsequent bike change left the British champion with a lot of work to do.

Wyman eventually recovered to finish in eighth, one minute and 37 seconds back, a great comeback but disappointing for Wyman, who had won the Spa Francorchamps Superprestige event a week earlier.

Harris’ win moved her from fifth to third in the world cup rankings despite missing the opening round in Las Vegas.