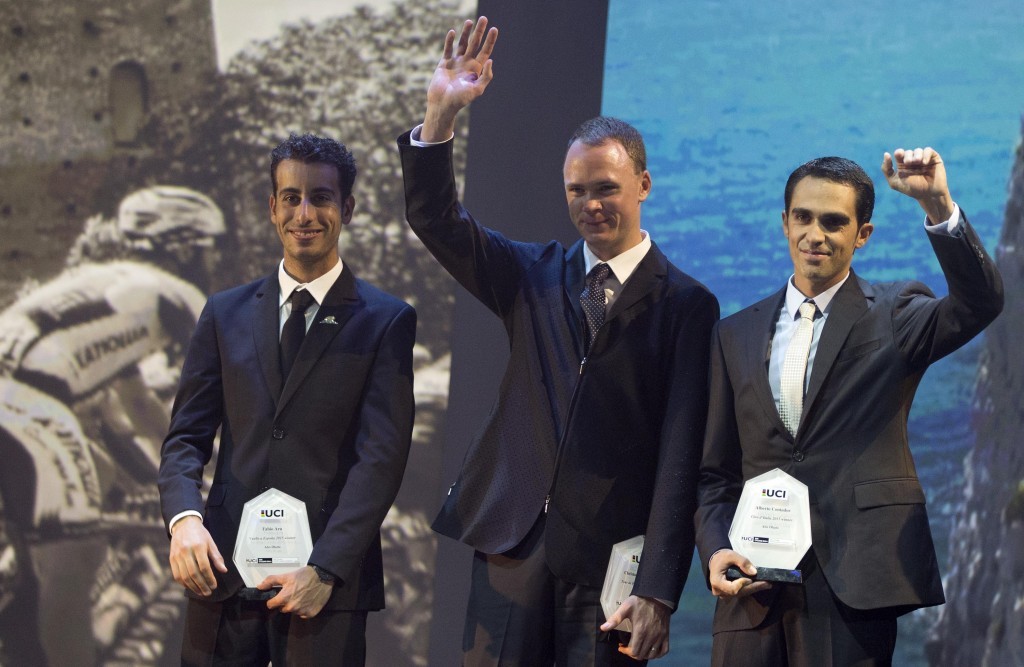 12 Oct 2015
By Campionissimo - In LATEST ARTICLES, THE GREAT RACE

The season’s most successful road cyclists received awards at the first-ever UCI Cycling Gala last evening, which coincided with the final day of  the inaugural Abu Dhabi Tour in the United Arab Emirates capital.

In addition to the award recipients and the teams that competed in the Abu Dhabi Tour, the gala was attended by several UCI Management Committee members, representatives of National Federations and international media, and was broadcasted live on Abu Dhabi Media, host broadcaster of the Abu Dhabi Tour.

“Our inaugural UCI Cycling Gala enabled us to pay tribute to the athletes who made the headlines and graced the podiums in 2015,” said UCI President Brian Cookson. “It was a wonderful opportunity to gather together some of the biggest stars of cycling for a true celebration of our sport. The fact that we could organise this event to coincide with the highly successful Abu Dhabi Tour made the occasion all the more special.”

“I’m very proud of this first edition of the Abu Dhabi Tour. It was a great challenge to organise, but I am convinced that we proved ourselves up to the task. My compliments go to its first champion, Esteban Chaves. Esteban, you rode a courageous race and climbed magnificently on the Jabel Hafeet stage. I am deeply honoured to host the UCI Cycling Gala: most of the main protagonists of the 2015 season are here, bringing star quality to professional cycling’s debut in UAE Capital Territory”, declared Mr Aref Hamad Al Awani, General Secretary of Abu Dhabi Sports Council.