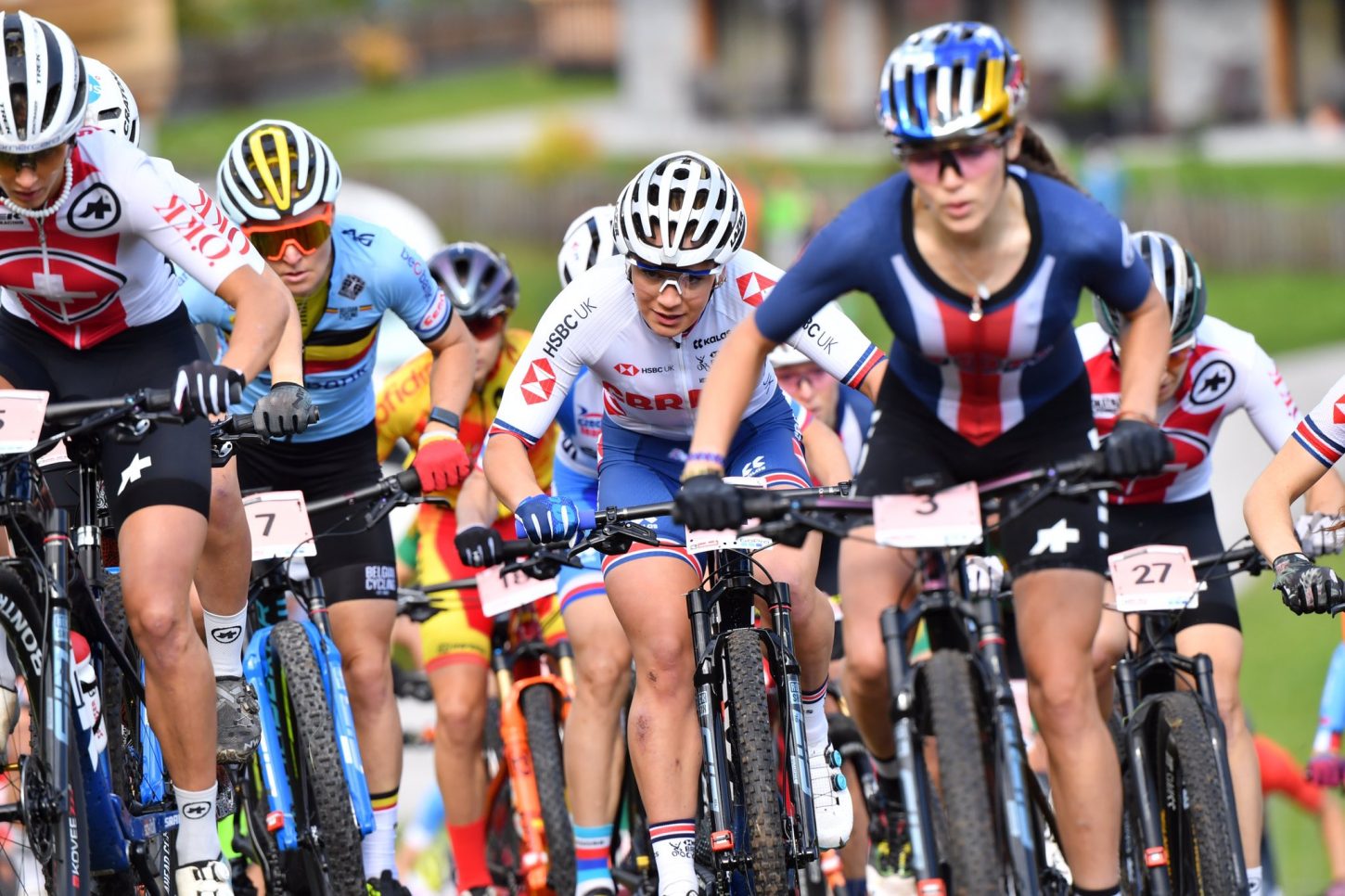 The only rainbow jersey up for grabs on day three of the 2020 UCI Mountain Bike World Championships presented by Mercedes-Benz in Leogang, Austria, went to Thomas Pidcock (GBR) who comprehensively beat Christopher Blevins (USA) and Joel Roth (SUI).

Two days after winning the UCI E-mountain bike World Champion title Great Britain’s Thomas Pidcock hit the track again in Leogang on a slightly shorter course, with a little less mud and 250 fewer Watts assistance, but with the same hunger to win, whatever the discipline and regardless of the conditions. He went in search of his second rainbow jersey of the week, only days after he won both Elite cross-country short track World Cup races at this first attempt in the Nové Město na Moravě (Czech Republic) UCI World Cup double-header, and just two weeks after being drafted into the British squad for the UCI Road World Championships at Imola (Italy).

Blevins, Pidcock and Roth pulled away at the end of the second start loop, with the Briton assuming the lead on lap 1. As Roth faded, 20-year-old Simone Avondetto (ITA), Canada’s Sean Fincham, Martin Vidaurre Kossman (CHI) and Germany’s David List joined him to form a – distant – chasing pack.

The 21-year-old British rider pulled away, building a 40-second gap on the second of four 3.4km laps, and extending it beyond a minute by half distance.

Fincham, a regular top-10 finisher in the Mercedes-Benz UCI World Cup, including a podium at last year’s Les Gets, vied for third place with Roth and Avondetto. And with the trio around 3 minutes behind Pidcock and the field stringing out, it was looking like a battle for bronze…

And it was Roth who upgraded his 13th in the U23s at Mont-Sainte-Anne, Canada, in 2019. For third at Leogang, Austria in 2020. Blevins put in a strong, if somewhat lonely ride for second, but, like the rest of the pack, simply came up against an unstoppable force, finishing 1’52’ adrift of Pidcock.

Before the U23 cross-country Olympic race, Leogang’s more famous track, ‘the Speedster’ played host to the downhillers. With just a few big names missing – including GBR’s five-time UCI Elite Women World Champion Rachel Atherton –  it was a high quality field for the first top-level action of 2020 in Sunday’s finals.

Germany Junior National Champion Thiele went first and set a fast time, but it was the French Junior Champion who went quickest of all by 3.5sec.

Home nation favourite and YouTube star Gabriel Wibmer was first down the shute – but it was a truly international fastest top 10, including a dominant ride from the American winner of Crankworx Innsbruck.

Running halfway through the order, UCI World Champion Myriam Nicole set the provisional no 1, 26-sec faster than the first 12 riders, before Höll smashed it on the Speedster.

Canada’s Finn Iles set a fast time before the French-heavy top 10 hit the track and lifelong friends and rivals Vergier and Bruni took over.

On Saturday, the battle was intense for rainbow jerseys on day four of the 2020 UCI Mountain Bike World Championships.  In all three races it was a French rider who prevailed: after Loana Lecomte claimed the U23 Women title, Pauline Ferrand-Prévot retained her golden crown and Jordan Sarrou completed the hat-trick.

Under-23 Women’s cross-country Olympic: Lecomte in a class of her own

It was a cloudy start as the U23 Women got underway for the day’s first race, but after 1:13.34 the sunshine couldn’t have been brighter for Loana Lecomte who showed her dominance over the competition, many of whom were a year older than her.

With the race distance set for one start loop and four full 3.4km laps, 39 riders representing 25 countries took to the challenging mud of the Leogang cross-country track.

But the 21-year old French rider, who had stepped up to win the Elite Women XCO race at Nové Město na Moravě, beating Pauline Ferrand-Prévot, was in control. Lecomte maintained an advantage of more than 1 minute to Hungary’s Vas until the end, as the pair traded fastest laps. The Netherlands’ Alvarado finished third, Batten fourth, with 19-year-old Swiss multi-disciplinary rider Noëlle Buri in a noteworthy 5th position, another rider to watch along with Vas.

The Leogang XCO course’s five laps presented lots of climbing and descents, technical throughout with muddy switchbacks, roots and drop-offs. Under the weak autumn sun, the multi-disciplinary champion was one of many riders who chose hardtail bikes.

Ferrand-Prévot led from the line, aiming to push out a gap just as she did at the final Women Elite XCO race at Nové Město na Moravě.

At the end of lap 1 (5.75km), the defending UCI World Champion had a minute advantage over McConnell – who was looking to improve on her 2019 UCI Worlds bronze medal – with a clear gap to the chasers. Some cyclo-cross riders, including 2015 UCI Cyclo-cross World Champion Ferrand-Prévot put their skills to good use on the most treacherous sections, and after a crash for Courtney and a stuck seatpost for Belomoina, the leader slipped but immediately remounted.

At half distance the French star led by 1.14” from the Australian, with 2014 UCI Cyclo-cross World Championships silver medalist Lechner and former U23 UCI World Champion Frei – the highest placed full-suspension rider – together at 2’ back.

As Ferrand-Prévot’s gap extended at the front, the long-standing battle for third place became a fight for second. Lechner caught McConnell on the final lap, the two swapped the lead back and forth and the Italian came round the Australian to win the sprint by a split second.

“I feel great … it was an amazing race,” said Ferrand-Prévot. “It’s a good day also for France with the title for Loana in the Under 23s.”

As the expected rain held off for the start of the 6-lap race, defending UCI World Champion Nino Schurter (SUI), Henrique Avancini (BRA) and many other favorites chose full-suspension bikes while the lighter riders wished to capitalize on the course’s climbing demands.

As the field began to string out Mexico’s Jose Ulloa Aravelo and Avancini – winners of Nové Město na Moravě’s two cross-country short track races – were near the front.

Vader and Sarrou pulled away before Avancini tried to bring the chasing group back to them.

Into lap 2, Avancini, Mathias Flückiger – silver medalist in 2019 behind his compatriot Schurter – Carod, Koretzky and Italy’s Luca Braidot (2nd at the 2018 XC Euros) were grouped at +40sec behind Sarrou and Vader. Young Dane Simon Andreassen was a minute back in ninth, with Schurter a further three places and 12 seconds down. The eight-time UCI World Champion eventually pulled back to ninth, but it was just not his day.

The 27-year-old Frenchman developed his lead before Vader slid twice on lap 3, slipped back into the chasers’ grasp and was dropped, as was Koretzky. Sarrou, who had started the week on a high by winning his fourth Team Relay gold, was intent on claiming his first solo rainbow stripes, maintaining an advantage of over 1 minute.

But who would claim silver and bronze? With Avancini falling back into the clutches of Ondrej Cink (CZE), Flückiger and Carod had pulled clear from Braidot and a resurgent Maxime Marotte (FRA) to decide the other podium places. It was 2010 U23 UCI World Champion Flückiger who took the silver while Carod improved on his fourth last year at Mont-Sainte-Anne with bronze.