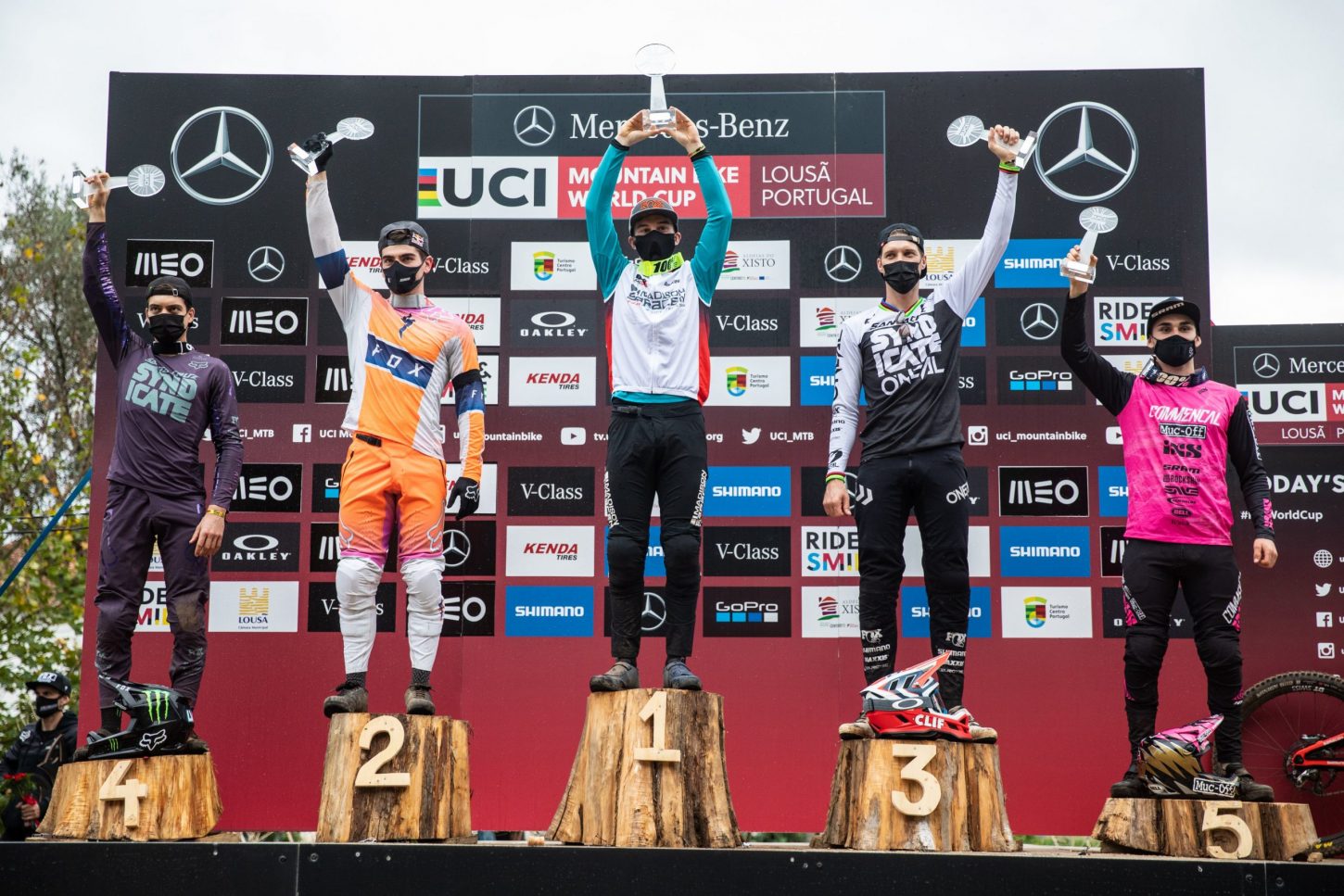 “I wanted it so bad. I’m so happy to finish with a bang. It wasn’t perfect but I gave it everything I had on the flat and that made the difference,” said Sunday’s winner Loïc Bruni

“I came into the race and I already surpassed my expectations for the year. The run was tricky, the conditions were sketchy… To get the news I’ve won the overall is incredible,” declared Matt Walker.

Held either side of the UCI Mountain Bike World Championships in Leogang (AUT) the 2020 UCI Mountain Bike World Cup was a relentless quickfire format of two double-headers – Maribor (SLO) and Lousã (POR). In a compacted mountain bike season that has seen breakthrough performances by young riders upsetting the establishment, and fightbacks from the experienced riders, it was drama all the way, not just in Elite Men and Women classifications, but also starting with the Juniors.

In the Junior Women competition, French rider Leona Pierrini (third in the UCI World Championships) won the first three races, while her compatriot – and UCI World Champion – Lauryne Chappaz claimed the last victory in Portugal. Even without the 10 points earned for fourth in the final race, it meant that Pierrini would be overall champion (190 points), with the consistent Belgian Siel Van der Velden second on 105. With her Lousã efforts, Chappaz netted 100 points and third overall.

In the Junior Men, the four races saw two wins for young Irish UCI World Champion Oisin O’Callaghan, and one apiece for Ethan Craik (GBR) and the USA’s Dante Silva. As O’Callaghan crashed out to 24th and 20th in Lousa, the 30 points Craik took for third meant he won the overall with 131 points from O’Callaghan (120) and Portugal’s Nuno Reis (110).

Marine Cabirou started the 2020 UCI Mountain Bike World Cup the way she finished 2019, winning: the first race at Maribor was her fourth in a row. The second race went to Nina Hoffman (GER) and the third to 2017 UCI World Cup overall winner and 2019 UCI World Champion Myriam Nicole (FRA). That was before Cabirou returned to the top step in Portugal to make it six wins in eight World Cup races.

But Nicole had also been scoring well throughout the campaign, making the last race the decider for the overall. Going into the last race, Nicole had 625 points with Cabirou on 575. In third, 2019 UCI World Cup overall winner Tracey Hannah (AUS) was looking to bow out in style with her 45th podium.

Having crashed in qualifying, Nicole ran early and finished in 4.28.344, matching Tahnée Seagrave’s qualifying mark and putting herself in position for the win and the overall. Nina Hoffman – the German winner of the second race in Slovenia – came straight out and smashed another 3 sec off the time to go into the lead. UCI World Champion Camille Balanche (SUI) couldn’t get in the podium mix, while Hannah was on quick pace but crashed spectacularly in her final UCI World Cup race. She nevertheless made it safely to the line.

Cabirou came out of the gate and put the hammer down relentlessly, building a 3-sec advantage over Hoffman by the midway point. Despite small mistakes, the younger French woman made it to the hot seat with 1.7sec from the young German, and crucially, putting Nicole in third.

Only fastest qualifier Seagrave (GBR) was left to run. Her pace at the top of the course looked like it might upset Cabirou’s perfect day but the Briton faded to third, leaving the race win and season to the delighted 23-year-old French woman who finished with 825 points, Nicole on 775 and Hoffmann powering to third overall on 664.

Men Elite: Walker by a whisker

Like the Women Elite competition, the Men Elite has seen a dominant performance by a French rider, Loris Vergier winning the first two races. As he punctured early in Lousã race 1, Greg Minnaar (RSA) took the win to put himself amongst the riders going into the final race with a shot at the overall, a month before his 39th birthday.

But consistency meant that the Briton Matt Walker started the race on the highest points – 517 compared to Vergier’s 503. Tied with Minnaar on 427 points was the 2019 overall winner Loïc Bruni, the fastest qualifier for the final race with something to prove and all to win. A four-way fight…

”I have the leadership, but I feel like I’ve got nothing to lose,” said 21-year-old Walker, pre-run. While Vergier might have been deflecting: “Greg has always been the best as managing pressure… that’s how you define a really good champion.”

Showing similar form to the first Lousã race, where he finished 10th, Jamie Edmondson narrowly bettered fellow Brit Phil Atwill to become the early hot seat occupant (3:56.332) in his first year stepping up to the Elites, as distant clouds threatened. As light rain began, Thibaut Daprela (FRA) – who started the day fifth overall on 408 points – slotted into third with 3:56.967.

As conditions changed the midfield couldn’t match their times. Into the last 10 to run, Vergier hit some errors in the slippery turns near the top, and recorded a time of 4:00.012 (14th), the new target for the overall chasers.

With four to go, Tory Brosnan (AUS) was at his best to hit third, pushing Daprela to fourth, just one point ahead of Vergier. Walker hit the track knowing that finishing 14th would see off Vergier’s overall challenge – and started to light up sectors green, taking the hot seat with two riders to go. But not for long!

Minnaar followed suit, lighting up fast sectors, stretching an advantage over Walker, finishing 1.24s quicker than the Briton. Would the GOAT stretch his incredible 22 wins to 23? That was up to Bruni – and the Frenchman proved his point, in amazing style, quickest by 0.17sec to take the race win he was desperate for.

Bruni won the day but Walker took the overall… without reaching the podium top step this World Cup season.  Walker finished with 687 points, Bruni on 677 and Minnaar with 627.