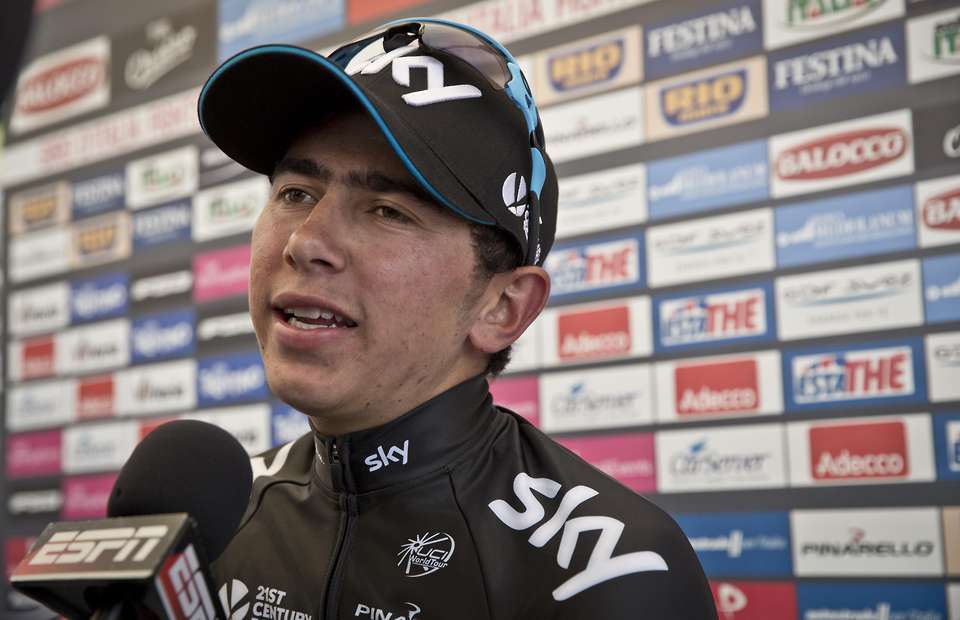 Team Sky has provisionally suspended Sergio Henao from racing for the second time in two years, after the UCI’s Cycling Anti Doping Foundation launched the first formal stage of an investigation into his biological passport today.

Henao was sidelined by the team from March 2014 to July 2014, without formal procedures being opened, after out-of-competition testing flagged up possible irregularities in his blood levels, but he was cleared by Sky to return later that season.

Henao received a letter two days ago from the CADF requesting that he explain findings in his biological passport between August 2011 and June 2015. He has 20 days in which to prepare a response.

“It is part of a formal process and we are not trying to underplay the formal nature of it,” said a Team Sky spokesman. “We are seeking clarification from him.”

It is likely that evidence from an internal inquiry set up by Sky in spring 2014 to examine his physiology as a rider living and training at high altitude will form part of his response.

The rider issued a statement through the team, saying: “I am beyond disappointed. I have worked incredibly hard to get back to racing fitness after shattering my knee last year – but I know who I am, how hard I have worked and the sacrifices I have made to be where I am today. I am calm and confident that this will be resolved soon so I can get back to racing as soon as possible.”

The team added that it is not clear from the letter precisely which readings in Henao’s biological passport have come into question.

“They have not mentioned that in the letter,” said the spokesman. “It is kept broad – they don’t identify specific readings. It’s about establishing a pattern. When we put him back into competition we were happy that his biological passport can be explained by his status as an altitude native. That status won’t have changed.”

Henao was first withdrawn from competition in March 2014 following tests the previous autumn that were flagged up by Team Sky’s compliance panel, which monitors the riders’ data from tests by bodies outside the team such as WADA.

Team Sky alerted the CADF at the time, and followed this up with a four-month investigation by a team from the University of Sheffield, with the aim of clarifying whether his findings could be linked to the fact that he lives at altitude, as do other Colombian professional cyclists. Henao’s home at Rionegro near Medellin is at 7000 feet above sea level.

“Sergio was raised in the mountains, goes back in winter and lives and trains at different levels,” said Team Sky’s head, Sir Dave Brailsford at the time.

Team Sky explained today: “The readings which prompted us to undertake our investigation were down to his physiology. We believe that research explained those readings – it’s just who Sergio is, what his physiology is, and how it is replicated in his blood passport.”

Therefore,  the Team Sky did not seem surprised that the CADF had flagged him again.

“The physiology of ‘altitude natives’ is a complex area,” said Brailsford in a statement released via the Team Sky website. “The science is limited and in recent years we have proactively sought to understand it better by undertaking detailed scientific research. We recognise why the CADF have raised this issue as it is one we have obviously raised ourselves.”

The UCI said in a statement: “As per the applicable regulations, when the independent experts in charge of reviewing biological passport profiles require further information from the athlete, this stage is confidential. However, given that this is already in the public domain, the UCI and CADF confirm that Sergio Henao has been asked to provide explanations for his ABP values.

“As per WADA’s ABP process, once provided, his explanations will be sent back to the same experts for review and assessment. In the meantime, the UCI and CADF cannot comment further.”

In March 2014, Team Sky took the tough decision to withdraw Sergio Henao from racing for a period of three months.
As we announced at the time, this was as a result of the team’s own internal monitoring of Athlete Biological Passports and in response to Sergio’s initial out-of-competition control tests at altitude in Colombia. These tests were introduced that winter by the anti-doping authorities.

Sergio was born in Colombia and raised in the mountains. He goes back to Colombia during the winter and lives and trains at different altitude levels. The team’s understanding of the effects of such prolonged periods at altitude after returning from sea level has been limited by a lack of scientific research into ‘altitude natives’ such as Sergio.

At the time, Team Sky made this issue public and drew it to the attention of the relevant authorities – the UCI and Cycling Anti-Doping Foundation (CADF) – and asked them for assistance. To aid our understanding of Sergio’s readings, we then commissioned a 10-week research programme led by Dr Eddie Hampton, a consultant haematologist from the University of Sheffield, with other independent scientific experts. This programme involved further randomised blood and urine tests at sea level and altitude, undertaken through WADA accredited laboratories.

After completing their research, the experts had the highest level of confidence that the readings which prompted us to undertake further testing were the athlete’s normal response to altitude. As a result, Sergio returned to racing with Team Sky in June 2014.

Sergio has this week been contacted by the CADF with a request for more information with regards to readings on his Athlete Blood Passport between August 2011 to June 2015. These include the same readings which prompted us to undertake further research in 2014. Given the team had drawn the attention of anti-doping authorities to the issue at the time, this does not come as a surprise.

Sergio has not failed a drug test and the CADF process is conducted confidentially. However, given that we have raised this issue in the past, we feel it is important to set out our latest position.

We continue to support Sergio and remain confident in the independent scientific research which was undertaken. We will be helping Sergio make his case robustly over the coming period. He will also withdraw from racing until the issue is resolved given this contact from the CADF and the very obvious distraction to him. There is no obligation on us to do this but it is team policy if and when a formal process such as this begins.

We do have to recognize the CADF process going forward so we hope people understand why we will be unable to give further commentary on it over the coming weeks. It is our hope that this can be looked at and resolved quickly by all the relevant authorities so Sergio can start racing again soon.

“The physiology of ‘altitude natives’ is a complex area. The science is limited and in recent years we have proactively sought to understand it better by undertaking detailed scientific research – both for Sergio and for the benefit of clean sport more widely. We recognise why the CADF have raised this issue as it is one we have obviously raised ourselves. Thus far Sergio’s data has been anonymous to the CADF experts. We hope and believe they will reach the same conclusions when they consider the background and all the evidence over the coming weeks.

“We believe in Sergio. He has just come back to full fitness after spending eight months recovering from a potentially career ending crash. But we respect the CADF process and will apply our team policy in the circumstances.

“We will continue to support him fully during this period so he can get back to racing as soon as possible.”

“I am beyond disappointed. I have worked incredibly hard to get back to racing fitness after shattering my knee last year – but I know who I am, how hard I have worked and the sacrifices I have made to be where I am today.

“I am calm and confident that this will be resolved soon so I can get back to racing as soon as possible.”