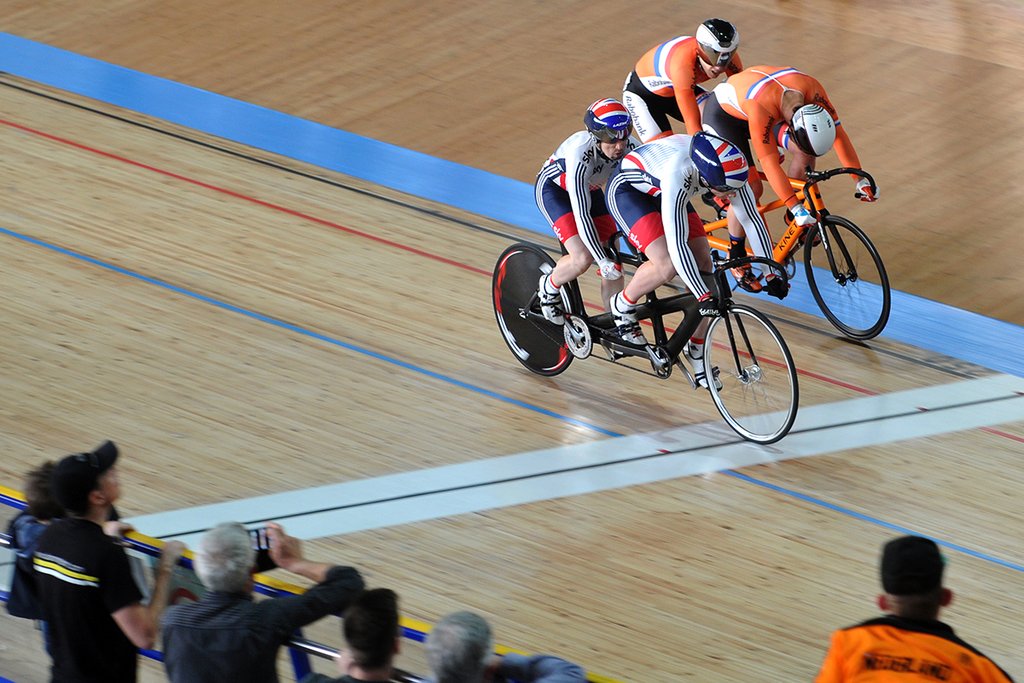 After defending his kilometre world title on Saturday and successfully rewriting the record books, Neil Fachie did it all again on Sunday, the last day of the UCI Para-cycling Track World Championships in Montichiari (Italy). The British rider and his pilot Peter Mitchell were the big winners in the men’s sprint final.

In the scrap for the gold medal, the duo from Great Britain beat Tristan Bangma and Teun Mulder of the Netherlands. “It was a really tough final. We knew that our opponents would be hard to beat,” explained Fachie.

The British tandem pair won gold in two straight rides, but the title was not secured easily. “We came out strong in the first ride. Then the Dutch were very fast in the second ride and we thought they were going to beat us. We just managed to edge ahead right at the end,” commented the Scottish para-cyclist.

Setting the fastest time in the qualification, Fachie and Mitchell, who are also world record holders at the distance, defeated an Australian pairing in the quarter final. They then faced their compatriots James Ball and Craig MacLean in the semi final. After losing the semi, Ball and MacLean secured bronze by defeating a Spanish duo to join their British teammates on the podium.

Neil Fachie and Peter Mitchell will undoubtedly be the tandem to beat on the Rio track at the Paralympic Games in September. “We’ve got great form, but I know what it’s like to lose. Our opponents will doubtless be working very hard to go faster. So we have to carry on training, seek improvement and hope to remain top of the pile in Rio. It will be difficult, but I can’t wait!”

Gold and a record for Australia’s Gallagher and Janssen

The bronze medal went to the Netherlands’ Larissa Klaassen and Haliegh Dolman (pilot).

Gallagher and Janssen broke the world record in qualification with a time of 11.045 seconds, beating the previous best of 11.112 seconds established by their compatriots Brandie O’Connor and Breanna Hargrave at the World Championships in Aguascalientes in April 2014.

The British added another title to their collection on Sunday, winning the class C team sprint. They defeated the Chinese in the final while rewriting the record books with a new world best of 49.230 seconds.

The bronze medal went to Spain who beat the United States in the ride-off for third place.

“It was a phenomenal Championships for us. We have a very strong team. Some of my teammates have been developing in recent years but now suddenly they are podium contenders. We just have to keep this momentum going until the Paralympic Games in Rio!” concluded Fachie.