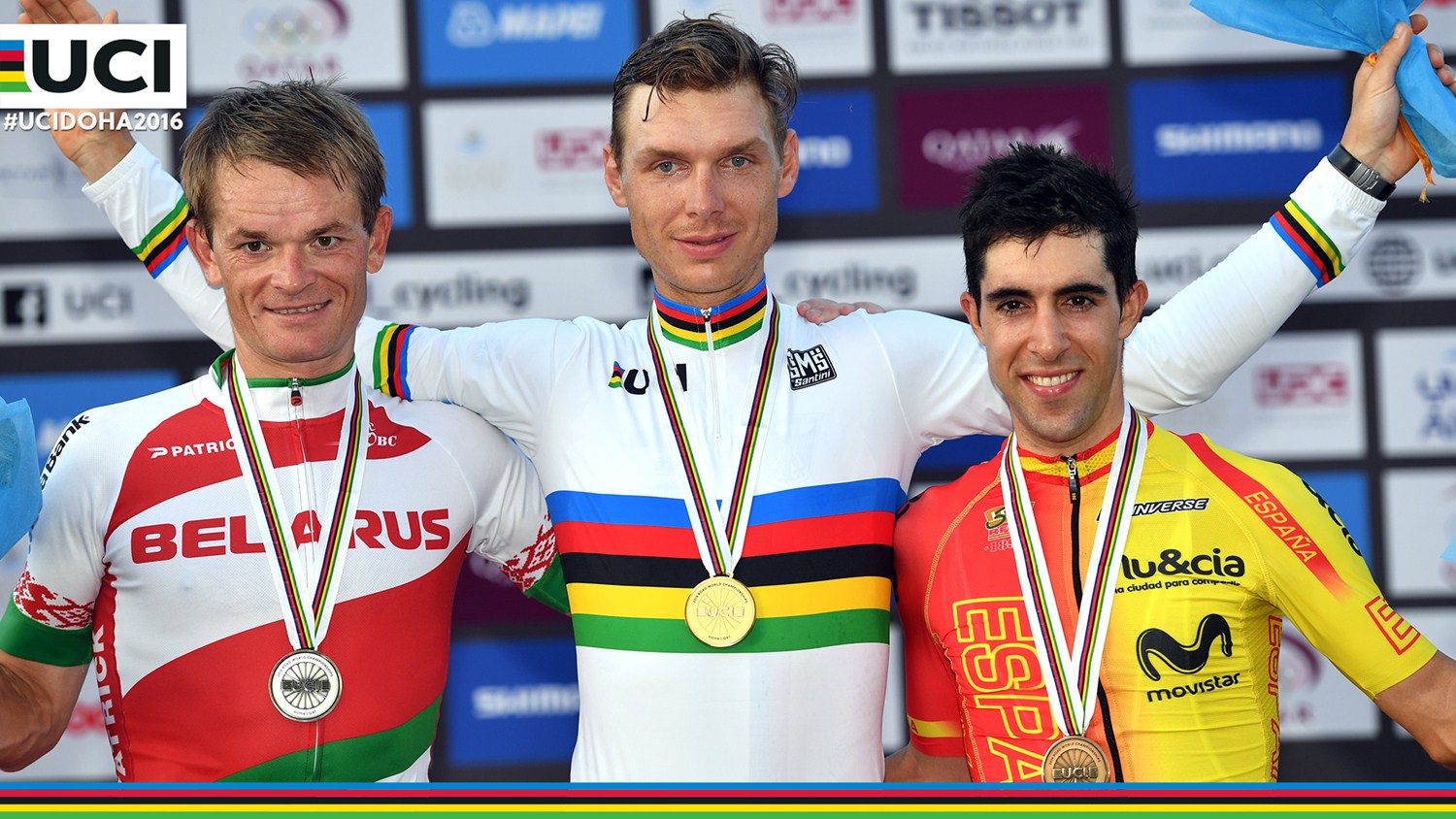 Germany’s Tony Martin soared to his fourth UCI Road World Championships Elite time trial gold, pulverizing the opposition on the Qatar course with a faultless performance against the clock.

For Martin, taking his fourth Elite Men’s time trial gold after his run of three straight victories from 2011 to 2013 in the category was broken two years, represents by far his biggest individual triumph of this year. It has been an unusually difficult season for the 31-year-old German, with only one individual victory – in the Tour of Britain’s time trial – before forming part of the Etixx-Quick Step line-up which triumphed in the World’s team time trial title last Sunday.

Then on Wednesday, Martin was back in the top spot again, clinching gold on Doha’s flat course ahead of defending UCI World Champion in the discipline, Vasil Kiryenka, by a massive 45 seconds. Bronze went to Spain’s Jonathan Castroviejo, 1:10.91 slower than Martin and narrowly ahead of fourth-placed Maciej Bodnar (Poland) at 1:16.77.

“Everyone knows I hadn’t had a good year so far until Sunday [TTT world title], so becoming World Champion is incredible – it makes everything that happened this year forgotten.”

“The course was really made for me. The only thing I was scared of was the heat but I had good preparation at home, then coming here and getting a lot of knowledge about what I had to do. I was also strong in the head, I was not the favorite  I had no pressure, I just had fun on the road.”

“I always said I don’t count the victories. I look forward from year to year, and I want to be World Champion every year. I’m so proud I am able to wear the World Champion’s suit next year – I’ve missed it a lot.”

In terms of Elite time trial medals, Martin’s victory puts him on a record-equalling footing with another time trialling legend, Fabian Cancellara, who also scooped four golds in the Elite Men’s category at the UCI Road World Championships between 2006 and 2010. But Martin’s seventh visit to the World’s time trial podium makes him the rider with the most medals ever in that category – four golds, a silver and two bronze, which is one more than Cancellara, who has four golds and two bronze.

Almost as soon as Tony Martin, the fourth last rider to roll down the start ramp on Wednesday, began his time trial with faultless cornering on the technical opening segment around the Lusail sports center, it was clear that he would be very tough to beat.

Ireland’s Ryan Mullen, the twelfth man to start on Wednesday, had set an excellent early best time for the course of 46:04, that allowed him to remain in the ‘hot seat’ of the rider with the provisional best time overall for nearly two hours.

However, as Martin destroyed all the previous best intermediate times and Kiryenka, the last man to start, began to slip further and further behind the German, it was clear that Mullen’s hold on the ‘hot seat’ was steadily slipping in Martin’s favor.

Three seconds faster than Kiryenka at the first split, the gap between the 2015 World Champion and his German predecessor then yawned to 21 seconds at the second split. As Martin came out of the long, straight segment across the Qatari desert and bore down on the finishing circuits on The Pearl island, first Bodnar and then Castroviejo dislodged Mullan, finally fifth overall, from the provisional top spot on the leader board. But it was impossible for them – or anybody else – to match Martin.

Clocking an average speed of over 53.6kmh, the German crossed the line well over a minute ahead of Castroviejo, who was then pushed down into bronze by Kiryenka. Even so, for the Spaniard, narrowly beaten by Chris Froome in the Olympic time trial for bronze, taking his first senior UCI World Championships medal – and Spain’s first in the 2016 competition across the board – constituted a major satisfaction.

“This is a real prize for me,” Castroviejo said, “it was very hard in the last part with the heat and I think that was where I could make a difference. I didn’t feel particularly good in the build up to the time trial, but recently I’ve been getting some good results, regardless of if the terrain is harder or more straightforward and that gives me a lot of confidence for the future.”

In the UCI World Championships Best Nations Classification, with half the medals now awarded, Germany has bounced back into the overall lead with 667 points, 87 points ahead of the USA. The Netherlands are now in third, with 402 points.