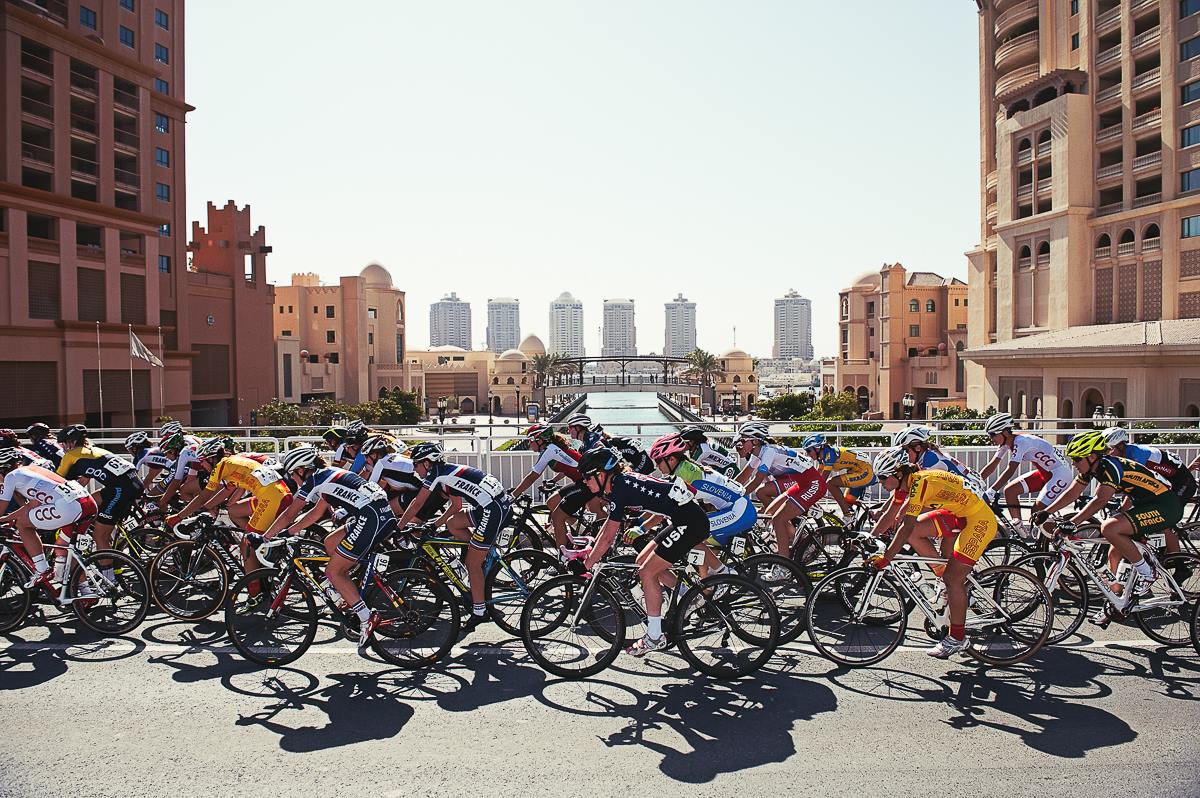 Italy’s Elisa Balsamo scored a commanding victory when she crossed the line well ahead of Skylar Schneider (USA) and Susanne Anderson (Norway) in a fast and furious mass dash for the line,to claim the UCI junior women’s World Championship road race in Qatar today.

“I’ve got to thank all my teammates, this world title is thanks to all their work, this win is ours, not only mine,” she said after the Italian riders sung the national anthem together with pride. “The whole Italian team deserves this success and lets hope they other riders can do well tomorrow and the day after tomorrow.”

Schneider, who had been a favorite going into the race, edged out Andersen for the silver medal.

“It was a very unique course. The technical aspect was a very big advantage for us,” Schneider explained at the finish. “There were some very strong teams out there who were able to string it out and it was cool to look ahead and see the first rider all the way out there and look behind and see all the way back. In the finish, the Italians did a really great job of stringing it out, their lead-out was very impressive. They were able to deliver their rider first and I was happy to come in second. I gave it everything.”

“I’m very happy with a silver medal. We came with a very strong team so we came with a lot of confidence. I tried to stay under the radar a little bit and tested my legs a bit in the time trial and really analysed the course. I think that played to my advantage today, especially in the last few kilometres. I’m really happy to win a medal for USA and silver is a nice color.”

The 74.5 kilometer race, consisting of five laps of the 15.2 kilometer circuit, began with a large crash, shattering the 80-strong peloton, which subsequently regrouped. However, the ferociously high pace not only ensured no breaks could then go clear, but also that riders were getting steadily dropped from the back end of the bunch.

First Germany and the USA, then Italy took command of proceedings at the head of the pack, which stretched even further apart under the increase in speed. The Italians made good of their commanding position to dominate in the final dash for the line, to the point that they placed two riders in the top five, Letizia Paternoster in fifth with Balsamo as the clear winner.

A runner-up in the European Championships this summer, Balsamo’s gold was Italy’s first top honor in the 2016 UCI World Championships after Lisa Morzenti’s silver in the Women’s Junior time trial and Jakub Mareczko’s bronze in the Men’s U-23 road race.