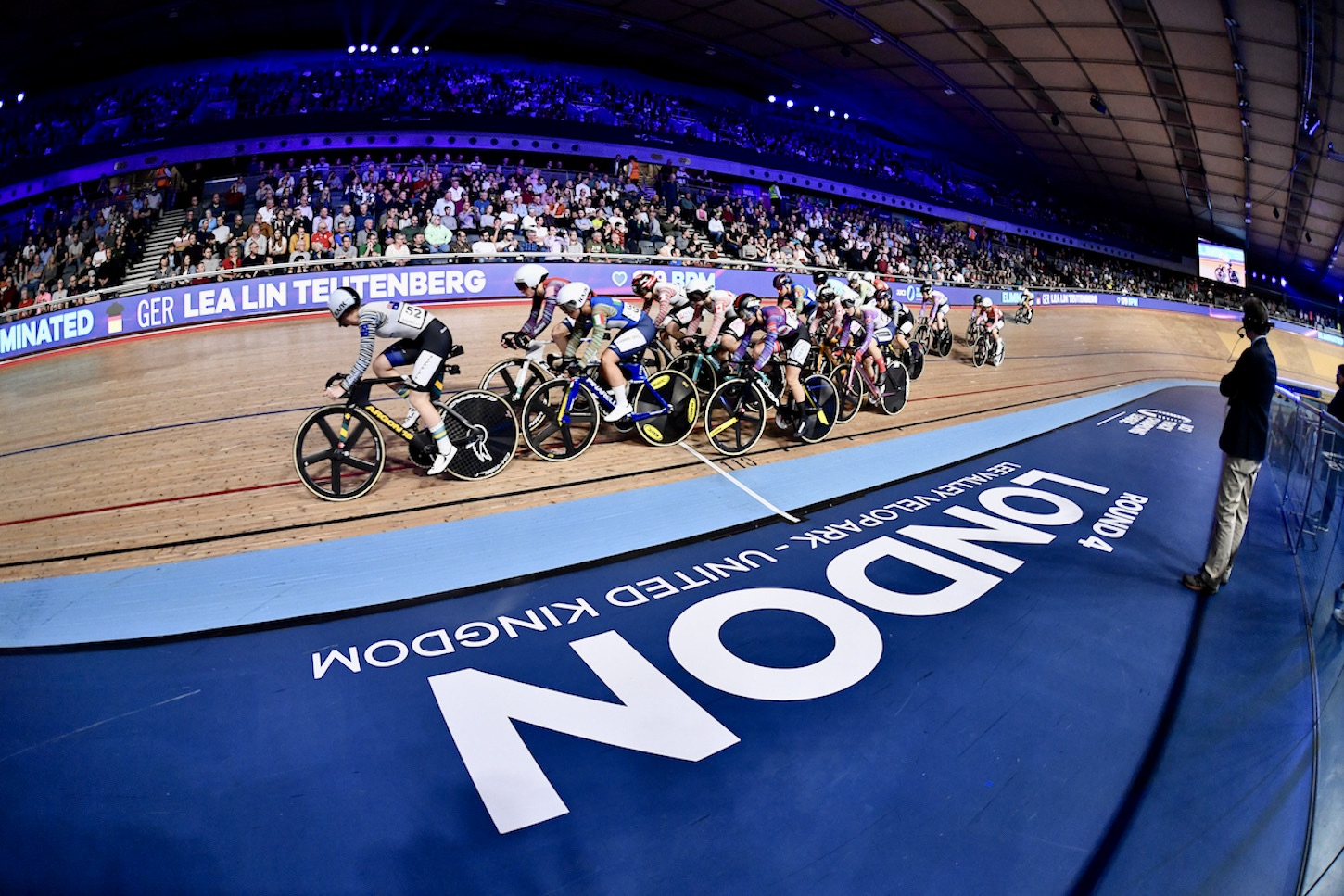 An enthralling penultimate round of the 2022 UCI Track Champions League in London saw Matthew Richardson (Australia) take the blue leader’s jersey off the shoulders of Harrie Lavreysen (Netherlands) for the first time in the history of the series.

Richardson won the Men’s Keirin in fine style with 2021 champion Lavreysen only managing fourth, but Lavreysen battled back brilliantly to win the Sprint final against his Australian rival.

Jennifer Valente (United States) meanwhile, claimed her first triumph of the 2022 campaign in the Elimination which meant she defended her lead in the Women’s Endurance league for a third round in a row. Earlier in the night, the American had finished fourth in the Scratch, which was won by Ireland’s Emily Kay.

The Men’s Endurance competition couldn’t be closer heading into Saturday’s grand finale, with Sebastián Mora (Spain) and Claudio Imhof (Switzerland) tied on points at the top of that table, even though William Perrett (Great Britain) won the Scratch and last season’s champion Gavin Hoover (United States) took maximum points in the Elimination. Mora will wear the jersey on Saturday courtesy of him achieving a better-placed finish than Imhof in the night’s Scratch.

Elsewhere in the Women’s Sprint league, Olena Starikova (Ukraine) secured a surprise victory over Mathilde Gros (France) in the Sprint final before Steffie van der Peet (Netherlands) edged out Kelsey Mitchell (Canada) to take her second Keirin success in as many weeks. Despite Gros finishing last in the Keirin final, she retained her lead at the top of the overall standings with one round to go.

Friday’s results set the scene perfectly for the final round of action which is also taking place at a sold out Lee Valley VeloPark on December 3.

STANDOUT DATA FROM ROUND 4

Taking place over just 20 laps, the UCI Track Champions League Scratch races have been some of the most intense of the season. On Friday, six female riders hit heart rates of over 200 beats per minute in that event, a clear indicator of how deep they had to dig. Canada’s Sarah Van Dam had the highest heart rate of the lot in Round 4, hitting 209 bpm.

Meanwhile, the first heat of the Men’s Sprint semi-finals brought together three heavyweights; Mikhail Yakovlev (Israel – 103kg), Jeffrey Hoogland (Netherlands – 100kg) and Harrie Lavreysen (Netherlands – 92kg). How much power does it take to see them hit over 70km/h? Roughly 2,000 watts. Yakovlev had the highest peak power of the trio with his 2,262 watts, but it was Lavreysen who took the win – clocking 1,992 watts and showing tactics are just as important as raw power when it comes to race craft.

Women’s Scratch winner Emily Kay (Ireland) said: “I can’t quite believe I won. I saw the opportunity and felt I had nothing to lose, so I just went for it. The series has not gone that well for me so far so I thought I’d give it a crack. It felt like the perfect time to go, so close to the finish when I think the other riders were thinking about the sprint, and I’m really happy with the result.

“This win is huge for me. I stepped away from the sport for a while and then came back and tried to find form. I crashed at the Olympics and it didn’t go well for me there, so since then I’ve been searching for a result that I can be proud of. We have the best riders in the world here and you can’t not be happy with that result.”

Women’s Sprint winner Olena Starikova said: “It was a very hard race, but I did it, I got my win! I was really happy with the sprint I was able to produce in the final, so that makes me happy. It’s an amazing feeling to get my first UCI Track Champions League win, but it’s certainly tired me out.”

Women’s Elimination winner Jennifer Valente said: “In the Elimination, there’s not actually that much strategy involved because you can’t get out. Even if you’re trying to recover, you can’t get your heart rate down, you still have to be pretty active in the bike race, and present in the moment. You can’t control what anyone else does and I think I rode pretty similar to how I have been riding previously.

Women’s Keirin winner Steffie van der Peet said: “I was at the front from the start and it was a nice situation to be in because I knew that everyone else needed to take over. Then Kelsey Mitchell came and that was nice for me because she’s one of the strongest riders. Like I hoped, she was keeping up the pace and that makes it difficult for everyone to go over, so that was perfect for me. Actually, in the last corner I realised I could win it, and that was very nice. I can’t really believe it. It was so cool last week to win but to do it two times in a row is crazy.”

Men’s Scratch winner William Perrett said: “It’s nice to get my first win of the series in front of a home crowd, and my family, and the race couldn’t have gone better. I knew going into it that I needed to take the lap because I’m more of an aerobic rider, I’m not a sprinter. There were some incredibly fast sprinters in there and if you take them to line, they will beat you. That’s how it works. But they don’t have the energy I have, or at least, most of them don’t. I was hanging close to the back at the start, not doing too much work, and when the moment came, I went. There is no point doing it half-heartedly otherwise you just lose energy.

“The German [Moritz Malcharek] went and I was behind the Swedish rider [Gustav Johansson] but he looked like he was hurting. I bridged over to the German rider and then we worked as a partnership. You either do what’s right and commit or you’re not going to get the lap. At the end, because I knew I was stronger than him, I just went.”

Men’s Keirin winner Matthew Richardson said: “That win was pretty simple in the end. Harrie [Lavreysen] was pretty cagey up front. I just waited until the move came from behind and then gave it a really good kick to get to the front, produced my final acceleration with a lap to go, and then managed to hold on.”

Men’s Elimination winner Gavin Hoover said: “My legs didn’t feel amazing during the race so I just tried to conserve my energy. This track is an easier one to stay at the bottom on and then sneak through, so I just tried to do that for as long as I could, and kept picking other riders off. It‘s amazing to get my first win of 2022. I’ve had such a difficult series this time around and this victory turns it all around for me.”

Men’s Sprint winner Harrie Lavreysen said: “I felt good, Matthew [Richardson] went first. I didn’t expect him to go into a track stand at the start but I thought ‘if he’s going to do it, I need to do it as well’. That made for a slow start and I wanted to make it a quicker heat. Matthew was really good tactically, which made it tough for me, but I just made it over the finish line ahead of him. I’m going to recover as much as possible now, lay in bed all day tomorrow, and then in the evening, just take it race by race. Matthew is still only two points ahead in the standings, so anything can happen.”

Francois Ribeiro, Head of Discovery Sports Events, said: “The Lee Valley VeloPark always provides the warmest of welcomes and tonight was no different. The crowd cheered the riders on from beginning to end and they were treated to some incredible racing. It will definitely be the same tomorrow night here in London as the 2022 season reaches a gripping conclusion, and there’s still everything to play for.”