Following an attack by Robbie Squire (Hincapie racing) during the final climb, the Australian rider came from behind just before the summit, and subsequently opened up a small gap for himself along the descent to seize the stage win.

Today’s victory not only netted Dennis the stage honors, but moved him up into the overall race lead as well.

Meanwhile, his teammate, Brent Bookwalter (BMC) sprinted for second, crossing the line just ahead of Robbie Squire, who rounded out the podium in third spot.

“I just kept [Robbie Squire] about 10-20 meters,” said Dennis, “and then slowly, I could see he was dying, all the guys were dropping off my wheel, and I thought, ‘Well, now’s the time.’ I just accelerated in the saddle and used my track speed. It was pretty special for me”

“All in the family, man. It’s all good,” Bookwalter said after the 125.8-mile stage. “Another one-two on the stage, keep the jersey. Rohan followed that first acceleration of Robbie [Squire], and it was too much for me, a little over my limit.”

However, as the race entered the final 30 miles, their advantage over the peloton had been reduced to around one minute.

With the peloton fast on their heels, Clark decided to attack his breakaway companions during the approach of the Hoosier Pass, with Caruso in two.

Murphy gave chase, along with the rest of the escapees, but to no avail, as they were soon caught by the peloton.

Shortly thereafter, Clark relented, leaving Caruso to carry on alone for the final 8 miles. But, his time out front was short-lived, as the BMC rider was eventually caught as well.

From there, BMC continued driving the pace up day’s final climb along Moonstone Road.

At one point, Guillaume Boivin (Optum-Kelly Benefits) tried his luck with an escape, but he was quickly reeled back in.

Taylor Phinney (BMC) then took up the task of setting the pace along the climb, briefly opening a slight gap, and forming a small lead group.

Shortly thereafter, Robbie Squire (Hincapie) decided to attack just as the gradient started to kick up. Rohan Dennis (BMC) countered his move, but his teammate, and race leader, Brent Bookwalter, was unable to stay on terms.

Dennis eventually made contact with Squire inside of the final three miles, and went to crest the climb alone.

Meanwhile, Bookwalter managed to catch Squire along the descent.

Dennis went on to drove home the victory, claiming the overall lead by 13 seconds over Bookwalter. 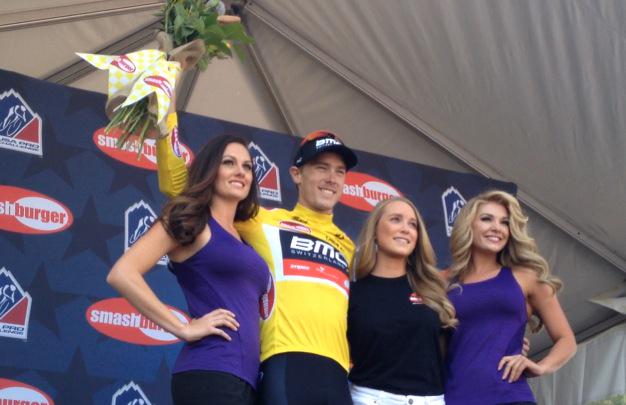