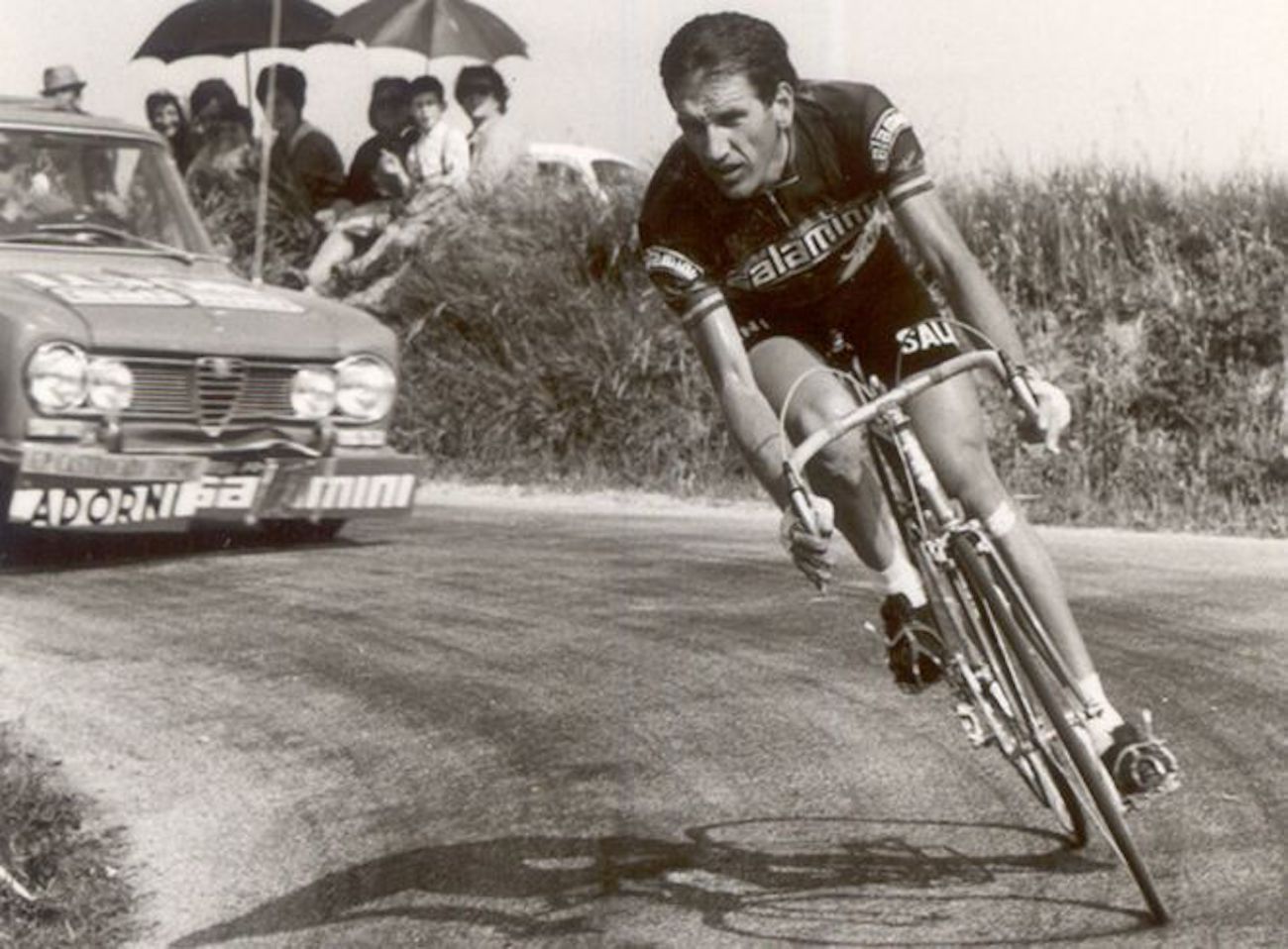 Happy birthday to Vittorio Adorni, who was born on November 14, 1937.

The Italian rider is best known for winning the 1965 Giro d’Italia ahead of fellow Italians Italo Zilioli and Felice Gimondi.

In addition, Adorni won the 1968 World Championship Road Race ahead of Herman Van Springel of Belgium and Michele Dancelli of Italy, as well as his country’s national road championship in 1969.

Adorni was born in Parma, Italy, where he developed into a talented, young rider, later winning the National Amateur Pursuit Track Championships in 1959.

This led to a victory in the Trofeo de Gasperiin following year, with Adorni turning professional in 1962 after winning the Coppa San Geo.

During his first season as a professional rider, Adorni earned his first two major victories while riding for the Philco team, namely stage 15 of that year’s Giro d’Italia and the Tour of Sardinia.

Still viewed as being a domestique, Adorni’s stature as a top-rider in the peloton was further elevated by two more stage victories in the 1963 Italian Grand Tour, while finishing second in the overall classification.

However, 1965 would mark Adorni’s meteoric rise in the sport, after he won the early-season Tour de Romandie, which was followed up with a triumph in the Giro d’Italia.

Next season was highlighted with victories in the Tour of Belgium, along with other stage win and a top-ten finish in the Giro.

1967 saw Adorni reprise his Tour de Romandie title, along with another stage victory and a fourth place finish in the Giro.

The following year, Adorni would be catapulted to international notoriety again, after winning the World Championship Road Race that took place at the Imola race track in Italy.

Adorni famously rode clear with 93 kilometers still remaining, finishing a massive 10 minutes ahead of the peloton that included both his Italian teammates, as well as his regular teammate, Eddy Merckx, who purposely didn’t take up the chase.

Adorni went on to win the Italian National Road Championship title the next year, along with the overall victory in the Tour de Suisse – capped-off with a final stage win in the Giro.

Adorni retired from racing in 1970, subsequently becoming the directeur sportif of the Salvarani team until 1973.

After that, Adorni became president of the Italian riders’ association and a race commentator for the Italian television company RAI.

He later joined the management committee of cycling’s governing body, the Union Cycliste Internationale, in 2001, a position many credit to his reputation as both a respected champion and his gentlemanly persona.

“Thanks to his ability as a patient mediator and natural negotiator, organizing three Grand Tours never turned into a huge fiasco between the UCI and the race organizers, as Vittorio Adorni became cycling’s conscience”, was an opinion shared by many critics back in the day.

Adorni also worked in the sport of skiing, serving in public relations for the 1976 Winter Olympics in Innsbruck, as well as the Summer Games in Montréal that year.

From 1996 until 2004 Adorni also served as President of Panathlon International, which is a non-governmental, non-profit-making, non-political association, without gender or racial distinction that’s recognized by the International Olympic Committee (IOC) for its inclusion of all Panathlon clubs worldwide.

Even in his old age, Adorni can be found making an appearance at the start of each year’s Giro d’Italia as a race dignitary.