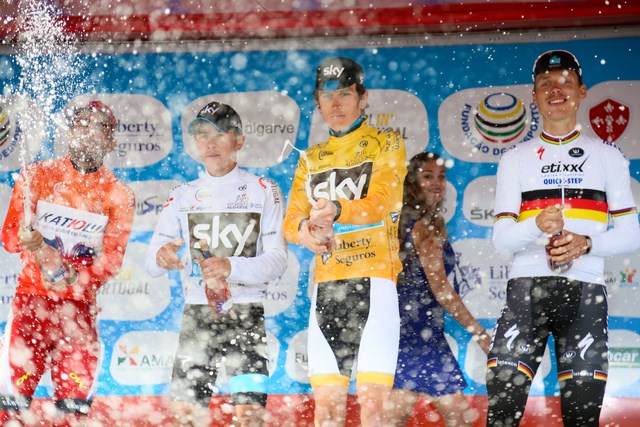 The German Tony Martin (Etixx-QuickStep) and the British Geraint Thomas (Sky) were those who most benefit from the third stage of the Volta ao Algarve, a 19 kilometers “contrarrelógio” between Vila do Bispo and Sagres.

The German champion and world TT champion between 2011 and 2013 was the strongest, pedaling at a speed of 52.174 km/h to stop the clock in 21m51s. The victory was a closed call to the german, as the Italian champion Adriano Malori (Movistar), spent just 403 milliseconds more in his performance.

Geraint Thomas reached the third place of the chrono and reinforced the overall classification leadership. The Team Sky rider remains in possession of the Yellow Jersey Liberty Seguros, 30 seconds ahead of Tony Martin and a 39-second margin over world champion, Michal Kwiatkowski, both from Etixx QuickStep.

“I came to the Algarve to try my condition and do a good test because in February you never know what is your condition. This is my first win of the year. It’s always nice to win again in the Algarve. Every year i come here and, with this victory, I can not imagine a better way to start the season. The gap for Thomas will be difficult to recover. Tomorrow last climb is not as long so you can recover the disadvantage but we have a strong team and if we set up a good strategy, playing with me and Kwiatkowski, we can have a chance. The race is open and we will not give up”,promised Tony Martin, his eyes fixed on the fourth stage.

Tiago Machado (Katusha) was the best Portuguese, ending with the tenth time losing 37 seconds to Martin. In general, the Portuguese rose to seventh place.

“Given the chrono route, I think I did ok, given the profile of the road and the wind. I left everything on the road and now remains tomorrow, which will be a key day”, said Tiago Machado.

Everything can, however, change this Saturday with the queen stage of the Volta ao Algarve. The riders will face a long journey of 218.3 kilometers, starting in Tavira, at 10:50 am, with a estimated arrival to 16:00, on top of Malhão. The goal coincides with a second category climb, that will probably determine the overall rating.