24 Aug 2015
By Campionissimo - In LATEST ARTICLES, THE GREAT RACE 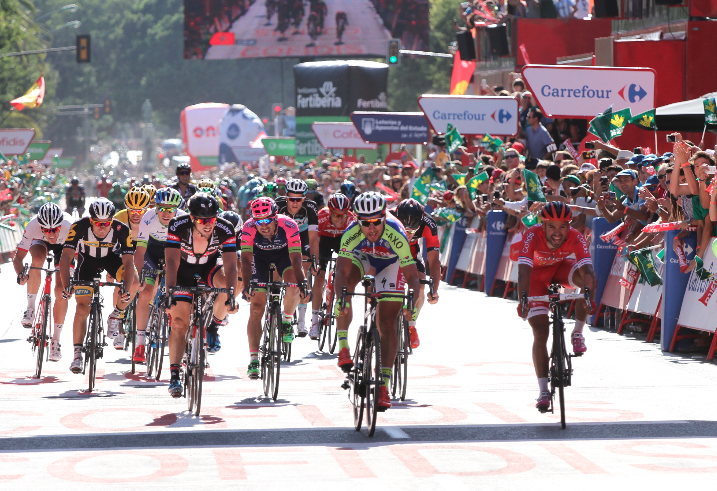 Indeed, after some expert pace-setting by his Tinkoff-Saxo teammates, Sagan launched himself from behind Degenkolb (Giant-Alpecin), while also holding off a late surge from Bouhanni (Cofidis), to seize the win, following 158 kilometers of racing from Mijas to Malaga.

“I have to say thank you to my team-mates because they did a very good job. I’m happy to have the victory and it’s a nice day,” said Sagan.

Meanwhile, there was no change in the overall standings, with Esteban Chaves (Orica GreenEdge) maintaining his five-second lead over Tom Dumoulin (Giant-Alpecin), with Nico Roche (Team Sky) in third place at 15 seconds.

In addition, today’s stage was marred by the withdrawals of Paolo Tiralongo (Astana) and Marcus Burghardt (BMC) following their heavy crashes yesterday, while Fabian Cancellara (Trek Factory Racing) also called it a day after struggling with illness and stomach problems.

From there, the escapees went on to create a maximum advantage 4:20 over the peloton, which for the most part, was being controlled by Giant-Alpecin, Orica-GreenEdge and Tinkoff-Saxo.

Velits was the first of the escapees to be caught after being dropped on the major test of the day, the Cat.1 Puerto del Leon, halfway through the stage.

Despite the presence of overnight polka dot jersey Pedraza in the break, it was Fraile of Caja Rural who picked up maximum points over the Cat.3 Alto de Mijas and the Cat.1 Puerto del Leon – to ensure he took over control of the king of the mountains competition.

At that time, the lead for the escapees was down to just over three minutes over the summit of the second climb with 85 kilometers remaining.

Chavanel tried his luck on the descent, but was soon pegged back by all the escapees except Velits and Koshevoy. But the last man standing was Tjallingii, who was eventually swept up with 14 kilometers remaining.

Already suffering a crash following yesterday’s dramatic pile-up,  Bouhanni crashed on a roundabout with Daniele Bennati (Tinkof-Saxo) ahead of the intermediate sprint with 42 kilometers remaining.

However, he was quickly paced back to the leaders by his Cofidis teammates in time to contest the final sprint in Malaga.

The French rider showed both form and strength in the bunch sprint, but the determination of Sagan denied Bouhanni the victory.

Meanwhile, despite being perfectly led out by his teammate, Dumoulin, Degenkolb was unable to secure a tenth career win at this year’s Vuelta –  settling instead for third place ahead of Jean-Pierre Drucker (BMC) and Maximiliano Richeze (Lampre-Merida).