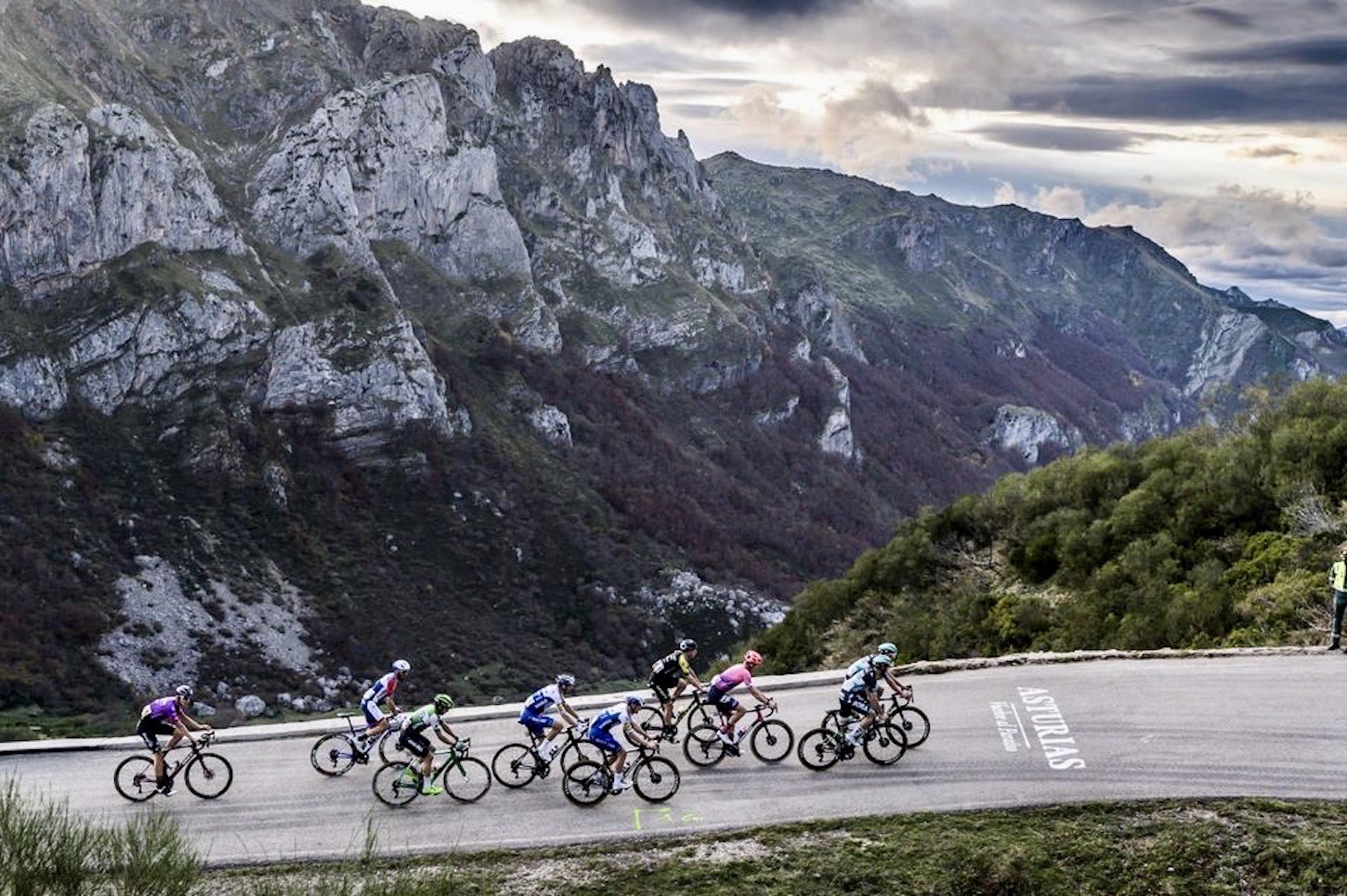 Hugh Carthy (EF Pro Cycling) triumphed in stage 12 of the Vuelta a España today, after the British rider conquered the mighty climb of the Alto de l’Angliru with a final surge during the last 1,200 meters to claim his first Grand Tour victory, while Astana’s Aleksandr Vlasov finished second, followed by Enric Mas of Movistar.

Richard Carapaz (Ineos Grenadiers), who spent the past three days tied with  Primoz Roglič (Jumbo-Visma) in the general classification, crossed the line 10 seconds ahead of the Slovenian rider to finally regain the red leader’s jersey.

However, the lead group quickly swelled to around 20 riders including the polka dot jersey of Guillaume Martin (Cofidis).

Martin took the points at the top of the warm-up category three, as the escapees found themselves two and a half minutes ahead of the peloton.

With around 60 kilometers to go, Martin once again took the KOM points over the second third category ascent.

David de La Cruz (UAE Team Emirates) and Esteban Chaves (Mitchelton-Scott) later attacked the peloton, with Thymen Arensman (Sunweb) and Ivo Oliveira (UAE Team Emirates) soon joining them, while Movistar made their way to the front of the chase, bringing the breakaway group’s gap down to a more manageable one minute mark, while Chaves and Oliveira were dropped by De La Cruz.

Martin again led over the top of the first of three category one climbs on the route today, and on the descent Davide Formolo (UAE Team Emirates) hit the deck having made it across to the break, before Ineos’ Andrey Amador also crashed behind in the peloton.

Martin then pushed on from the breakaway on the descent, taking Roux, Pierre-Luc Périchon (Cofidis) and Ángel Madrazo (Burgos-BH) with him as the gap came down to under a minute with 35 kilometers to the line.

Their move didn’t last long though, as the gap between the break and the bunch came down to around half a minute as Movistar continued to push the pace.

Luis Léon Sánchez (Astana) and Mattia Cattaneo (Deceuninck – Quick-Step) then rode away from the breakaway, with Martin chasing back up to them.

Froome then came to the front to set the pace with 22 kilometers to go, riding away from the peloton with Carapaz on his wheel as the gradient hit 10 per cent on the Alto del Cordal, splitting the peloton as Jumbo-Visma moved back to the front, on high alert now.

Martin again took the points over the summit, as Marc Soler (Movistar) dropped from the peloton behind, as their number was reduced to two dozen riders with 20km to go.

With the Angliru looming ahead the breakaway only had 25 seconds advantage, with Cattaneo the first to drop as the escapees began the climb, and soon Martin and Sánchez were caught as well with just over 10 kilometers remaining.

Froome then started to fall back, as his job for the day was done.

Jumbo-Visma had numbers at the front, Gesink leading their train with Carapaz on his own and then Movistar tucked in behind.

Soler’s group, which contained Froome, were now 1:20 in arrears with just over 7 kilometers to go.

Gesink was still thrashing away at the front, with the Dutch rider eventually pulling off with under 7 kilometers remaining.

Only Vingegaard, Kuss, Roglič, Dan Martin, Mas, Carthy, Woods, Poels, Carapaz and Vlasov were left up the front now, as the gradient started to ramp up to 15% with the worse yet to come.

Carapaz was near the back, while Mikel Nieve struggled to try and get back on terms with those up front, looking to hang on to his GC top 10 as he dangled 20 seconds behind, with Vingegaard still leading.

Poels was dropped with 4.3 kilometers remaining as Carapaz hung on at the back, as the riders were spread across the road as the gradient kept increasing.

Mas then made his move with 3.5 kilometers to go, Kuss not immediately chasing as Vingegaard peeled off and dropped back.

Woods was also dropped, while Martin began running out of steam as well, with Carapaz going around Vlasov to stay in contact. Kuss then started gapping Roglič, receiving orders on the radio as Mas was coming back to them.

Carthy then accelerated with 3 kilometers to go, followed by Vlasov, as Kuss looked around for Roglič, Carapaz and Martin held onto the back of the group.

Mas rounded a hairpin and saw Carthy coming up to him, Vlasov trying to also get on terms as Martin sprinted out of his saddle to try and latch back onto the Roglič group.

The riders all started coming back together, apart from Mas who was managing to maintain his gap off the front, the gradient now ramping up to 23.5%.

Roglič was suffering as Kuss kept checking behind him for his leader. Martin now took up the chase at the front of the group, before Kuss took over again.

The helicopter camera looked as if it was in slomo as the riders battled up the final few kilometres of the climb, Mas’ gap still holding and the Spaniard’s face crumpled in anaerobic effort.

Carapaz had recovered and now launched after Mas, who started coming back quickly under the 2km to go banner, Carthy trying to get across.

The Ecuadorian soon caught Mas, Carthy on his wheel, as Martin and Vlasov tried to bridge across with Kuss and Roglič were a bit further back.

Carapaz turned the screw once more, Carthy rocking all over his bike with Mas just managing his effort for the moment, daylight now between the leading trio and the four chasers behind.

Roglič was struggling, Vlasov and Martin repeatedly distancing him, with Mas and Carthy letting Carapaz set the pace as he rode himself into the red jersey.

Carthy then made his move, accelerating away with just over  a kilometer to go, managing to create a gap under the flamme rouge as Mas tried to react.

His face a picture of pain, Carthy threw his bike all over the road, willing it to continue even if he had nothing left.

Meanwhile, Mas and Vlasov were in pursuit with Carapaz trying to get back to them, but it was too late as Carthy sped away as the gradient relented, Carthy looking furious as he crossed the line.