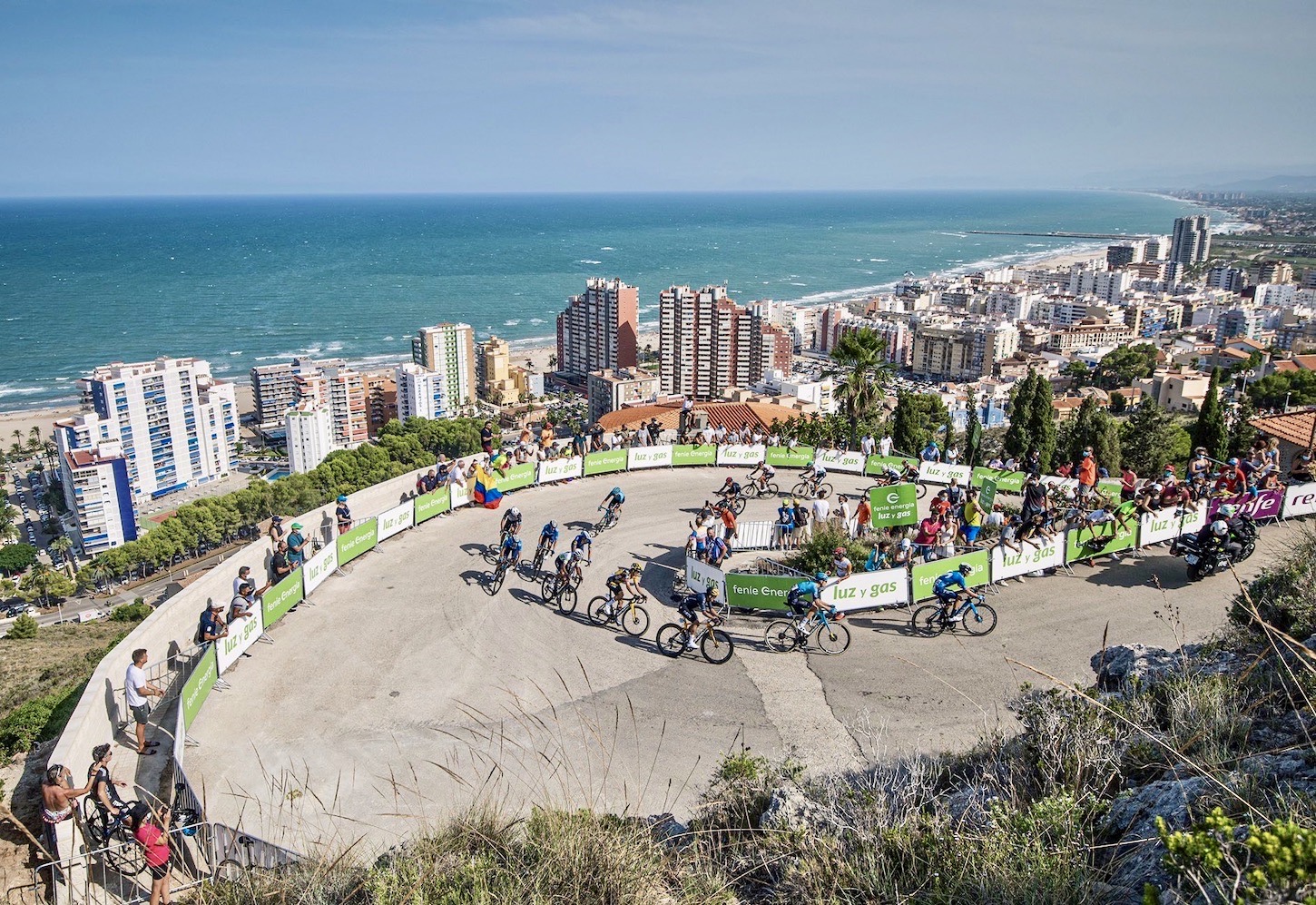 A dramatic stage 7 of the Vuelta a España saw Australian rookie Michael Storer (Team DSM) solo to victory on the double-digit ramps of the Balcon de Alicante after the battle for red behind took an unexpected twist after Spanish veteran Alejandro Valverde (Movistar) crashed out and Britain’s Hugh Carthy (EF Education-Nippo) withdrew with a suspected illness.

Boasting five men in a leading group of 29 riders, Team DSM used their power in numbers to send Storer up the road in what looked to be an effort to pave the way for Frenchman Romain Bardet. But Storer combined well, with Pavel Sivakov (Ineos Grenadiers) and Lawson Craddock (EF Education-Nippo) when a selection formed ahead of the fifth of six categorized climbs in the leg-sapping 152 kilometer stage.

The trio formed shortly after Valverde hit the deck and skidded off the road though the barriers following a high-speed crash on the front of the pursing peloton. Valverde had attacked alongside teammate Jose Joaquin Rojas in an exciting move that also included Ineos Grenadier duo Richard Carapaz and Adam Yates. Valverde sounded the death-knell for the move as the red jersey group eased up with around 40km remaining.

Valverde got back on his bike, but the former world champion called time on what could well be his last ever appearance in the Vuelta.

On the front of the race, Sivakov attacked on the Puerto de Tibi but instantly dropped a chain, sparking an acceleration from his fellow leaders, Storer and Craddock. The Russian rider rallied, passing the American and catching the Australian before the summit, which he crested in pole position to move into the top of the virtual polka dot jersey standings.

In a thrilling subplot to a relentlessly up-and-down stage, Bardet, along with compatriot Kenny Elissonde (Trek-Segafredo) and Jack Haig (Bahrain Victorious) had all drawn level with the Estonian Rein Taaramae (Intermarche-Wanty-Gobert) at the top of the KOM standings with 10 points. But, Sivakov’s rousing return saw the young rider edge one point clear of his rivals ahead of the final climb.

Being used for the first time in Vuelta history, the first-category ascent of the Balcon de Alicante was not much more than a narrow goat track rising through pine trees at a brutish gradient that peaked at 14%.

Carlos Verona, one of the remaining escapees in the 17-man chase group, managed to bridge over to Sivakov and Storer with Andreas Kron (Lotto Soudal) ahead of the decisive climb. Verona, fuelled by passion and adrenaline, who put in a couple of early digs to drop Kron and keep the chase group at bay.

With the main field now five minutes behind, that chase group included Jan Polanc (UAE Team Emirates), Felix Grossschartner (Bora-Hansgrohe) and Sepp Kuss (Jumbo-Visma), all of whom holding a chance of moving into the red jersey at the end of the day.

Storer put in his decisive attack with three kilometers remaining. Verona and Sivakov rode in pursuit, the Spaniard opting to weave up the narrow slope while the Russian sticking stubbornly in a big gear, his sweat-drenched jersey unzipped and flapping by his side. Neither tactic proved as effective as Storer’s dogged determinism.

“I don’t know what I’m capable of in the future,” Storer said afterwards. “This was my goal – to win a race at WorldTour level – so I guess I’ll have to find a new goal now.”

Verona crossed the line 21 seconds down and Sivakov came home 59 seconds behind, his third place enough to see him secure the polka dot jersey as a consolation prize. Kuss and Haig completed the top five ahead of Bardet, Grossschartner, the Lotto Soudal duo of Kron and Steff Crass, and Polanc.

“I had a bit of bad luck when I dropped my chain in the second last climb,” Sivakov said. “I wasn’t really happy to see Storer attacking when he did. Then I came back and he wasn’t too keen to pull. But that’s the race. I’m a bit bitter about it but I think anyway he was the best on the last climb, which was a really hard one. I was feeling really good but I had to do a big effort to get back on the front and that probably cost me a little bit in the last climb. In such hot conditions any big effort you do, you pay. That’s how it is.”

With Polanc tailing off, Grossschartner was now the man with his eyes on the main pack as the clock ticked down to the red jersey of Roglic. It had been the Astana-PremierTech team of Aleksandr Vlasov who set the tempo going onto the final climb, although their Russian leader was unable to keep to his side of the bargain, eventually crossing the finish 13 seconds down on the Roglic group.

Yates provided much of the animation among the race favorites, the Briton leading the way with a long, unseated surge which whittled down the field.

In the end Roglic did enough to keep the red jersey by eight seconds on Grossschartner, with Mas staying 25 seconds down in third place and Lopez fourth at 38 seconds. Bernal, the white jersey, drops out of the top five at the expense of Polanc, while both Haig and Kuss rise 19 places each into a new-look top 10 which is completed by Vlasov (+1:06) and Yates (+1:22).

Besides Valverde and Carthy, who retired with 65 kilometers remaining after another difficult day in the saddle, the big losers of the day included Mikel Landa (Bahrain Victorious) and Fabio Aru (Qhubeka-NextHash), who both dropped out of the top 10 after struggling on the final climb.

There was no change at the top of the green jersey standings, with Jasper Philipsen (Alpecin-Fenix) retaining his slender one-point lead over  Fabio Jakobsen (Deceuninck-QuickStep).

With Roglic looking increasingly comfortable in red, but the gaps still tantalizingly small, the Vuelta continues on Saturday with the largely flat 173 kilometer stage from Santa Pola to La Manga del Mar Menor ahead of a tough mountain slog on Sunday, featuring the showpiece summit finish on the Alto Velefique ahead of Monday’s rest day.