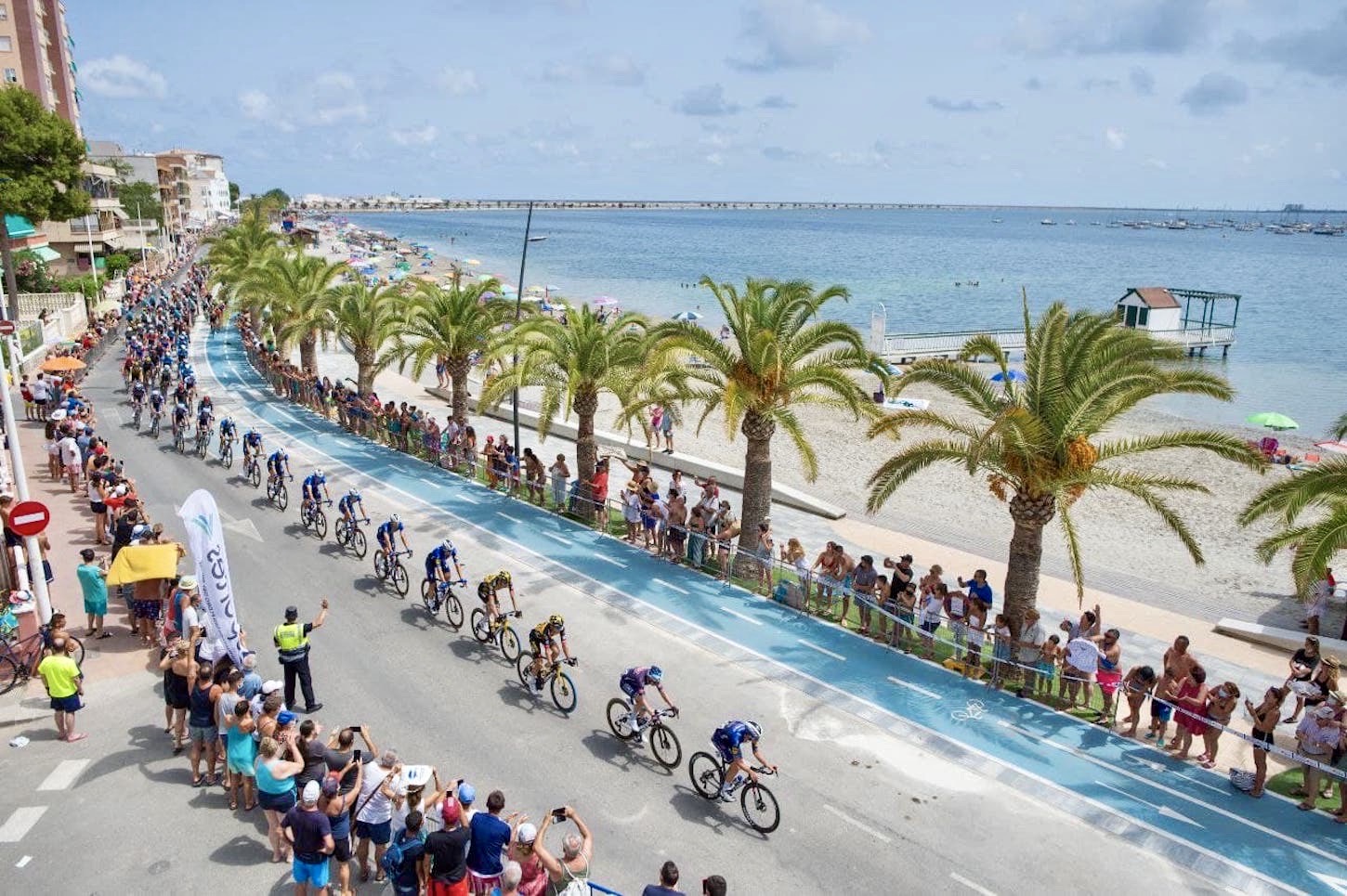 Fabio Jakobsen (Deceuninck quick step) triumphed in a hectic bunch sprint to take his second victory in stage 8 in the Vuelta a España today, beating Alberto Dainese of Team DSM and Jasper Philipsen (Alpecin Fenix), while Primoz Roglic (Jumbo-Visma) retained his eight-second lead in the general classification before another mountainous stage tomorrow.

After a tough day in the Alicante hills the riders headed to the Costa Blanca and followed the road south from Santa Pola to the seaside resort of La Manga del Mar Menor.

A mostly flat stage with just 900 meters of total elevation gain and a simple run into the finish, the 173.7 kilometer route was expected to unfold into an inevitable sprint finale.

However, crosswinds blowing in from the Mediterranean raised fears at the beginning of the stage, causing many to speculate the peloton would be spilt into echelons on the way into Manga del Mar Menor.

But, the strong winds that were forecasted never really materialized, with the peloton controlling a small breakaway group containing Ander Okamika (Burgos-BH), Aritz Bagües (Caja Rural-Seguros RGA) and Mikel Iturria (Euskaltel-Euskadi) throughout the day before reeling the trio in with 37 kilometers km to go.

Heading into the final 20 kilometres, GC teams such as Ineos Grenadiers, Bahrain Victorious and Movistar mingled at the front alongside the sprint squads of Groupama-FDJ and Deceuninck-QuickStep.

The work and high pace continued as the riders hit the final 10 kilometers, and there was little incident to report on the wide roads on the run-in. At that point, the GC teams were still in charge, keeping their men safe before the three-kilometre mark.

The sprint squads of Alpecin-Fenix, Team DSM, Groupama-FDJ, and Deceuninck-QuickStep moved up with seven kilometers to go as the riders sped towards the finish, with the latter two squads most prominent on the front.

At three kilometers to go, Team BikeExchange and Bora-Hansgrohe had also moved up, with the German team joining Groupama-FDJ lining up at the front. A kilometer later, Carlos Canal (Burgos-BH) tried a flier but was caught after 500 meters, with UAE Team Emirates taking over the pacemaking heading into the final kilometer.

Deceuninck-QuickStep’s Florian Sénéchal took charge heading into the final few hundred meters, leaving it all on the road before pulling off early on the short finishing straight. His move left a number of sprinters going earlier than they’d like to, while Jakobsen could jump through the middle and push on to victory with little challenge from behind.