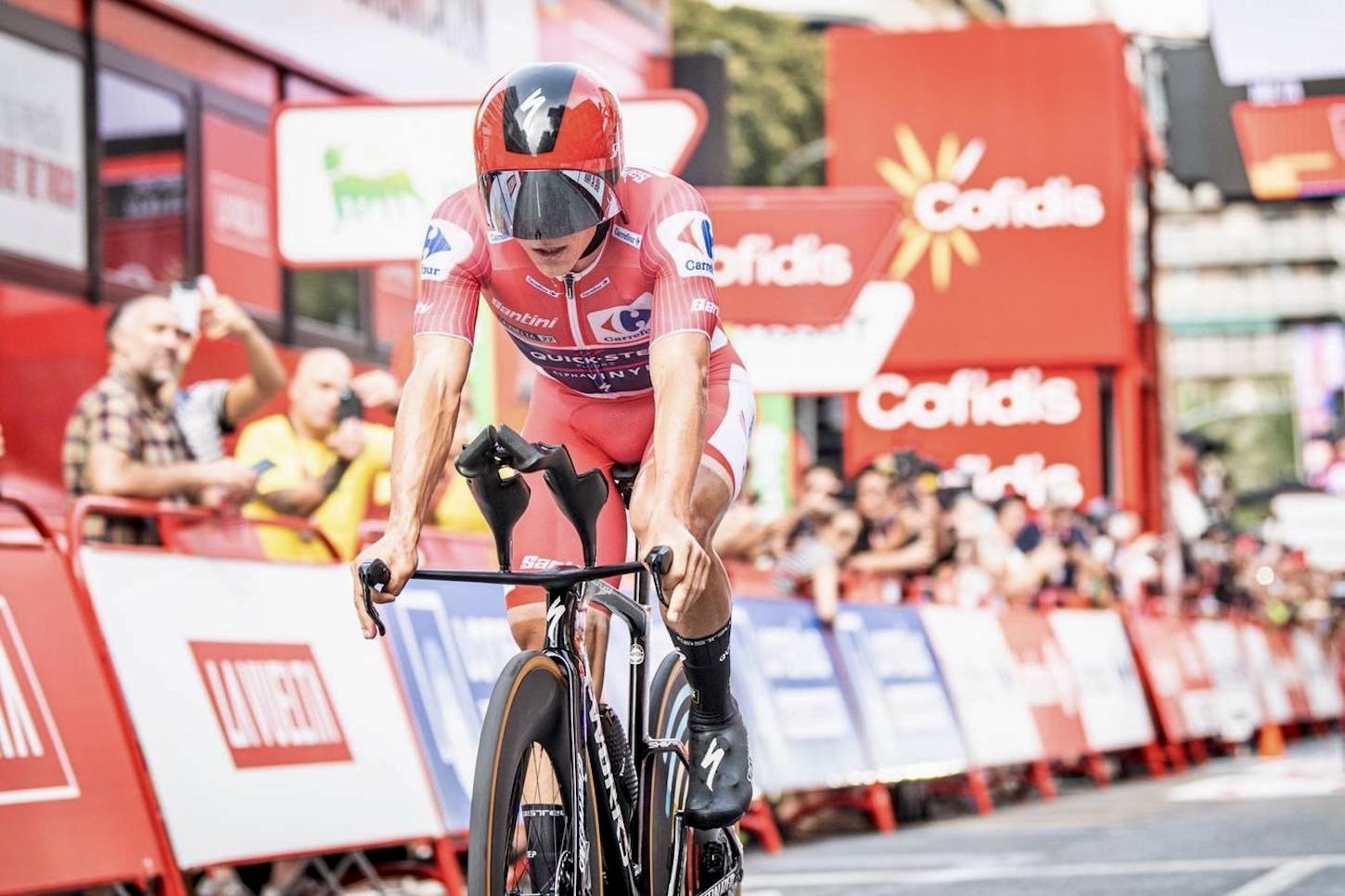 Remco Evenepoel (Quick-Step Alpha Vinyl) stamped his authority on this year’s Vuelta a España, after the Belgian rider stormed to victory in today’s time trial, beating his nearest rival by almost a minute.

In the meantime, Primož Roglič (Jumbo-Visma) clocked the next fastest time, finishing some 48 seconds behind Evenepoel, while Remi Cavagna (Quick-Step Alpha Vinyl) rounded out the podium a minute behind the winner.

Evenepoel was 36 seconds up on his teammate Cavagna at the second intermediate time check and continued to add time to his margin over the second half of the course. Roglič gained time on Cavagna following the second check, having been a second slower than the French rider, but he conceded an extra 11 seconds to Evenepoel along the way.

Roglič now moves into second overall, but Evenepoel extended his advantage substantially in the GC with a 2:41 lead ahead of stage 11. Enric Mas (Movistar), who started the day in second place, limited his losses as much as possible but dropped down to third after giving away 1:51 to Evenepoel in the TT.

“That’s a big surprise,” Evenepoel said when he was told of the 48-second margin of victory. “I saw that my teammate Remi did very well and, actually, it was perfect that he did such a good time trial for me to know the good times. When I was still sitting on the bus, I could see that everybody was actually slowing down in the second part compared to his time.

“I knew I just had to push one power all the time because it was flat with a super hard finish. My legs were so heavy on this last bump, it was really hard, but it was super nice to win this time trial in the red jersey. It’s an amazing feeling.

“I’m just so happy to take a stage win. I think I achieved what I came to do and now we’re going to fight and try to win this Vuelta. The pressure is off, I won a stage, so now the whole team is super confident. Everyone is performing so well, now we just need to fight to keep this jersey and take it home to Wevelgem.

Ineos Grenadiers duo Carlos Rodriguez and Pavel Sivakov completed the top five with solid rides 1’22” and 1’27” in arrears. Spanish debutant Rodriguez retained his fourth place on GC at 3’55” while Frenchman Sivakov rose one place to ninth at 7:06.

Simon Yates (BikeExchange-Jayco) moved above 19-year-old Spaniard Juan Ayuso (UAE Team Emirates) into fifth place after a solid ride for seventh place, one spot behind his team-mate Lawson Craddock, the American TT champion, and one place ahead of compatriot Tao Geoghegan Hart (Ineos Grenadiers), who rose into the top 10.

Joao Almeida (UAE Team Emirates) retained his seventh place on GC despite taking a wrong turn in the closing moments of the course, a mistake that cost him around 25 seconds. Almeida will now be looking over his shoulder at Miguel Angel Lopez (Astana-Qazaqstan) after the Colombian put in the TT performance of his career to take ninth place.

The Spanish Grand Tour continues tomorrow with the 193 kilometer to Cabo de Gata, where the sprinters should contest a fast finish on the salty sea flats of south-eastern Spain.