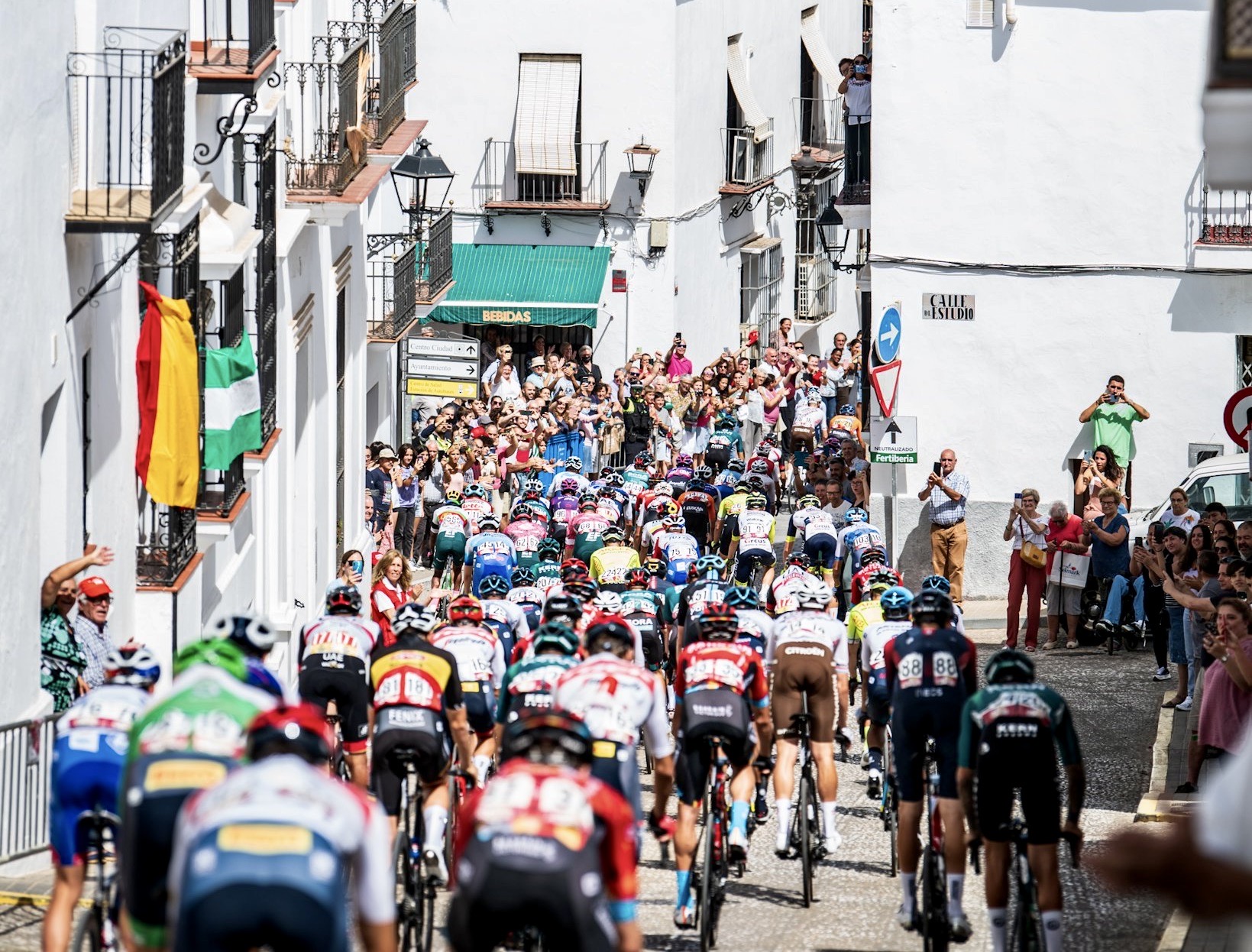 The trio was part of a 13-rider breakaway, which eventually formed a sizable lead after a hectic first hour of racing. Inside the final 18km Lawson Craddock (BikeExchange-Jayco) made a number of attacks as he attempted to leave his fellow chasers behind.

With 2.5km of the final climb remaining Craddock still had a small lead but was soon joined by a handful of riders, including Uran, Pacher, Herrada, Clement Champoussin (AG2R Citroën) and Marc Soler (UAE Team Emirates). What followed was an enthralling uphill slugfest, as they took turns in attacking each other, with the line drawing ever closer.

However it was Uran who proved strongest, passing Herrada with around 500m to go and holding on for a famous stage win.

Thomas De Gendt (Lotto Soudal) was the first attacker of the day, but the Belgian who hadn’t seen a break since stage 3 didn’t last long out front before being caught. His move did kick off the fight for the breakaway with Clément Champoussin (AG2R Citroën), Robert Stannard (BikeExchange-Jayco), and Ryan Mullen (Bora-Hansgrohe) among the other earely, unsuccessful attackers.

It would take 40km, raced at an average of 50kph, before a breakaway got away from the peloton, with major names such as Marc Soler (UAE Team Emirates), Bob Jungels (AG2R Citroën), Rigoberto Urán (EF Education-EasyPost), and Fred Wright (Bahrain Victorious) making the move.

The breakaway riders worked well together for much of the day, with little to fight over before the final kilometers of the day. It wasn’t until the 20km to go mark that the riders decided to start taking their chances and attack.

Craddock was the first to make a move, jumping away over an uncategorized climb ahead of the descent towards the base of the Tentudía. He was brought back as Wright struggled out the back, but was quick to counter, heading off alone to pull out a gap on the way down.

The American, fighting for his first career Grand Tour stage win, hit the final climb alone, though he enjoyed only a slim margin of 10 seconds as he began the climb. Further back, the peloton still lay at seven minutes, unworried by the breakaway moves as Ineos Grenadiers, Movistar, and Astana Qazaqstan led the way into the start of the mountain.

Craddock’s gap only grew on the lower slopes of the climb, jumping up to 25 seconds as he closed in on the final 5km. Back in the chase group, Gesbert, Urán, and Champoussin made a move as they sought to haul in Craddock.

Into the final 4km, the trio were within 10 seconds of the sole leader, though Gesbert soon let go with the Frenchman unable to keep the pace as Soler, Herrada, and Pacher made their way across. A kilometer later, the pace behind had stalled a little, with Craddock holding his advantage and even adding a few seconds.

The final 2km saw the chasers start to try and attack each other on the 7% slopes, though Craddock had the advantage of making and following his own pace as he approached the finish. It was his former EF teammate Urán led the way across with Herrada following, the pair finally making the catch just under the flamme rouge.

Champoussin and Soler also got across, bringing the lead group to five men in the battle for the finish line. The AG2R man immediately went on the offensive, though Herrada was quick to catch and make an attack of his own soon after.

Champoussin, Urán and Gesbert played their cards on the climb and attacked with just over five kilometers to go. They reduced their deficit to 12 seconds with 3.5km remaining, with Gesbert then cracking.

Urán and Champoussin kept driving onwards but were joined by first Pacher and then Soler and Herrada. Soler attacked heading into the final 2km, but was reeled in. Craddock’s gap had dropped to ten seconds there but a stall saw that increase again slightly. He kept driving, only to be caught by Urán, Herrada and Soler with one kilometer to go.

A slight stall enabled Champoussin to get back up to that trio and he launched, but Herrada whipped past with 850 meters remaining. Uran was chasing hard and inched closer, then sprinted past, digging in to hold off Pacher and Herrada for the win.

Behind Mas attacked repeatedly but was marked by Evenepoel, with João Almeida (UAE Team Emirates) the only one of those in the top ten to gain time. He raced in nine seconds clear of Evenepoel and Mas, while Juan Ayuso (UAE Team Emirates) gave up a further two seconds.

Conspicuously absent from today’s stage was Primož Roglič (Jumbo-Visma), who was forced to abandon the race due to injures he sustain in a bizarre crash at the end of stage 16 yesterday.

“Unfortunately, Primož Roglič will not be at the start of stage 17 as a consequence of yesterday’s crash. Get well soon, champion! Thank you for all the beautiful moments in this Vuelta. You had ambitious plans for the final days, but sadly it isn’t meant to be,” the team stated.