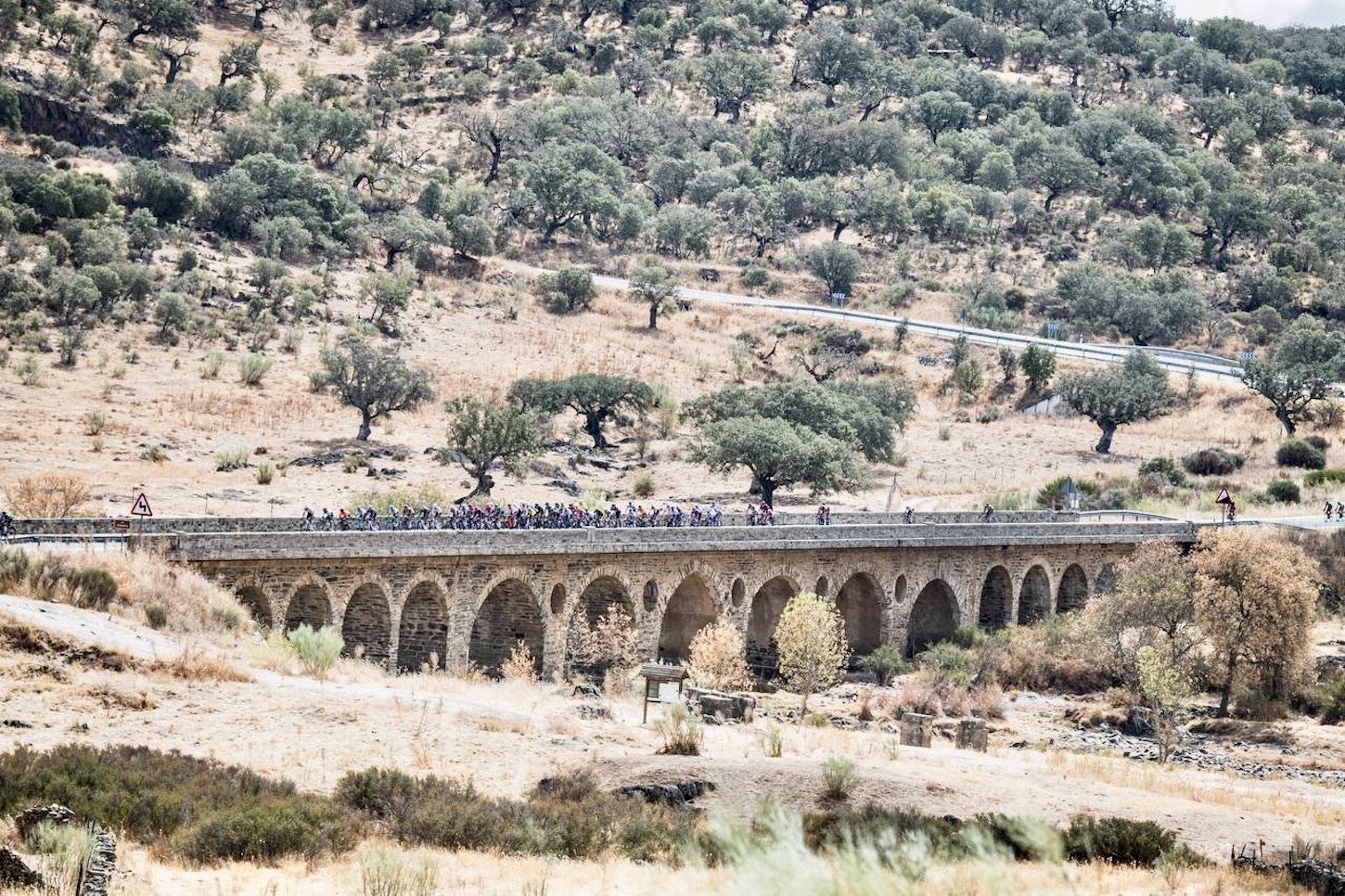 Remco Evenepoel (QuickStep-AlphaVinyl) stamped his authority on this year’s Vuelta a España today, triumphing atop the Alto del Piornal after outsprinting Enric Mas (Movistar) after the duo caught lone escapee Robert Gesink (Jumbo-Visma) within sight of the line.

A tumultuous stage of the Vuelta saw João Almeida (UAE Team Emirates) spread panic among the podium contenders with a long-range attack, but Evenepoel looked unflappable throughout a breathless day of racing.

Evenepoel responded promptly to a series of accelerations from Mas on the final ascent, unleashing a brace of efforts of his own as the red jersey group constantly fragmented and reformed in the closing kilometers.

Mas’ final attack came  inside the final kilometer, with Evenepoel the only man able to follow. From there, the Spanish riders acceleration reeled in Gesink, the last survivor of the day’s early break, with red jersey later sprinting to victory.

Indeed, the Belgian rider  crossed the finish two seconds ahead of Mas and Gesink, while Jai Hindley (Bora-Hansgrohe) led the chasers across the line a further 13-seconds back.

Evenepoel is now 2:07 ahead of Mas in the overall standings, while Juan Ayuso (UAE Team Emirates) is third at 5:14.

Miguel Angel Lopez (Astana-Qazaqstan) moves up to fourth overall after Carlos Rodriguez (Ineos) conceded ground on the final climb. Rodriguez fell earlier in the stage, with his injuries apparent during the closing kilometers.

King of the mountains Jay Vine (Alpecin-Deceuninck) also came down in the same crash and was forced to abandon the race due to his injuries.

It took 50km for a break of 32 riders to form at the front of the race, including a raft of quality climbers keen to win on the final ascent. They included Tao Geoghegan Hart and Richard Carapaz from Ineos Grenadier, Hugh Carthy (EF Education-EasyPost) and Thibault Pinot (Groupama FDJ).

The group’s advantage drifted up to nine minutes at one point but things started to breakdown when the hit the Alto del Piornal with about 60km to go where there carthy attacked. A handful of his breakaway companions caught him and Carapaz crested the climb first clearly on a mission to hoover up as many mountains points as he could do.

The front group was thinning and a second chase group started by Joao Almeida’s (UAE Emirates) earlier attack from the peloton was starting to swell.

By the time the riders hit the base of the final Alto de Pironal climb just Carapaz, Carthy, Pinot, Élie Gesbert (Arkea Samsic), Robert Gesink (Jumbo-Visma) and Sergio Higuita (Ef Education-EasyPost) remained in the front group. With an advantage around the two minute mark.

Gesbert was the first to attack but Gesink made it across to him. With 6km to go the Dutchman attacked to go solo.

Punctuated by brief lulls, the attacks would continue all the way to the finish with Evenepoel and Mas the main instigators. The surges and following slow helped Gesink, who could do nothing but pace himself up the climb, but with 700 meters to go an attack from Mas saw the gap fall to just nine seconds.

In the end, it wasn’t to be for Gesink, who saw Evenepoel and Mas ride up to him with just under 400 meters to go. The Dutchman tried to push on but couldn’t react when Evenepoel launched for the line with 200 meters to go.