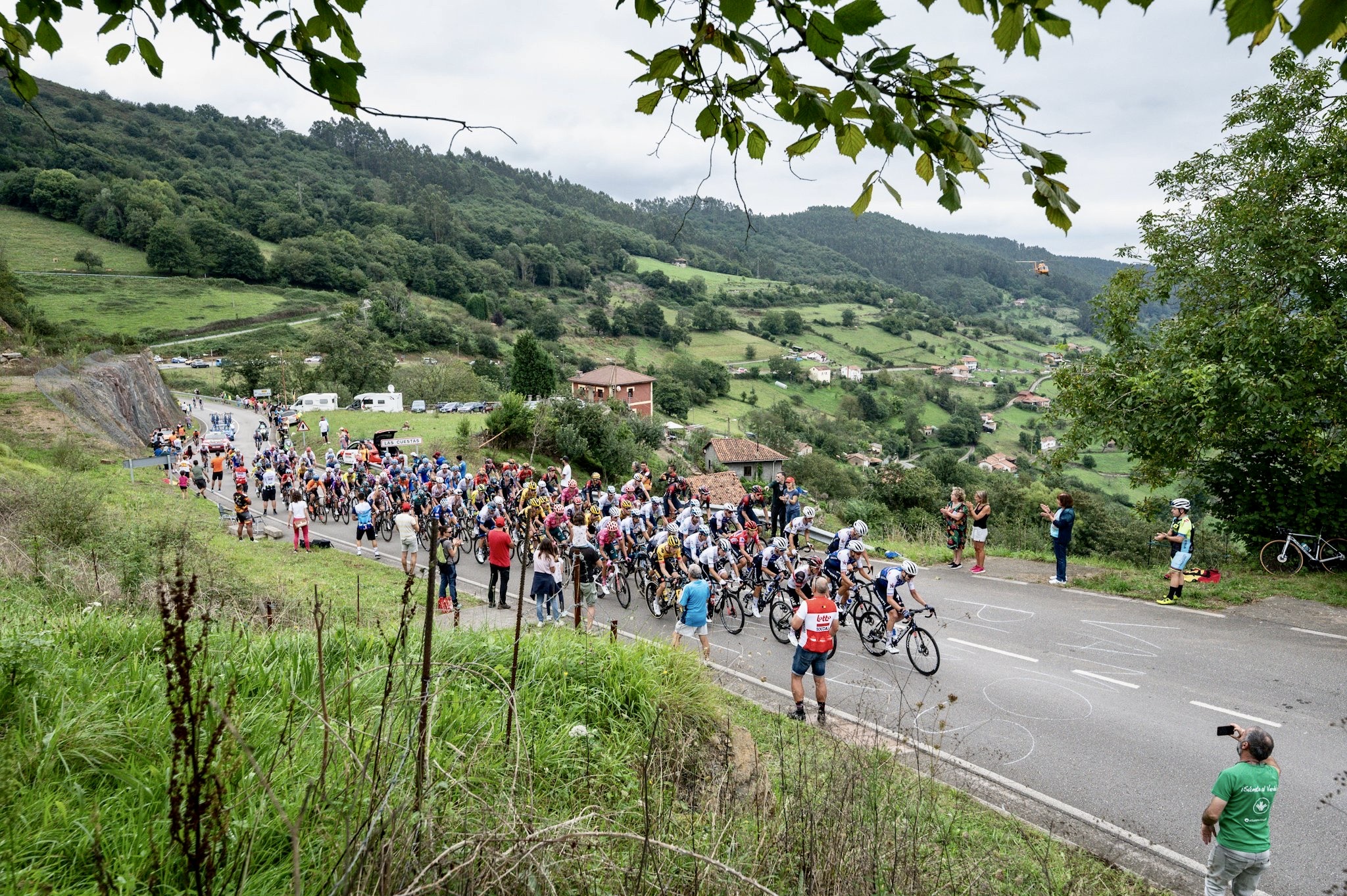 Jay Vine claimed stage 8 of the Vuelta a España today, triumphing atop the summit finish of the Colláu Fancuaya, after the Australian rider once again proved to be the strongest man from the breakaway group, soloing home from a powerful group to ride through the fog to not only seize the day’s honors, but to secure the polka dot mountain jersey as well.

Marc Soler (UAE Team Emirates) put in a valiant effort to try and rein in the Alpecin-Deceuninck rider during the last kilometers of the steep Asturian climb, but it was Vine who prevailed once more, dragging out 43 seconds by the time he crossed the finish line.

Meanwhile, race leader Remco Evenepoel (QuickStep-Alpha Vinyl) was an imperious figure on the final ascent, pushing the pace in a group of five in the finale, followed by Enric Mas (Movistar) and Primož Roglič (Jumbo-Visma) who finished on the same time as the Belgian rider. Simon Yates (BikeExchange-Jayco) and Carlos Rodríguez (Ineos Grenadiers) finished 13 seconds back of the red jersey.

It took some time for the breakaway to form in the early goings of the 153.4 kilometer stage from La Pola Llaviana, with multiple attempts brought back before the decisive move went clear. The escape group that did ultimately form out front included some noteworthy names, with Vine, Soler, Taaramäe, Mikel Landa (Bahrain Victorious), Alexey Lutsenko (Astana Qazaqstan), and Mads Pedersen (Trek-Segafredo) among them. They would eventually be joined by Thibaut Pinot, who bridged up with the help of Groupama-FDJ teammate Sebastian Reichenbach. With Bruno Armirail also out front, the French squad had three riders in the break

Pedersen’s day out front was rewarded at the intermediate sprint with around 25 kilometers to go, where he took the maximum points and thus secured a takeover of the green points jersey from Sam Bennett. A few minutes later, he drifted back out of the break.

The pace in both groups was high as the road angled upward in an uncategorized appetizer for the steep finishing climb. At the official start of the first-category finale with just over 10 kilometers to go, seven surviving breakaway riders still had a gap of three and a half minutes on the peloton.

Lutsenko put in a surge out front with around 6 kilometers left to race, but Vine hung with him and then pressed on solo. Behind, Pinot and Rein Taaramäe, shortly thereafter joined by Soler, settled into chase mode.

Back in the bunch, QuickStep set a torrid pace on the steep gradients, and the tempo proved too high for one rider after another, including Carapaz. With his Ineos teammate dropped, Tao Geoghegan Hart put in a big dig, drawing out Evenepoel and a handful of others. Before long, however, Geoghegan Hart faded along with his teammate Pavel Sivakov, leaving Carlos Rodríguez to fly the Ineos flag in the much-reduced GC group with Evenepoel, Roglič and Mas. Yates worked his way back up to make it a quintet.

Out front, there would be no catching Vine, who cruised to a convincing victory. Behind, Evenepoel, Mas, and Roglič distanced Yates and Rodríguez in the final few hundred meters.

When all was said and done, Vine had the stage and the mountains jersey, Evenepoel continued to wear red, and Pedersen had taken over the green jersey.

“At the start, literally on the first climb, I thought, ‘I don’t know if we’re going to be able to stay away,'” Vine said of the stage.

“They seemed to be chasing us pretty intently, so I decided to definitely target the first couple of KOMs. But then in the valley we had a really good group. The FDJ guys had three in the move and QuickStep were just controlling so from that point on I went, ‘OK, if I can get the KOM points without too much of a struggle, I’ll go for them,’ but the stage was still the main goal.”