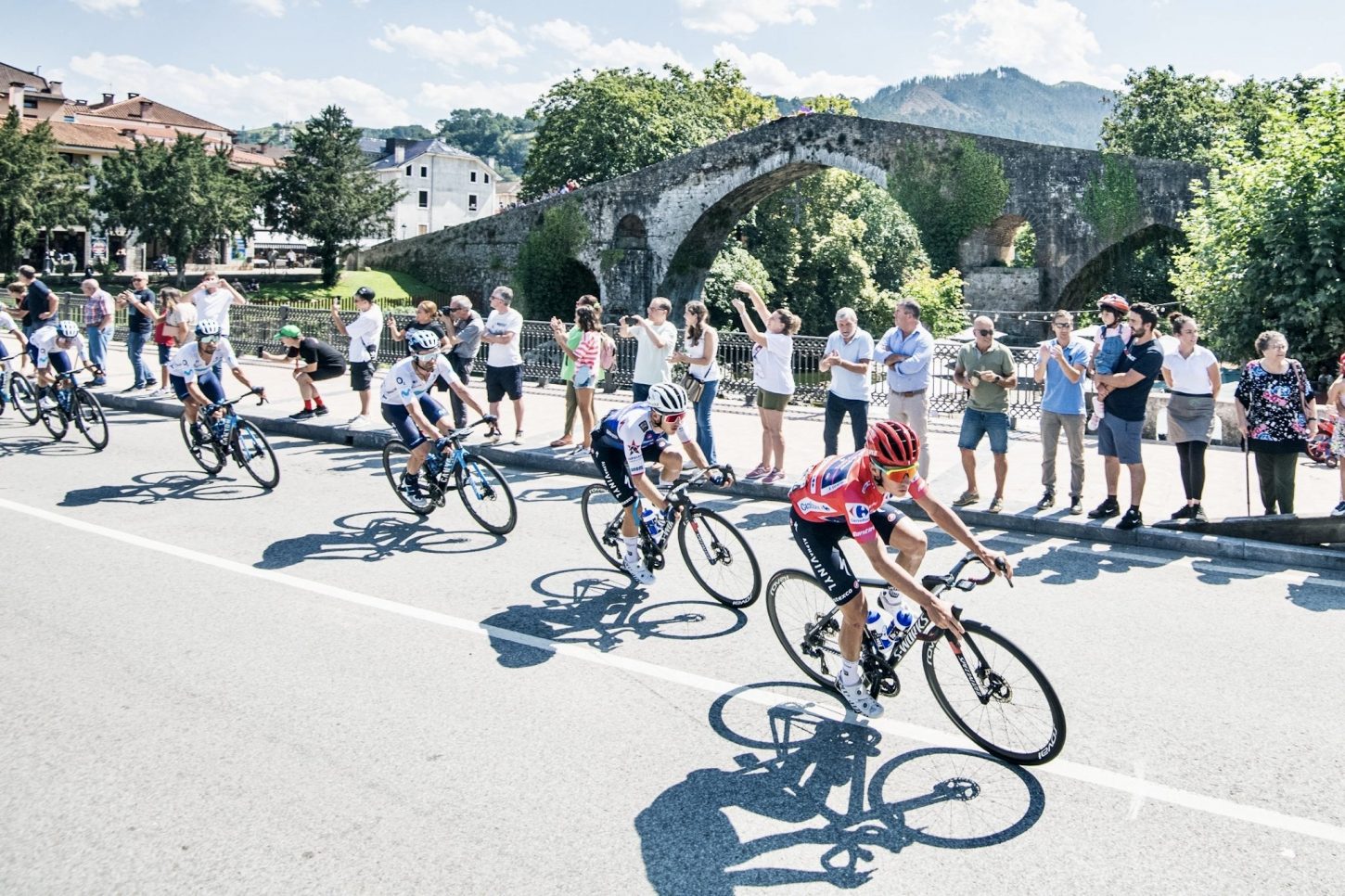 Remco Evenepoel put his red jersey rivals to the sword on the savage incline of Les Praeres, while Louis Meintjes took the biggest win of his career in Stage 9 of La of the Vuelta a España today.

Evenepoel (Quick-Step Alpha Vinyl) jettisoned his rivals one by one, with defending champion Primoz Roglic (Jumbo-Visma) and Spanish debutant Juan Ayuso (UAE Team Emirates) fading before the Belgian despatched Enric Mas (Movistar) on the 25% ramp to the finish.

The man in red managed to reel in the lion’s share of the day’s breakaway but even his zippy pace was not enough to deny a maiden Grand Tour stage win for  Louis Meintjes (Intermarche-Wanty-Gobert Materiaux). Meintjes proved himself the strongest of a nine-man move and took the win ahead of Italian duo Samuele Battistella (Astana-Qazaqstan) and Edoardo Zambanini (Bahrain Victorious).Evenepoel crossed the line for fourth place at 1’34” before his rivals Ayuso (sixth), Mas (eighth) and Roglic (10th) came home in dribs and drabs. The gaps were not staggering but the Belgian will now enter Tuesday’s time trial – for which he is the overwhelming favourite – after Monday’s rest day with a margin of 1’12” over Mas and 1’53” over Roglic.

The top five is completed by Spanish youngsters Carlos Rodriguez, who took an impressive seventh for Ineos Grenadiers, and 19-year-old Ayuso, both riders just over 2’30” in arrears. Simon Yates, the last winner at Les Praeres in 2018, rose one place to sixth place, the British rider from BikeExchange-Jayco 3’08” behind the Belgian tyro taking his debut Vuelta by storm.

Despite losing key climbing domestique Pieter Serry through Covid ahead of the stage, Evenepoel and his Quick-Step team controlled the 171.4km stage through Asturias from start to finish.By contrast, Roglic’s Jumbo-Visma – who lost the influential American climber Sepp Kuss with a fever – found themselves on the back foot ahead of the decisive climb after a crash brought down the Australian Chris Harper, leaving Roglic very isolated and extremely vulnerable going forward.

“We really wanted the breakaway to go for the stage,” 22-year-old Evenepoel said while warming down. “It’s always better because the bonus seconds are gone. Then it was up to me to try and take time. I had the legs and I’m really happy that we could show how strong we are as a team.

“An advantage is important whatever the name or rider. But the Vuelta is still very far from over. We always have to be focused and careful, but for sure it’s a better situation to be ahead than behind. A big thumbs-up for the team today, who did everything perfectly.”

Meintjes’ win came six weeks after the South African came second on Alpe d’Huez in the Tour de France the day Tom Pidcock took the win for Ineos Grenadiers. It was also the teams third Grand Tour stage win this year after Biniam Girmay and Jan Hirt struck gold in the Giro d’Italia.

“It’s something special and still needs some time to set in. I’ve actually never been on the podium of a World Tour race so this was one of my main goals before stopping my career,” 30-year-old Meintjes said after a result which saw him rise to 16th place in the general classification.

“The last few days in the mountain finishes I wasn’t quite fast enough to finish with the GC guys. If I can’t get a result that way then the best is to go in the breakaway. It worked out perfectly today. I was quite lucky. My team controlled it quite good in the start and I tried one time and I picked the right breakaway.”

A feisty start to the stage saw numerous breakaway attempts thwarted as the riders negotiated rolling roads along the green and rugged Atlantic coast of Asturias. Belgian breakaway specialist Thomas De Gendt (Lotto Soudal) was among a handful of riders to try his luck, with Frenchman Quentin Pacher (Groupama-FDJ) enjoying a brief cameo off the front before a move finally stuck.

Just as this move was forming, a flashpoint broke out involving Spain’s Marc Soler (UAE Team Emirates) and Australia’s Robert Stannard (Alpecin-Deceuninck), the latter appearing to box in the former while he tried to force a gap. With Soler being the closest rival to Alpecin’s Jay Vine in the KOM standings, Stannard clearly had his team-mate’s polka dot jersey in mind. The same can be said when he and team-mate Jimmy Janssens proceeded to share out the KOM points over the first four of the day’s five climbs after both riders managed to make the move.

The Alpecin-Deceuninck duo were joined by Meintjes, Battistella and Zambanini, as well as Dylan van Baarle (Ineos Grenadiers), Filippo Conca (Lotto Soudal) and Jose Diaz (Burgos-BH) and Simon Guglielmi (Arkea-Samsic). Over the succession of gentle climbs in the Asturias mountains the gap grew to a maximum advantage of just over five minutes as Stannard and Janssens had the last laugh over Soler, moving above the Stage 5 winner and protecting double stage winner Vine’s grasp on polka dots.

Once the endgame came into play, Janssens rode clear with Battistella with 10km remaining although the two almost came to blows when the Italian berated him for not contributing.

Meinjtes made light of the brutal average gradient of 12.9% and kept his cool in the face of the fireworks being set off by Evenepoel in the chasing group behind.

A crash on a fast descent to the foot of the climb brought down Jumbo-Visma’s Harper and Tao Geoghegan Hart (Ineos Grenadiers), splitting the front of the main pack ahead of the decisive rise to the line. If Ayuso lit the torch paper early on to force a response from Evenepoel, Roglic and Mas, it was the red jersey of Evenepoel who was soon ruling the roost.

There was better news for Ineos Grenadiers with Rodriguez rallying behind and enjoying a brief relay with fading escapee Van Baarle on the challenging climb. But it was all a fight to finish behind Evenepoel, who himself needed another kilometer or so if he wanted to take a famous win in red.

That win could come on Tuesday during the 31.1km time trial to Alicante for which the TT specialist will be the outright favorite – a chilling prospect for his rivals going into Monday’s much needed rest day.