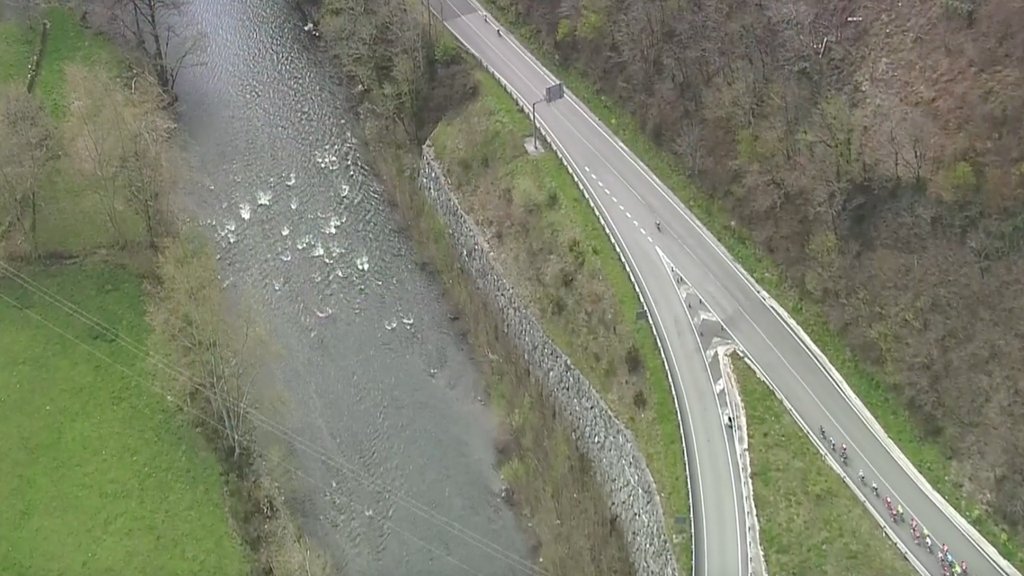 Stephen Cummings (Dimension Data) won stage 3 of the Vuelta al Pais Vasco today, after executing a surprise attack during the final kilometer that proved to be enough to hold-off any late challenges from a charging peloton.

Meanwhile, Simon Gerrans (Orica-GreenEdge) finished in second, after winning the bunch sprint, followed by Fabio Feline (Trek-Segafredo), who rounded out the podium in third.

After today’s stage, Mikel Landa (Team Sky) continues to lead the overall classification by one second ahead of Wilco Kelderman (LottoNL-Jumbo), while Sergio Henao (Team Sky) remains in third a further 5 seconds back.

However, only Denfil could maintain a steady pace along the steep grade of the Aldo de Aritxulegi, with Oomen struggling to stay onboard while the rest of the group fell back.

Back in the peloton, Michael Albasini (Orica-GreenEdge) could no longer contain his enthusiasm, and lead an attack that was followed by Dario Cataldo (Astana), Dani Navarro (Cofidis) and Laurens De Plus (Etixx-QuickStep), ultimately clawing back enough time to where they were within 30 seconds of the two leaders at the summit.

Heading up the next climb of the Aldo de Agina, the duo was still holding onto their 30 second advantage, while Adam Yates (Orica-GreenEdge) and Pierre Rolland (Cannondale) managed to bridge their way to the newly formed chase group.

Shortly thereafter, the Denfil and Oomen were caught.

From there, De Plus led the breakaway group over the final climb of the day, the Alto de la Piedad, while Team Sky continued to push the pace of the peloton from behind in hopes of reeling back the leaders, who were now holding onto a slight gap of just 15 seconds.

With the peloton looming closely behind, Navarro decided to attack his breakaway companions near the top of the climb, as Yates led th pursuit in earnest.

From there, Thibaut Pinot (FDJ) was the first to attack out of the peloton, followed by Landa, Nairo Quintana (Movistar), Sammy Sanchez (BMC) and Rui Costa (Lampre).

After the descent, Navarro hit the flat section of pavement with 5 kilometers remaining, opening up a slight lead over the chase group.

At that point, alongside Yates, Rolland decided to attack his breakaway companions, with the two quickly catching and passing Navarro during the final 2 kilometers.

However, it wasn’t long before the breakaway was back together, with De Plus launching another attack.

But, once again, the field came back together with 1 kilometer remaining, with Cummings executing his winning move that served to stem any final aggressions from the peloton.