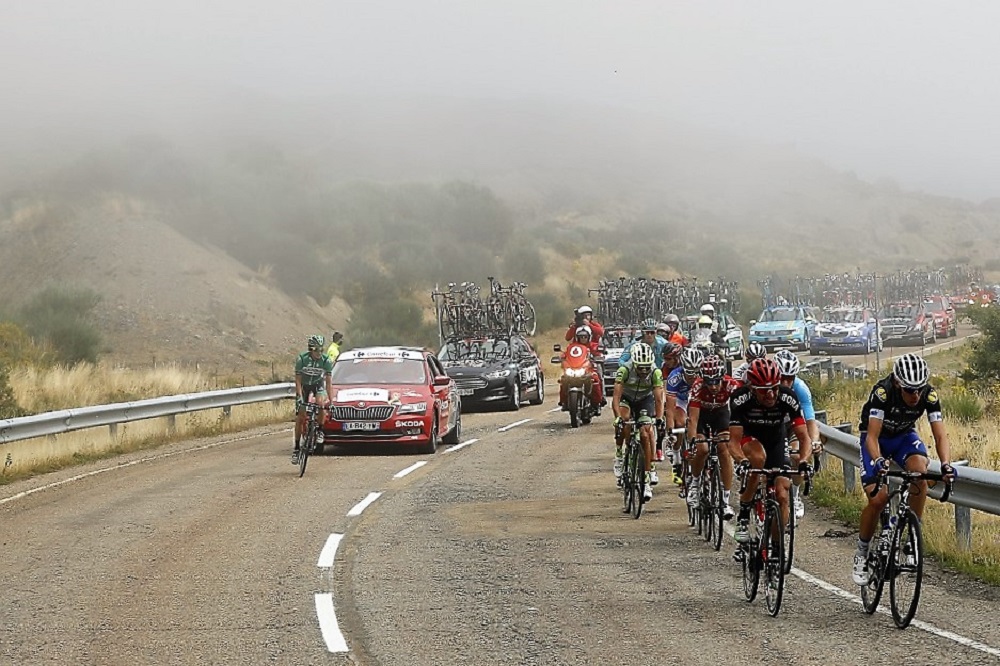 David de la Cruz earned his Etixx-Quickstep team its third stage victory in this year’s Vuelta a España today, after the Spanish rider capitalized on his rival’s mechanical malfunction during the summit finish of the of the Alto owl Naranco.

De la Cruz was initially part of a 12-rider breakaway group, before escaping with Dries Devenyns (IAM Cycling) along the final climb of the day. However, after Devenyns suffered a series of mechanical malfunctions, De la Cruz managed to ride away and seize the stage honors on his home soil.

The Etixx-QuickStep rider now leads the overall race classification by 22 seconds ahead of Nairo Quintana and his Movistar teammate Alejandro Valverde by 41 seconds.

Boldness remains the key in this Vuelta, now led by David De La Cruz, who broke away with 11 other riders to give Spain its first stage win in this edition while taking the red jersey away from Nairo Quintana in Oviedo. The Catalan rider dropped his last breakaway companion, Belgian Dries Devenyns (IAM Cycling), in the last 600 metres to give his Etixx-Quick Step team their third stage victory in this Tour of Spain. Italy’s Moreno Moser (Cannondale-Drapac) was third. The pack, led all day by Quintana’s Movistar team-mates visibly content to let the red jersey slip away, crossed the line at the top of Alto del Naranco 2:55 after De La Cruz with another Etixx rider, Gianluca Brambilla, leading the way.

Among the 12 escapees, three at least were battling it out for KOM points. De Gendt was first at the top of the Puerto de San Isidro (2nd cat, km 60), ahead of Geniez and Clarke. Same result for the top two spots on the Alto de Santo Emiliano (km 117) as the breakaway group led the pack by five minutes. After picking the points and taking the polka-dot jersey away from Sergey Lagutin (Katusha), De Gendt went on on his own for a while but was quickly pulled back. He still collected three more points in the km 135 Alto de San Tirso (3rd cat) ahead of Clarke and Geniez.

Attacks by Devenyns and Bakelants shook the leading bunch in the last 25 km but the two Belgians were reeled in ten kilometers further down the road. Devenyns tried again, this time with De la Cruz after the Alto de la Manzaneda (Km 52), on which Geniez snatched the three points.

At the foot of the Alto del Naranco, De Gendt surged to chase behind the two front riders, but too late. Devenyns, who will join Etixx-Quick Step next season, was unable to change gear when De La Cruz attacked and the Spaniard went all the way to his most prestigious victory to date.

Behind, the main pack climbed the Alto del Naranco together and finished within three minutes of the escapees, not enough however to avoid another change of leaders. De La Cruz now leads Quintana by 22 seconds and Alejandro Valverde by 41 seconds ahead of another crucial stage finishing at the Lagos de Covadonga.