CapoVelo.com
CapoVelo.com - - Watch for Laws that Require Cyclists to Get Out of the Way of Driverless Cars
53452
post-template-default,single,single-post,postid-53452,single-format-standard,no_animation 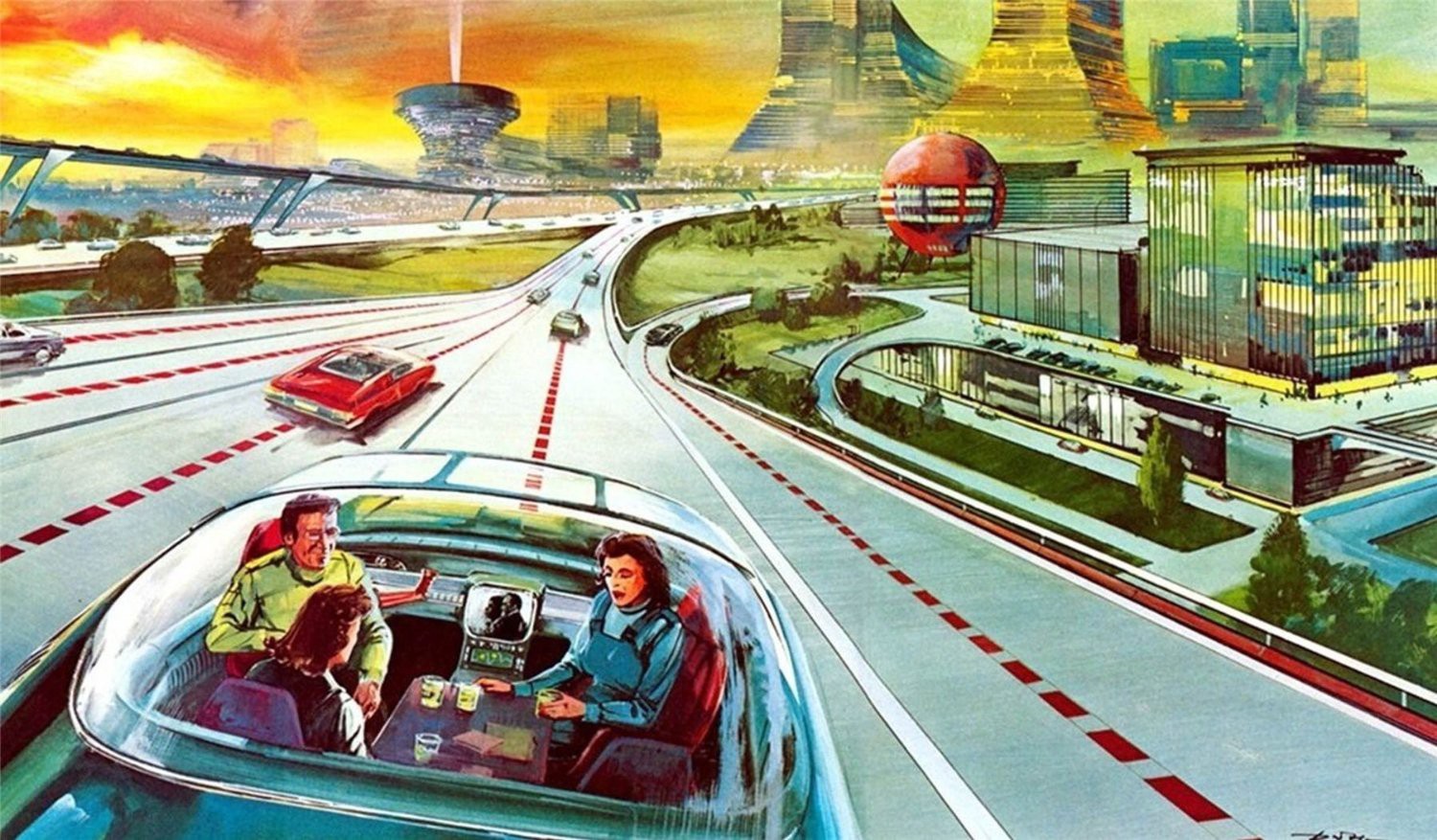 The arrival of driverless cars seems unstoppable, and to be welcomed by all except the most avid of clutch-addled petrolheads. While it’s attractive to imagine a future where the most dangerous component of a car – the nut behind the wheel – has been consigned to history it’s absolutely not certain that this will lead to a utopia for cyclists and pedestrians.

The past can tell us a lot about the future, and the past tells us that we’re very poor at predicting the next transport revolution. 18th-century folk thought canals would last forever. Early 19th-century folk thought the same about turnpike roads. And for those who grew up in the “railway age,” the only future imagined was of steel rails and steam trains. Few predicted the motor car’s eventual dominance, and it’s reasonable to assume that the same inability to accurately predict the future afflicts us, too. As “car age” people, we tend to extrapolate into the future of transport using what we know, and that’s car-shaped objects on roads. Driverless cars – known to futurist wonks as AVs, autonomous vehicles –  are not, in fact, the disruptive technology that many think it is. I’ve been using driverless cars for a great many years, cars which scuttle away and hide when not needed. I can summon one with an app when in a meeting and it will appear outside and whisk me to wherever I want to go. I’m talking about taxis. When I use taxis, including Uber, I can kick back and let the driver – a silent automaton if I so will it – worry about the road ahead.

Where autonomous vehicles might change the world – if we let them – is over who has priority on roads. Currently, driverless cars are programmed to avoid cyclists and pedestrians. In a city full of cars driven by onboard computers it will be a great game to ride or step in front of them, safe in the knowledge they’re programmed not to touch you.

Famously, a cyclist in Austin, Texas, pole-axed a Google driverless car in 2015 when he did a track-stand at an intersection. The Google car was so confused by the behavior of the balancing cyclist it wouldn’t budge.

Google has since improved its algorithms to recognize such bicyclist behavior. In June, a Google statement said: “Through observing cyclists on the roads and private test track, we’ve taught our software to recognize some common riding behaviors, helping our car better predict a cyclist’s course.”

Significantly, for now at least, Google added that “our cars recognize cyclists as unique users of the road, and are taught to drive conservatively around them … enabling our car to better share the road …”

Cyclists sharing the road with driverless cars could become a major issue in the years ahead. Personally, I don’t see how driverless cars will be able to navigate around huge numbers of emboldened bicyclists (or empowered pedestrians), at least not in central business districts. Unless, of course, laws are passed to prevent cyclists and pedestrians from deliberately impeding driverless cars. A tooled-up driverless car of the future might have to be equipped with cameras to record any cyclists or pedestrians who “maliciously” trespass in front of them. Of course, this raises civil liberties issues because to identify the “miscreants” it will be necessary for cyclists and pedestrians to wear identification tags – these need not be large number plates, folks of the future may be embedded with machine-readable ID micro-dots, or their smartphones (or smart bicycles, or smart shoes) could send the identifying information straight to law enforcement agencies. No need for a visit from Judge Dredd, the fine will be deducted automatically from online bank accounts.

Or maybe the future will involve the complete separation of transport modes, with driverless cars running efficiently on roads free of cyclists, and with cyclists – finally – given their own separated cycleways? How likely is that? Outside of the Netherlands, pretty unlikely, it will be easier and cheaper to create laws to stop pedestrians and cyclists from impeding driverless cars.

Car makers are already intimating as much. Introducing a concept driverless car Renault chief executive, Carlos Ghosn, told CBNC in January that the arrival of the technology could be delayed by pesky cyclists.

Ghosn also complained that cyclists were free-spirits: “They don’t respect any rules usually.”

It’s highly likely that other car manufacturers may also wish to clip the wings of cyclists and other non-motorised road users.

Marjan Hagenzieker, professor of road safety at the Delft University of Technology in the Netherlands, told a Dutch news site in December last year that the unpredictability of cyclists “throws a spanner in the work of technology optimists” because “robots are not good at dealing with inconsistent behavior.”

Cycling organizations such as the European Cyclists’ Federation keep a beady eye on legislation likely to have an effect on cyclists across the EU, and to date there’s no indication that driverless car proponents are pushing for the sort of restrictive measures that I pose above as a possibility but it’s very much worth being aware that such laws could be pushed for some time soon, especially by the well-funded makers of AVs.

British cyclists have perhaps most to fear. Brexit – should it ever actually happen – will result in a new and potentially scary legislative landscape where the needs of special interests will hold more sway. The UK Government already seems very keen on encouraging driverless car technology because it’s likely to be an economy-saving money-spinner, and it’s entirely possible that the first laws to prevent cyclists and pedestrians from riding and walking in front of AVs will be enacted in motor-centric Britain. The first widespread UK trials of AVs are taking place in Milton Keynes, not on the roads but on the sidewalks and cycleways – it’s far easier to place AVs on such relatively benign networks compared to busy roads. With thousands, and then perhaps millions, of AVs dotting about on the infrastructure designed for non-motorized users where will be the space for pedestrians and cyclists?

In the early 20th century, motorists didn’t monopolize the streets of cities overnight, they had to fight to suppress the road rights of slower users, muscling cyclists and pedestrians out of the way by killing them or frightening them half to death, and creating the new offence of “jaywalking”.

Google has a patent for a driverless-cars warning system which starts by flashing polite messages on a screen before escalating to increasingly more insistent audible warnings. Perhaps a future patent will suggest driverless cars come equipped with “pedestrian paddles” to nudge human-shaped road users out of the way?

If the siren call from driverless cars of the future is “get off our road!” cynics would argue that such cars won’t be that different from many of the drivers they replace.

*This article was reprinted with the permission of the European Cyclists Federation as part of their Smart Cycling Series.