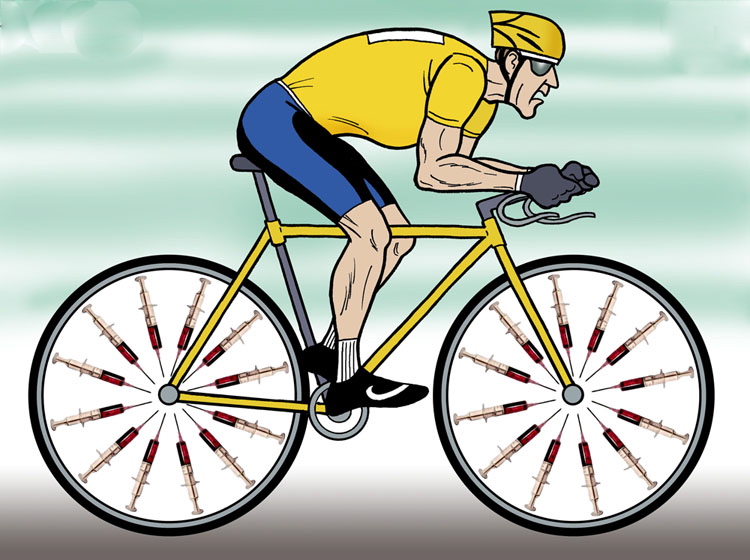 Two years after Lance Armstrong’s doping admission made a mockery of professional cycling, not much has changed. That is the conclusion of the long-awaited report from the Cycling Independent Reform Commission (CIRC), which cost £2m to tell us what many already suspected.

Even the much-vaunted biological passport has not deterred the dopers. Introduced several years ago, it gives each athlete an individual electronic record of their blood and urine levels to make it easier for dope tests to spot deviations from the norm in each individual case. But the CIRC report found that cyclists simply take micro-doses to leave a minimal trace on the record.

So the current anti-doping system isn’t working, and by my rough calculations based on the income of the World Anti-Doping Agency and national equivalent organisations, it costs the world upwards of £50m a year across all sports. Continuing in this vein means throwing more money at something that seems impossible. So if our top-down, heavy-handed, science-driven anti-doping policy hasn’t worked, what are the alternatives?

One obvious alternative is to abandon the pretence of clean sport altogether. This would arguably respect the traditions of the sport: back in the 1960s, for example, the world-leading French cyclist Jacques Anquetil favoured this kind of liberal approach. The five-time Tour de France winner (before dope tests were introduced) argued that cyclists should be allowed to make their own decisions about doping.

Since then, large numbers of cyclists have actively pursued the latest drugs, seeing the authorities that try to stop them as the enemy. This cat-and-mouse game has proved expensive for sport in terms of both finance and credibility, and has led to situations of cyclists being unfairly and inconsistently punished.

While allowing doping would be controversial, there are comparisons. In boxing, for instance, modern-day participants know and accept the risk that they could incur brain injuries. In that sense, if all cyclists accepted the use of drugs in the sport then their decision would be a similar one based on the health risk that such drug use involves.

A second approach, in order to mitigate this health risk from doping, would be to allow it only under medical supervision. Several prominent academic health researchers have argued that the present risks would be substantially decreased if cyclists were able to access accurate information on the drugs.

As the CIRC report noted, cyclists often experiment with weight-loss supplements, painkillers and other drugs. It’s well known that turning to black-market supply chains and unethical doctors can increase risks. We also know from the CIRC that doping appears to be spreading into amateur cycling. So rather than spending money on propping up a broken system, why not use it to make medical advice freely available for all cyclists? To help combat the amateur problem, this could be part of a broader public-health strategy.

Like over-the-counter medicines, the approach to doping in cycling would be to assume that individuals could make informed, mature decisions regarding their own health. There is nothing to suggest that cyclists really want to kill themselves for the sake of their career.

What does anti-doping set out to achieve? The argument that anti-doping protects a level playing field or the sport’s image are spurious, as doping is only one small factor that can influence success in sport. There is no level playing field, and the image of sport is constantly undermined by the behaviour of athletes on and off the field. For me, the best argument for regulation is that it helps to protect the health of the athlete.

Without asking the public to become more tolerant of drugs in sport as per option two, instead a compromise might be to move to a lighter-touch process of self-reporting, medical monitoring, and perhaps even a form of doping quality control imposed by team managers.

Cyclists would need to prove they are in reasonable health before they could compete, and would be required to provide information to show they were monitoring their drug use as part of that. But there would be no obligation on the doctors to report such drug use to the authorities, and testing would be reduced and focused on health factors. The system would prioritise risk reduction and support for individual cyclists. This is the option that looks comparatively the most reasonable to me.

Even though it might be easier to get the public to accept a decriminalised system, popular (and political) revulsion at the very notion of such liberalisation would still be the greatest hurdle to overcome. So we would need to shift attitudes too.

We should ask professional and amateur cyclists alike about what they would like their sport to do about doping. Remarkably, no one has done this before. After consultation, cyclists may come to feel responsible for the policies they have helped to create.

If they favoured a system closer to the status quo than options one to three, this may lead to some significant self-policing within the sport, and more social stigma around stepping out of line – if cyclists come to believe they are betraying others, they may think twice.

Of course, we can’t know in advance whether the athlete’s majority view would be deemed acceptable by the sport’s governing bodies, sponsors or the watching public. All the same, it would be a genuine leap of human faith to include the subjects of these policies in the policy-making process.

Wherever world cycling goes after the CIRC report, we all need to recognise that the future of the sport might depend on the compromises involved. The starting point must be to accept that more of the same simply will not suffice.

Dr. Paul Dimeo is a senior lecturer and Fulbright Scholar at the University of Stirling, whose area of expertise is related to drug use in sport and the development of anti-doping policies.