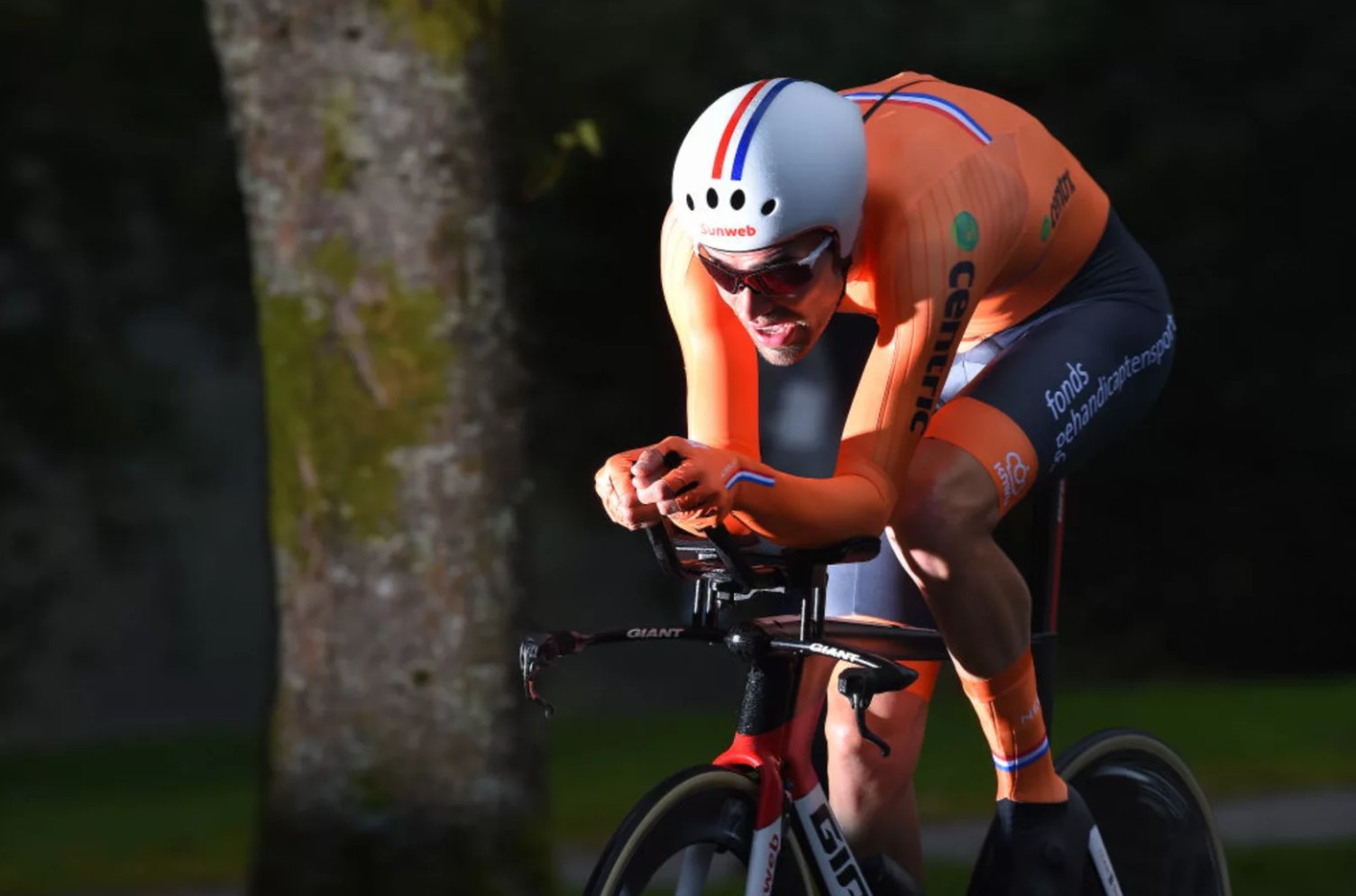 The 26-year-old Dutch rider stopped the clock on a 31km course in Bergen, Norway, in 44 minutes 41 seconds, which was 57 seconds faster than runner-up Primoz Roglic, of Slovenia, and 1’21” quicker than runner-up Chris Froome, of Great Britain.

Dumoulin, who was quickest at all five intermediate time checks, said:

“I cannot believe it. It is really amazing. I had such a good day. I thought my power meter was off because it was so high. I felt really, really good.”

“Then it started raining and I needed to take the corners really slow, especially in the first 1km of the climb, with all the twists and turns. Every corner my back wheel was slipping because I had my TT tyres on because I thought it was going to be dry.

“I though at first, definitely bike change, but then I saw the climb for the first time last Friday and then I was already doubting. Yesterday I made the decision, ‘No, let’s not take the risk, I think I’m one of the guys who can do a really good climb on the TT bike, I have no problems handing it’. I think it was the better decision.

“The double is amazing. Last Sunday was very surprising that we won with the team. Today is maybe less surprising; I think I was maybe one of the favorites. I was calm and I was on a good day.”

The unusual course featured 28 opening kilometers of relatively flat terrain followed by the 3km climb of Mount Fløyen, featuring an average gradient of over nine per cent. It made pacing problematic, with several riders putting in a good time until the bottom of the climb, then fading.

Jan Tratnik (Slovenia) set down an early fast time of 46-24, the first rider to break the 40kmh average speed barrier. His time stood for a long period before Wilco Kelderman (Netherlands) bettered it with 46-15.

There followed a trio of riders who set very close times, with Nelson Oliveira (Portugal) clocking 46-09.52 to take the lead with Vasil Kiryienka (Belarus) and Gianni Moscon (Italy) within a second.

As the top-seeded riders got into their race, the intermittent times started to tumble. Dumoulin was third quickest through the first time check, and then fastest through the second.

Unlike his Sunweb teammate Dumoulin, Kelderman opted to change bikes for the final climb the line, a tactic replicated to fine effect by Nelson Oliveira, who produced a fine surge on the ascent to move into the hot seat.

The Sky duo of Vasil Kiryienka – champion in Richmond two years ago – and Moscon were almost inseparable on provisional time throughout the course, and both men stopped the clock within a second of Oliveira after each deciding against a bike change.

Alexis Gougeard (France) meanwhile, had looked good value for a place on the provisional podium at that juncture, and after switching bikes, had looked fluid on the lower slopes of Mount Fløyen, only to drop his chain and lose all hope of a top 10 finish.

Roglic was the early pace-setter among the final tranche of riders to set off, and he was 3 seconds quicker than Dumoulin at the first check after four kilometres, but the Dutchman settled into his rhythm and began to take command.

The reigning champion Tony Martin (Germany) was the last rider to start, but he was skeptical of his chances beforehand and he was never truly in the hunt for the medals. He rode consistently across the course, and had the second quickest time after 19 kilometres, but faded as the terrain became more rugged thereafter, eventually placing ninth, 1:39 behind Dumoulin.

Froome, meanwhile, appeared to stake everything on the final haul to the line. He was 10th quickest at the second and third checks, and though he was up to seventh by the base of the final climb, he was already too far behind Dumoulin – some 51 seconds – to entertain any prospect of taking the rainbow jersey.

In truth, perhaps only Dennis might have had the wherewithal to pose a robust challenge to Dumoulin’s pre-eminence, but his crash as conditions grew more treacherous divested the race for gold of much of its suspense.

Dumoulin took few risks as rain fell ever more steadily over Bergen, but still he augmented his advantage all the way to the foot of the final climb. From there, victory was guaranteed.