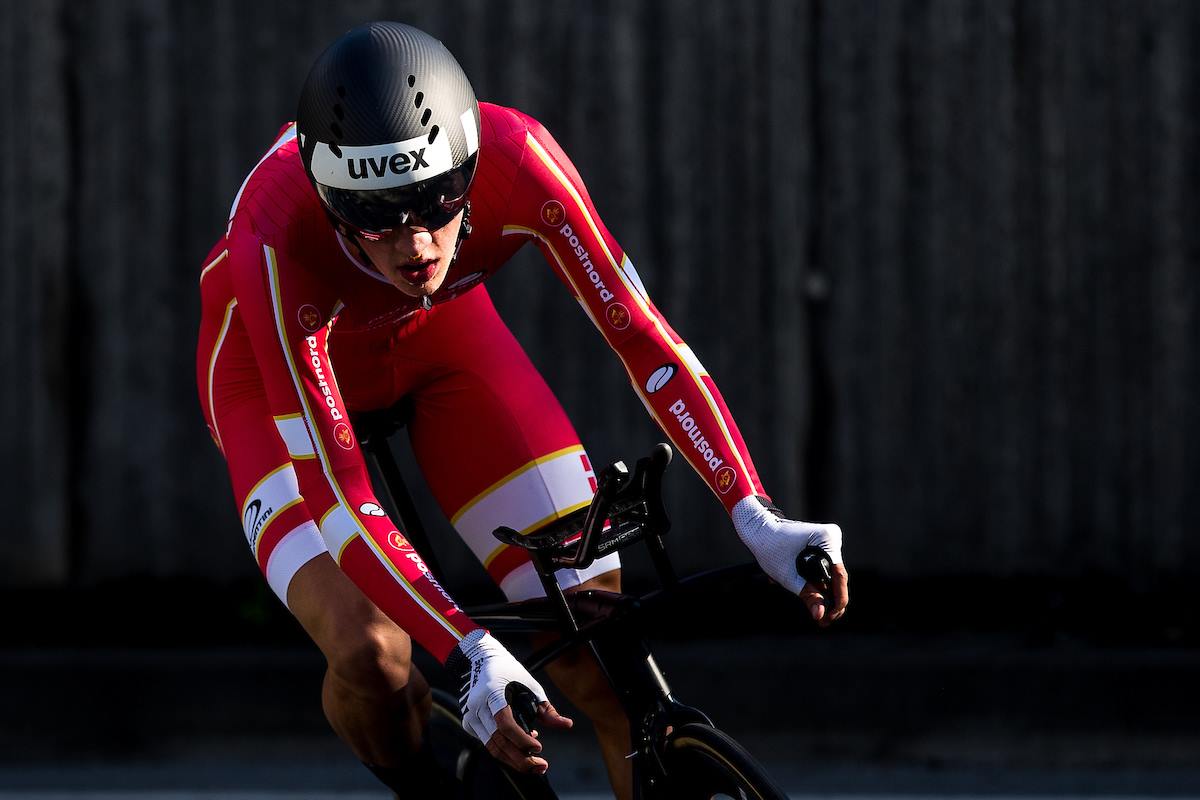 Mikkel Bjerg of Denmark and Elena Pirrone for Italy are the first individual gold medallists of the 2017 UCI Road World Championships, clinching the top honors possible in their respective Men’s Under 23 and Women’s Junior Time Trial categories.

Pirrone’s success comes in the same year that she was crowned European Time Trial champion and 12 months after securing tenth spot in the same World Championships event in Qatar.

The last rider of the 47 starters on Monday, Pirrone said she was at an advantage on Bergen’s rolling 16.1 kilometer course, despite the rain that fell in the last part of the time trial.

“I didn’t expect to win the European Championships, but today I came here feeling very motivated and the course was perfect for me,” she said afterwards. “I gave it my all but it’s true I do better on climbs, too, so having to race on power would have been harder for me.”

“The first part was the most important, the key to the victory. I knew I had to go very fast until the climbs began and I was lucky to start so late, too.”

The first rider down the start ramp and setting the provisional best time, silver medallist Vigilia had to endure losing to Pirrone at the last possible moment. Vigilia could see that Pirrone was going to be a tough rival, though, as her compatriot clocked the fastest time at both intermediate checkpoints, by just three quarters of a second on another Italian, Letizia Paternoster, who then had technical problems and faded to ninth later on.

“I’m not so strong on the cobbles, I maybe lost it there on that part of the course,” Vigilia said. “But I’m really pleased it was Elena who won, we both race for the same team back home.”

Victory in the U-23 Men’s Individual Time Trial went to the talented young Danish rider Mikkel Bjerg, who despite being just 18 clinched a win by a considerable gap of 1-05 on the USA’s Brandon McNulty.

Both Bjerg and McNulty had shone brightly in the 2016 Junior World’s Time Trial, with the American taking the gold last year in that category in Qatar and Bjerg finishing with silver. One year later, and one category higher, they switched positions but promisingly, both still captured the top two results.

An early starter, 19th of the 56 participants, Bjerg had a long wait for his gold medal to be confirmed. But as rider after rider crossed the line, his provisional best time of 47-06, averaging a speed of well over 47 kmh, remained steadily at the top of the leaderboard.

“For sure it’s the biggest result of my career,” the 18-year-old said afterwards. “I knew the course was really tough, and I lost some weight before the big day and tried to pace it as well as possible on the climbs.”

“I could see from the power meter that I would probably make the top five and maybe medal if I was lucky, but then I could see from other riders’ splits that I’d actually done a really good effort.”

Whilst Bjerg clocked the fastest times on all of the rolling, sunlit course barring the first time split, McNulty steadily turned up the power to scale positions with each checkpoint. Twelfth fastest at the opening check after three kilometres, the American soared a provisional third place on Bjerg, 36 seconds back, at the top of the steep Birkelundsbakken climb, 13 kilometres from the finish. Going from strength to strength, McNulty then gained another spot on the sweeping, broad descent to the finish in Bergen’s Festplassen street.

While the winners of the U-23 men’s gold and silver medals looked increasingly clear well before the race was definitively over, the battle for bronze was much tighter, and the USA rider Neilson Powless, sixth in Qatar, was one of the few late racers to make a strong start. Close to the top three finishers on the time splits until midway through the course, Powless was unlucky to crash and slumped to ninth in the final rankings. Instead it was France’s Corentin Ermenault who made a late surge on the 37.2 kilometer course and netted the bronze by just two seconds over Luxembourg’s Tom Wirtgen.