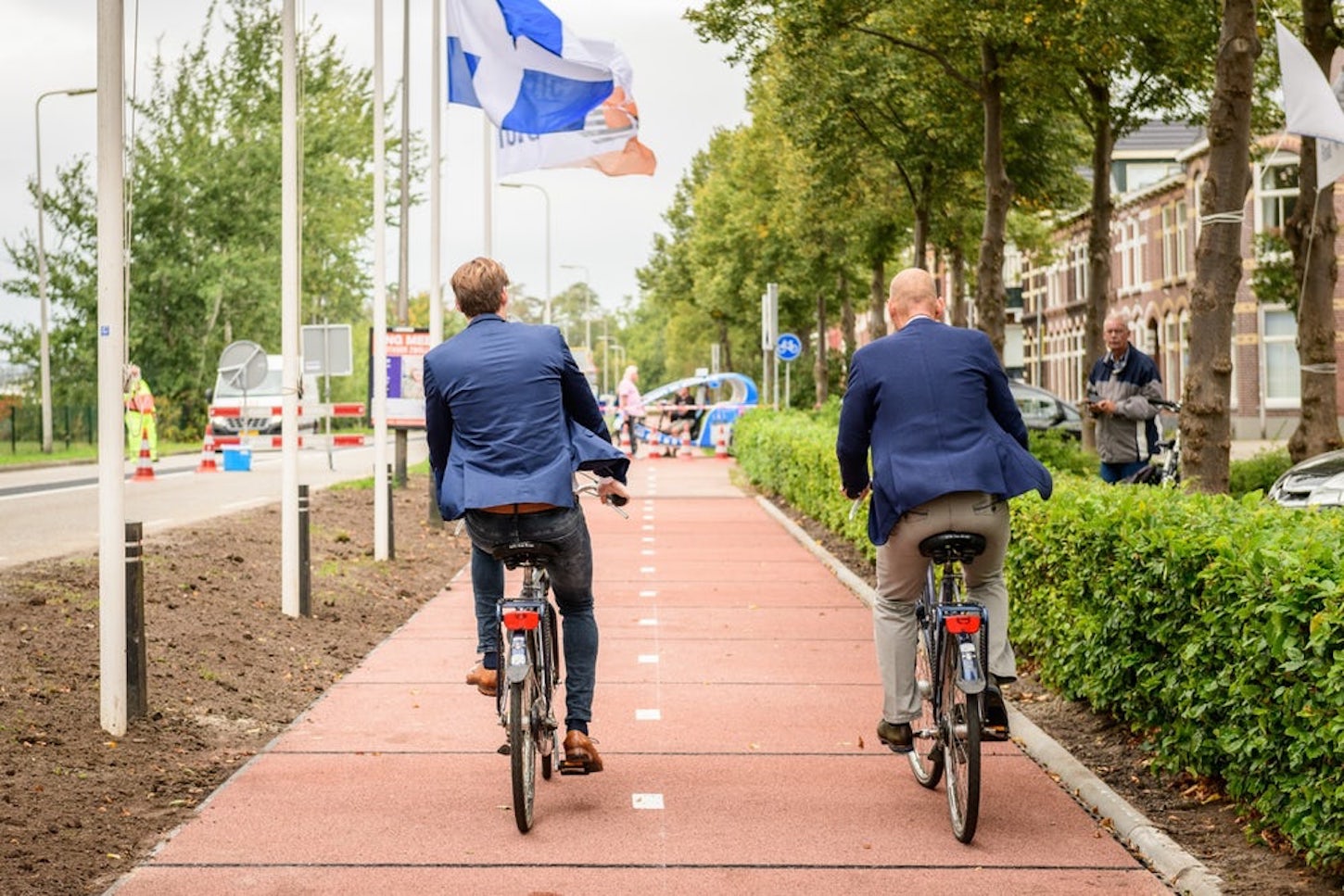 Asphalt may very well become a thing of the past as it relates to bike paths in the Netherlands.

Stretching a short 30 meters (100 feet) in the northeastern city of Zwolle, a new two-lane bike path features a surface that’s paved with the equivalent of a half-million plastic bottle caps and promises to be two to three more times durable than traditional asphalt. Moreover, while the new technology is impervious to potholes and cracks, in the event the path gets damaged or falls into disrepair, it can easily be removed and recycled again.

The path represents the first of handful of pilot projects from PlasticRoad, a recently launched technology spearheaded by the Dutch civil engineering firm KWS in partnership with plastic pipe-maker Wavin and France’s gas and oil conglomerate Total.

Located in the Overijssel province about an hour north of Amsterdam, Zwolle is a beautifully preserved medieval town that boasts a sizable population of more than 125,000 residents, wherein a vast number of its residents rely on the bicycle as their main conveyance.

The new plastic bike path can be found alongside Zwolle’s Deventerstraatweg, a major street that runs along the edge of Assendorp, which is a lively residential district just outside the river-bounded city center.

After Zwolle, the next Dutch municipality to get a plastic bike path will be Giethoorn, which is notorious for being one of the world’s most car-free cities.

That installation is due to take place in November, which according to PlasticRoad will serve a  testbed for new technology features.

Rotterdam is also scheduled to get a plastic bike path at some point as well, which compared to most cycling-centric cities in the Netherlands has been largely dependent on automobiles.

“This first pilot is a big step towards a sustainable and future-proof road made of recycled plastic waste,” explain Anne Koudstaal and Simon Jorritsma, the two KWS consultants credited for conceiving PlasticRoad. “When we invented the concept, we didn’t know how to build a plastic road, now we know.”

The inaugural plastic bike path was constructed off-site as a series of lightweight prefabricated sections that were then transported to Zwolle and linked together in an installation process touted as being 70 percent faster than constructing a traditional asphalt-based road or bike path.

Long-lasting and low-maintenance, the so-called “road structures” are “virtually insensitive to conditions such as weather influences and weeds,” says PlasticRoad.

The modular road segments are also multitaskers, whereby the hollow underside is designed to capture and retain rainwater during flooding, along with plenty of room to accommodate cables and pipes.

As mentioned, the plastic road surface material can be recycled and reused indefinitely. And for the most part, is indistinguishable from the other dedicated cycling paths that traverse Zwolle.

Prior to installation, the sections were outfitted with a series of sensors that monitor a variety of elements such as  temperature, performance and durable and how many cyclists ride along the  bike path at any given time. PlasticRoad notes that, thanks to the presence of all the sensors, the pilot project in Zwolle isn’t just the world’s first bike path constructed from plastic waste but also the world’s first smart bike path.

Based on data collected from the sensors, PlasticRoad will continue to tweak and improve its technology, with the goal of incorporating even more recycled plastic in the process, thus making the ratio of recycled to non-recycled far grater.

“The end goal is to use 100 percent recycled materials for a bike path”, says PlasticRoad.

PlasticRoad notes that of the 350 million tons of plastic that’s consumed annually in Europe, large majority of it winds up being sent to landfills or incinerated, with only 7 percent getting recycled.