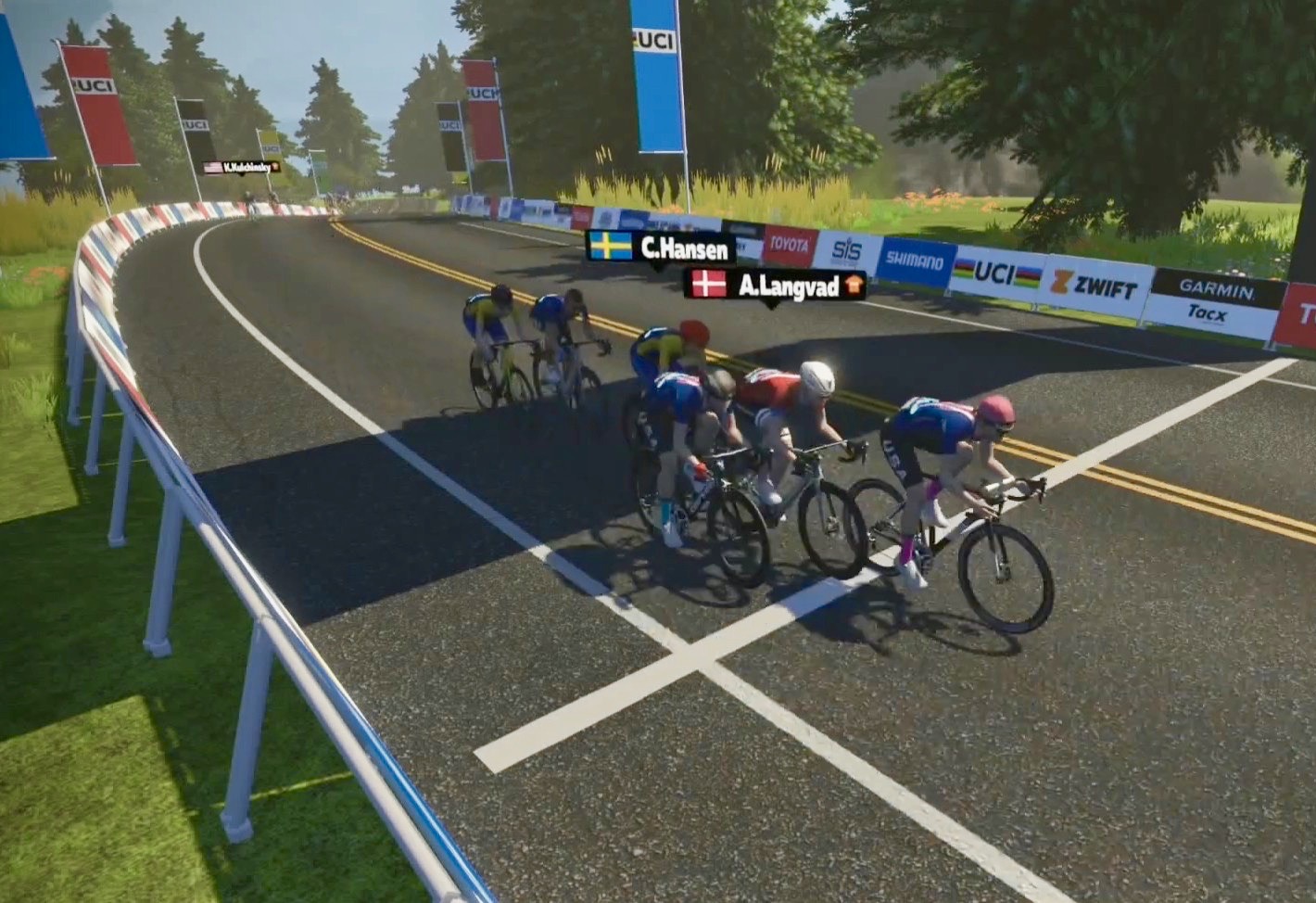 Ashleigh Moolman-Pasio (South Africa) and Jason Osborne (Germany) won the first Zwift UCI Cycling Esports World Championships, held in the virtual world of Watopia this Wednesday. Their powerful rides got them the pixelated rainbow jerseys awarded in this inaugural edition that saw 132 participants connect from all around the world to cover 50.035km on the circuit of Watopia Figure 8 Reverse

“It’s really awesome”, Ashleigh Moolman-Pasio said as she celebrated both her victory and her 35th birthday. “I wasn’t a fan of virtual training before the lockdown but it converted me and I’m super proud to win the first Esports Worlds. I know it’s something quite new but it’s going to become a big thing. In time, more and more will convert. There’s a lot coming and I’m proud to be part of that movement.”

“It was a completely new experience for me”, Jason Osborne reflected. “I’ve raced on Zwift before but this was a much bigger event. The field was very tough with top riders. I just tried to keep calm, keep with the pack and I left it all for the finish.”

It was early afternoon in South Africa when Moolman-Pasio took the start with a peloton of 54 riders in the Women Elite race. They represented 18 different nations, with an additional wildcard team. A handful of them had already conquered rainbow jerseys in different disciplines before tackling the first UCI Cycling Esports World  Championships: the Dutchwomen Anna van der Breggen, Annemiek van Vleuten and Kirsten Wild, Great Britain’s Sarah Storey and Elinor Barker, Denmark’s Annika Langvad…

With about an hour of racing ahead of them, the participants immediately set a high pace. They soon hit the first climb of the day, Zwift KOM Reverse, followed by the Zwift KOM after 20km of racing. Both climbs feature maximum gradients of 8% and the riders had to face them twice, with a summit finish atop the second ascent of Zwift KOM.

The race split over the climbs and the front group was down to 25 riders after the first lap, including Moolman-Pasio. Riders from the USA tried to make the most of their numbers (9 starters) around Lauren Stephens, one of the day’s main favourites, while the likes of Van Vleuten were dropped.

USA’s Jacquie Godbe upped the ante in the penultimate climb, pushing more than 8 watts/kg. Then Kristen Kulchinsky took over at the front with 14km to go, before another move by their teammate Courtney Nelson with a Lightweight powerup.

Godbe and Moolman-Pasio accelerated again inside the last 3km. USA’s Christie Tracy used her Lightweight to get away from everyone with 1.5km remaining, opening up a 4” gap ahead of the 900m uphill finish.

Moolman-Pasio put the hammer down on the steepest slope of the final climb. Australia’s Sarah Gigante managed to follow her but the South African star maintained her effort until the line to take victory ahead of Gigante and Sweden’s Cecilia Hansen. Lauren Stephens had to settle for 4th. Moolman-Pasio covered the 50.035km in 1h13’27” with an average of 4.4watts/kg.

The Men Elite race followed a similar pattern to the women’s race with strong riders steadily dropping due to the hard pace set over the climbs. Riding his fourth UCI World Championships this year, Tom Pidcock accelerated with 18km to go but everyone reacted behind the British rising star.

Things got even harder when the Australian Freddy Ovett, winner of a Virtual Tour de France stage during the summer, went for another dig inside the last 15km. This move opened another host of attacks, with the Belgian and Canadian squads also trying to turn the race upside down.

Attacks kept flying until the holder of the UCI Hour Record timed by Tissot, Victor Campenaerts, hit the bottom of the final climb at the front of a group ready to battle it out. Germany’s Jason Osborne perfectly timed his effort to go solo on the climb with a power peak above 12 watts/kg. With a time of 1h05’15’’ and an average of 4.7watts/kg, he took the rainbow jersey ahead of two Danish riders: Anders Foldager and Nicklas Pedersen.