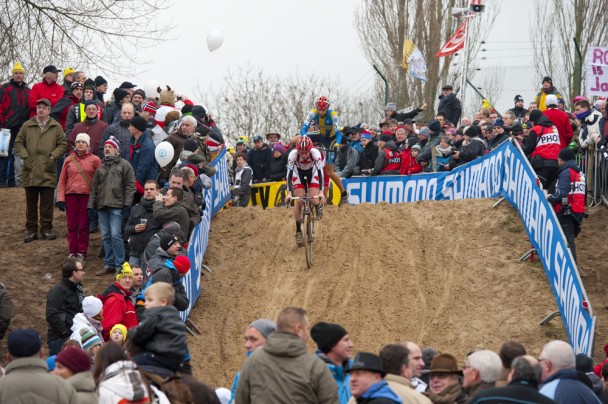 The championship race was held for the second straight year at the South Surrey Athletic Park.  The course included long muddy straightaways, three sandpits, a staircase run-up and a set of barriers. Rain poured for most of the day causing the already challenging course to be covered with thick mud.

Garrigan, Kabush and McNeely gained a few seconds on Schooler, who crashed through a slick corner on the second lap.

Kabush put pressure on the group until he opened a small lead on the third lap. Schooler recovered from his crash enough to catch and pass Garrigan and McNeely, but Kabush was already 10 seconds ahead.

Not too far back, Kabush’s teammates Cameron Jette and Derek Zandstra worked together to close the gap to Garrigan and McNeely, and eventually found themselves riding for third place.

Kabush finished the race by a minute ahead of runner-up Schooler and nearly two minutes ahead of Jette in third place and Zandstra in fourth.

Van den Ham soloed to the win 35 seconds ahead of Nadon in second and Wilson in third place.

“I feel absolutely amazing, to be out here, this course is so great,” Van den Ham said. “It’s a goal that I barely imagined was possible even a year ago, two years ago, I wouldn’t have dreamed about it. To actually cross the line first . . . it’s great, it shows all the support I have from my coach Shawn Adamson, Cycle-Smart and all my sponsors. It feels awesome.

“On a course like that, the worst part is often the best part too, the most fun. There are a lot of sections on this course where you have to choose whether to run it or ride it. Riding it might be faster, it might be safer. So all those spots where you had to make decisions really shows the quality of the course and it really made me think.”