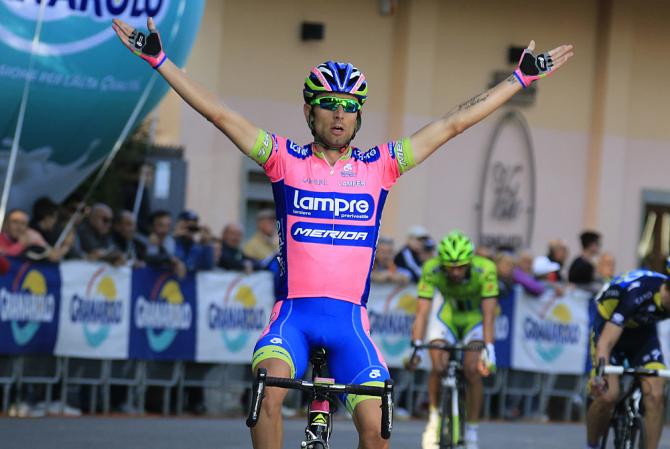 In addition, the 24-year old Italian won a stage and the overall in the Coppi e Bartali in March and went on to win a stage of the Tour de Pologne in late July.

"It ‘s the sixth win of a season that has given me important confirmation," he said. "It is not easy to get so many victories. It means that I am on the right path to further improvement towards a higher level, led by people in whom I have great confidence."

As soon as the group was caught, Lampre made things difficult over several passages of the steep San Luca climb. Both Winner Anacona and Kristijan Durasek put in a valiant effort, while at the same time covering a move by Androni Giocattoli’s Emanuele Sella. However, final climb  up the San Luca was set with a fierce pace by Michele Scarponi – until Ulissi took things into his own hands.

"Once again, I finalized a magnificent work done by all Lampre riders during the race," he said. "The blue-fuchsia-green were always in the spotlight. First Anacona tried to escape from the peloton. Then Mori hit the main breakaway of 14 riders which was caught on the second passage of San Luca. At that point, Durasek and Cunego went into action and forced our opponents to react. I always had Scraponi at my side. Michele set me up on the last lap and once again I had good legs in the finale."