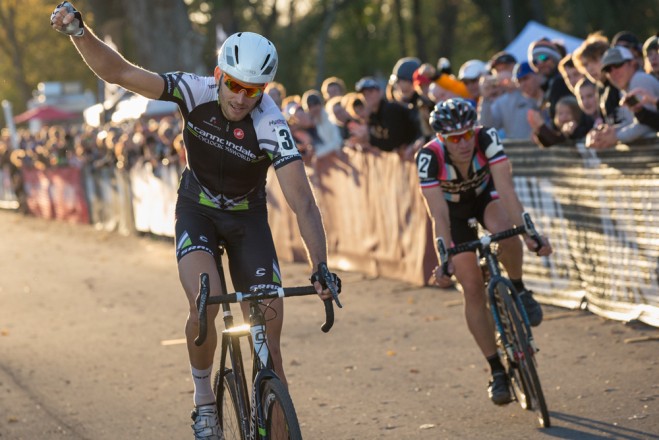 When Ortenblad couldn’t maintain the pace, Trebon Powers and Berden quickly took over.  And with three laps to go, a three-way battle ensued.

Berden was first to fall off the pace, while Trebon and Powers continued to battle each other.

In the final lap, the lead went back and forth between the two – but, just before the paved finishing stretch Trebon upped the pace – leading out the sprint just ahead of Powers. Berden took third.

“I was a little bit less strong than those guys,” conceded Berden.

In the women’s race, Katie Compton took and early lead – and remained out front for the duration of the race – soloing to victory.

As Compton continued to pull away, only Anderson was able to maintain some measure of distance.

At the end of the first lap, Compton had created a 4 second gap over Anderson, with Duke and Miller 10 seconds back.

By the second lap, Anderson was more than 10 seconds down with teammate Miller closing in on her.

With three laps to go, Compton was 24 seconds ahead of the chase. And, Anderson who was still hanging on in second, was quickly caught by Miller and Anthony.

A couple of mishaps in the next lap, eliminated Miller and Anderson from the chase – leaving Anthony to try and catch the leader alone to no avail.

Compton said she was pleased with her performance.

“I’m getting faster and faster and starting to feel better. I’m happy to have my legs come around,” she said.