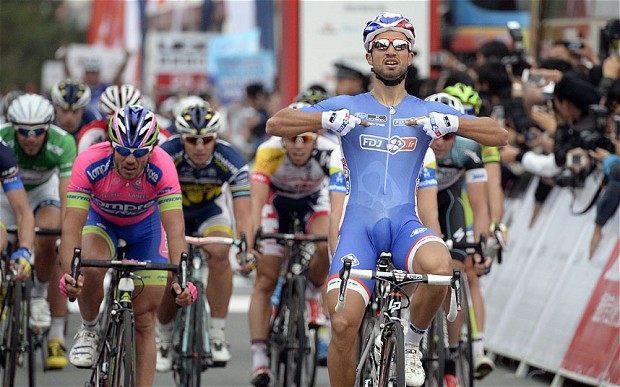 The French rider prevailed against Michael Matthews and Aleksei Tsatevich in a sprint finish after 176 kilometers of racing that involved seven challenging climbs.

The finale saw world champion Rui Costa attack on the final climb – however his efforts were neutralized by two-time Tour of Beijing winner Tony Martin.

Indeed, the German rider at one point opened up 100 meter lead on the descent, with Costa trailing – however – Bouhanni succeeded in closing the gap.

With Martin’s challenge over, team Omega Pharma-Quick-Step began the lead out heading into the final 500 meter finishing straight – with the hope of setting up their sprinter Alessandro Petacchi. But, once again it was Bouhanni who managed to accelerate on the outside – leaving Elia Vivani, Michael Matthews and Aleksei Tstatevich to battle it out for second and the third positions.

In the end, it was Matthews ahead of Tstatevich with Viviani missing the podium.

“I was behind Viviani with 250 meters to go and I went on the left and I didn’t hesitate,” Bouhanni said of the run into the finish.

As fast as he crossed the finish line, Bouhanni was just as quick to pay tribute to his teammates who spent much of the stage on the front of the peloton – controlling the race.

“It was hard but I had a super team to support me and I didn’t want to disappoint them and I went for it,” he said.

The 23-year old started the day with a one second advantage over his rivals in the battle for the red leader’s jersey – and following today’s win – the Frenchman extended his lead by an additional 10 seconds.

Thor Hushovd was forced to abandon the race on Saturday night, flying home to Norway to be with his daughter who is ill in hospital.

Bouhanni, despite his good fortune on today’s stage, doesn’t expect to still be in red on Monday.

“The fifth stage, yes, I’d like to win but tomorrow will be a bit too hard,” he said.

Tomorrow’s stage will feature a final summit finish on Mentougou Miaofeng Mountain – preceded by the long, steady climbs of the Xian Ren Dong and Gao Ya Kou.