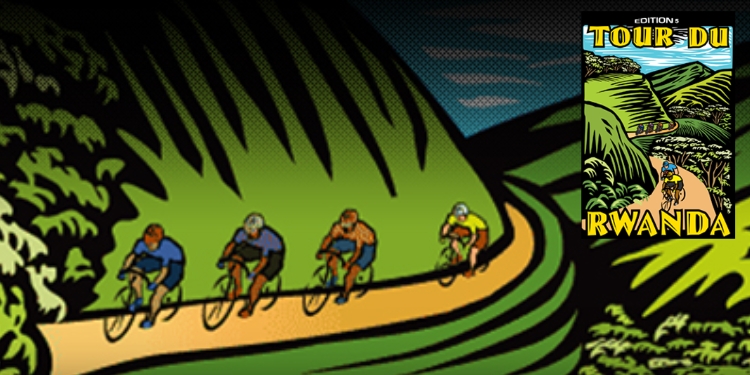 Hadi Janvier wins the prologue of the Tour Du Rwanda in 2013.
The Tour of Rwanda 2013 got off to an amazing start today with a circuit around the Amahoro Stadium of Kigali. Consisting of a prologue, an individual time trial of 3,5km.

Huge crowds cheered young talent of Rwanda Janvier Hadi, who realized the best time behind the French Nicolas Lefrançois at 3 seconds. He is the second Rwandan to win a stage in the Tour of Rwanda after Joseph Biziyaremeye in 2011.

“It’s my first big victory, Hadi said, it’s the result of my training with Jock Boyer. I was never so happy.”

Hadi surrendered it to Team MTN-Qhubeka’s Jay Thomson who put up a strong performance on the stage which has a distance of 129.9Km. The South African from the start was a strong contender.

Thomson, who clocked 3h16’15”, was followed by Eyob Metkel of Team AS.BE.CO Cycling teamand Team MTN Qhubeka’s Louis Meintjes who came third with 3h16’21” on the general time board. Dylan Girdlestone of Team South Africa is 3rd in general classification.

Eyob Metkel of AS.BE.CO Cycling from Eritrea is fourth in the general classification while John Njoroge of Team Kenya is in the 5th position. In the sixth place is Paul Van Zweel of Team South Africa and Rwanda’s Hadi comes in the 7th position.

The 22 year old has managed 3h16’40” ahead of Lefrancois Nicolas and Van Zyl Johann. Joseph Biziyaremye is in the 19th position ahead of crowd favourite Adrien Niyonshuti who is racing for MTN Qhubeka. Niyonshuti finished strongly in the 9th position on the first day, improving his ratings.

Niyonshuti, who recovered in time to participate in the 5th edition of Tour of Rwanda, was racing in his home area of Rwamagana district where he was welcomed by huge crowds.

“I really didn’t have enough time to train. I was totally down for over two months. It is my pleasure to have recovered in time to take part in this year’s Tour of Rwanda,” said Niyonshuti, who has been out of action since February this year when he was diagnosed with a blood clot.

Hadi on the other hand said the first stage was somewhat challenging but said Rwandan cyclists will put up a spirited performance on the Tuesday stage from Rwamagana to Musanze, which will be the longest stage of the tour, covering 151.5km.

“Our strength lies in the Northern part of the country where we have been training for more than three months. We think here we will have an edge since we know the place better,” said Hadi.

The president of Rwanda Cycling Federation (FERWACY) Mr Aimable Bayingana said that he is confident that Rwandan teams will challenge for the title this time despite the strong teams taking part in this year’s tour.

“The teams are strong this year, the likes of MTN Qhubeka but we believe Rwandan riders are in good shape and will give it their best shot,” said Bayingana shortly after awarding the stage winners.

After putting up an incredible performance, the stage winner Thomson said that the first stage was challenging.

“I am a bit concerned at the moment because I have been told that this is not even the most challenging stage of the tour but I am prepared to take on every stage as it comes. Today it has been an amazing team effort. We were a strong unit throughout,” said Thomson.

The South African national champion crossed after launching a spirited attack. The result moved Thomson into the overall lead with Meintjes in second place, two seconds behind.

The duo shielded off stiff competition from Jay Robert Thomson of Team MTN Qhubeka who despite coming third retained the Yellow Jersey in the general classification.

The home boys strolled into the Northern Province town amid wild cheers from the record crowd which waited for them. The victory could not have come in a better place with the national team based in the usually chilly town at the foot of the volcanoes.

Ndayisenga, 19, won the longest stage of the tour with a distance of 151.5Km from Rwamagana to Musanze, boosting Rwanda’s chances of winning the tour since it was put on the international cycling calendar.

No Rwandan has ever won the Tour of Rwanda which is now in its 5th edition.

The president of the Rwanda Cycling Federation (FERWACY) AimableBayingana said that the country’s chances have been buoyed by the Tuesday performance which saw six Rwandan riders finishing among the top ten.

“It has been an outstanding performance. I strongly believe that if they continue like this, there are high chances of Rwanda winning this year’s edition. The boys are beginning to feel confident that they can take on their more experienced counterparts,” an elated Bayingana said.

Ruhumuriza put up a spirited performance finishing second in a race which had been earlier led by Nathan Byukusenge for a larger part and Hategeka Gasore who withered at the highest climb of the day at Buranga.

It is estimated that close to one million people watched the second road stage with crowds of people greeting the riders throughout, the biggest at Nyabugogo.

Team Rwanda coach Jock Boyer was equally thrilled at the performance of his team which showed a lot of energy as the stage neared to an end with the South Africans grouping up.

A peloton of 14 riders formed towards the end of the stage but Ndayisenga and Ruhumuriza burst out with energy breaking away with Thomson trying to keep the duo in check. The South African champion however could not match the energy and speed of the Rwandans, settling for 3rd place.