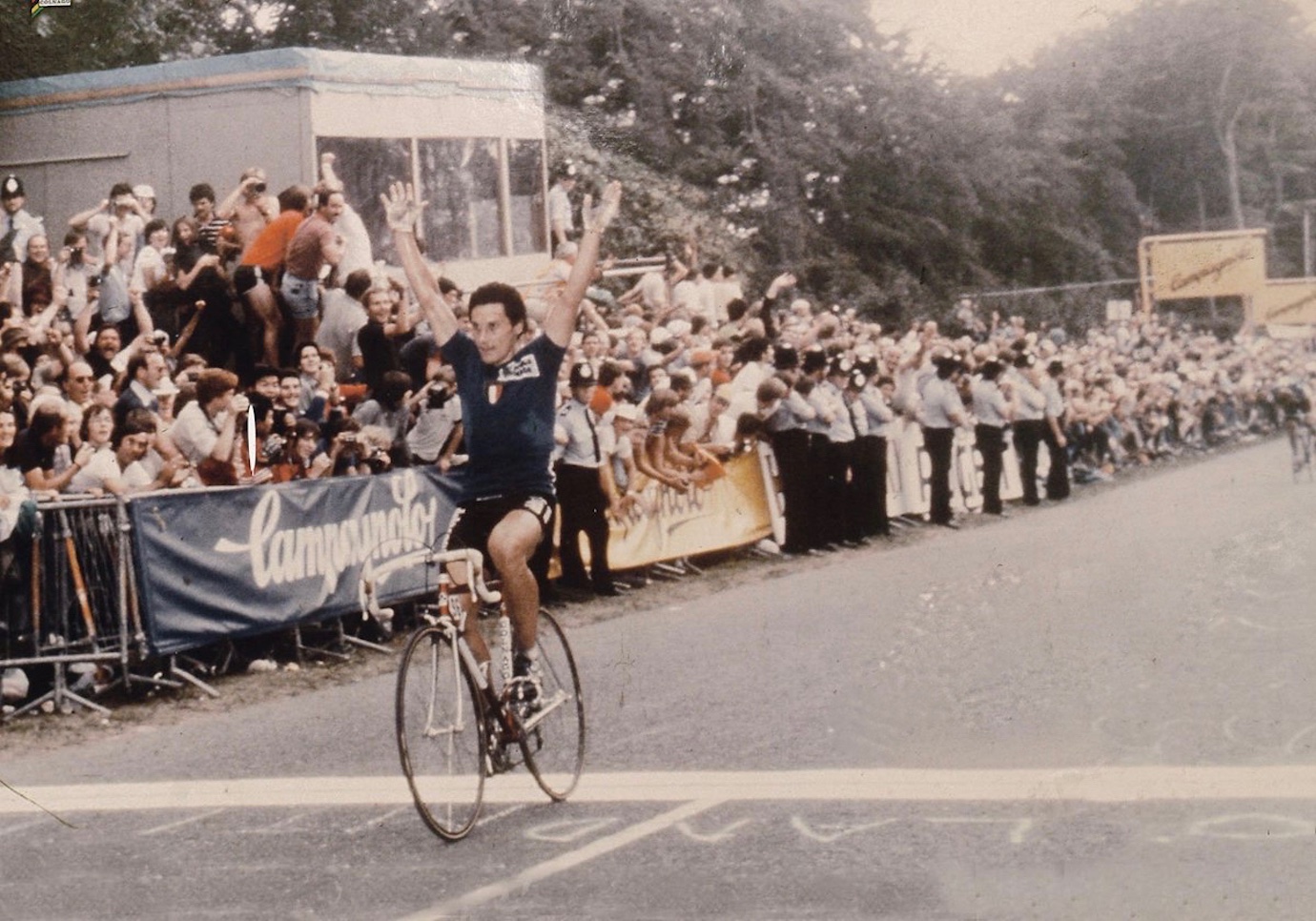 A belated happy birthday to Giuseppe Saronni, who was born on September 22, 1957.

Both a talented sprinter and climber, the Italian rider proved his mettle in both Grand Tour events and One-Day Classics, as well as World Championship Road Races.

Indeed, Saronni won the Giro d’Italia in 1979 and 1983, finishing ahead of Francesco Moser of Italy and Bernt Johansson of Sweden in his first of victories, and later ahead of Roberto Visentini of Italy and Alberto Fernandez of Spain.

But, perhaps his most memorable One-Day victory occurred in 1982, when he won the World Championship Road Race in Goodwood, England ahead of Greg Lemond of the United States and Sean Kelly of Ireland.

His final sprint was so impressive that journalists called him La fucilata di Goodwood, “the gunshot of Goodwood”, which came with great solace, as his hopes for winning the gold medal the previous year were thwarted by Freddy Maertens of Belgium during the final sprint.

Saronni also won the prestigious Trofeo Baracchi in 1979 and 1986, while racing alongside Francesco Moser and Lech Piasecki.

Created by Mino Baracchi in memory of his father Angelo, who was a great tifoso of the sport, the Trofeo Baracchi was a major Italian race that ran for 50 years.

Originally held as an amateur individual time trial in 1941, from 1944 it was opened-up to professionals and became a major event on the European calendar.

The race initially took place every two years. But, in 1949 it became an annual event and adopted the two person team time trial format. It continued with this formula until 1990.

The last running of the event was held in 1991, which reverted back to being a solo time trial and was renamed the Grand Prix des Nations.

Saronni was born in Novara, Piedmont, Italy and turned professional in 1977, while riding for the well-known Scic team.

This was followed up with three stage wins in the Giro d’Italia and overall victories in the Tirreno-Adriatico, Coppa Agostoni and the Giro di Puglia the next season.

Along the way, Saronni developed a famous rivalry with fellow Northern Italian, Moser.

“I had several high-profile rivals, but Giuseppe Saronni was the biggest of them. This wasn’t because he was necessarily the best rider I rode against, it was more that he was Italian as well. This made it a special rivalry and one that the press built up. It seemed to divide the whole nation in terms of who the general public supported”, Moser said during an interview with the Cyclist in 2015.

Additionally, historians suggest that race officials for the Giro d’Italia further exhorted the fierce rivalry that existed between them by “tailoring” the routes with “flatter” stages that benefitted the riding style of both men.

During his 12-year career, Saronni won as many as 210 races across virtually every discipline of cycling.

After his retirement in 1990, he went on to manage a number of prestigious teams such as Lampre-Colnago, Mapei-GB and Lampre-Daikin.

He currently serves as the general manager of the recently formed UAE Team Emirates WorldTour team.