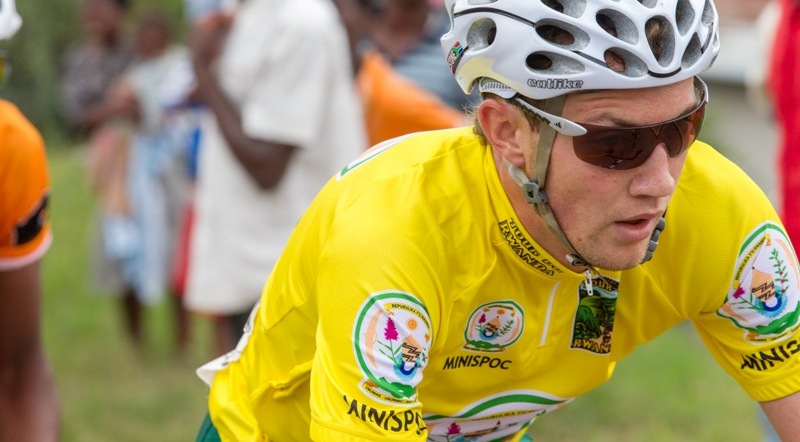 Girdlestone finished fifth on stage 6 from the southern province town of Huye to Kigali-just enough to make him keep the yellow jersey, still with some advantage of 02’ 01” ahead of his country mate Louis Meintjes who races for MTN Qhubeka.

Meintjes finished third after the 128KM stage which was tightly contested with the riders arriving almost in a single peloton at StadeRegionale in Nyamirambo.

Eritrean EyobMetkel who races for AS.BE.CO took the stage after upstaging the South Africans on the final climb which ended the stage. It’s the first stage to end with a climb, which really gave Metkel an edge over the rest.

The Eritrean has been the best climber throughout the tour, conquering all the ascents with consistency. But Girdlestone’s steady performance ensures that he remains with the yellow jersey.

The 24 year old South African has kept atleast a top five finish since the start of the race which means that he will enter the 7th and final stage with only one aim of defending the yellow jersey.

Any slip up, which is highly unlikely, means that Meintjes and Metkel, who are 02’ 21” and 02’ 20” respectively, could pounce but Girdlestone will most likely ease his way to victory during the Sunday final stage.

The stage which will be around the city of Kigali will cover some 94KM of urban racing which has less challenging routes.

Speaking earlier today, the President of the Rwandan Cycling Federation AimableBayingana said that this so far has been the most tightly contested Tour of Rwanda, with a majority of teams showing the intent to win.

“This year we heard more professional riders like never before and a number of them came when they were in a rich vein of form. The bar was set high this year,”

“We think Rwandans did very well but the competition has been stiff and the individuals leading have impressive records,” Bayingana said after the Saturday awards ceremony.

Rwanda’s Jean BoscoNsengiyumva finished 3rd on the 6th stage, emerging the best Rwandan rider so far, in 6th position on the general classification.Debretsion Aron also from AS.BE.CO finished fourth ahead of Girdlestone.

The Kigali stage will go through Remera and the Kigali Special Economic Zone which boasts of smooth, newly done circuit-liked roads with beautiful turns.