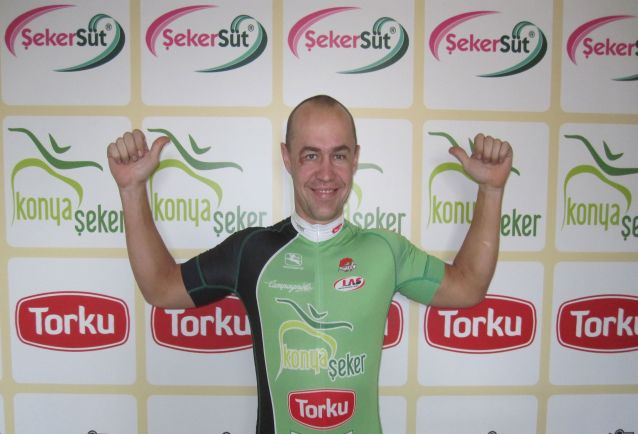 Yuriy Metlushenko scored back to back wins – by winning stage 2 of the 2013 Tour of Taihu on the Island of Shuangshanandao today – after beating Alois Kankovsky and Yannick Martinez in a sprint finish.

"I thought I’d lost the jersey and the race when eight riders were still away at bell lap," Metlushenko said.

"It’s unbelievable that the bunch came back together but other teams closed the gap: Burgos-BH, Blue water and the Portuguese . I was left with only two teammates, Ahmet Örken and Sergey Grechyn, who led me out and yelled at the last kilometer mark.

"You can’t fail!’ I can’t ask too much to my other teammates who are suffering the jet lag. At the start, we planned to let a breakaway of three or four riders go and collect the time bonus. We wanted a quiet day but it didn’t happen like that," he said.

"It was another fast running at a crazy speed, and Yuriy got it again, but I’ll beat him before the end of this race," promised best young rider Jesse Kerrison of Budget Forklifts, who finished fourth after losing the slipstream of his lead-out man with 1.5km to go.

"In the echelons, it was a good day for us, we showed the peloton that we can be respected," the Queenslander said. "For me, this is a great learning experience."

Third place finisher Martinez seized the opportunity to jump into the fray in the final 300 meters, when his teammate Justin Jules was unable to stay onboard in the with the leaders.

"I want to ride for the GC here after I grabbed a time bonus yesterday in the intermediate sprint and today at the finish," said the Frenchman, who moved up to fourth overall with the same time as Kerrison.